Election Day is almost upon us, and with it comes enormous attention to exit polls that detail how various demographic groups ended up voting in the presidential race. When it comes to estimates of the Asian American vote, evidence from the 2016 election show that we need to understand the limitations of different exit polls and temper our interpretations accordingly. 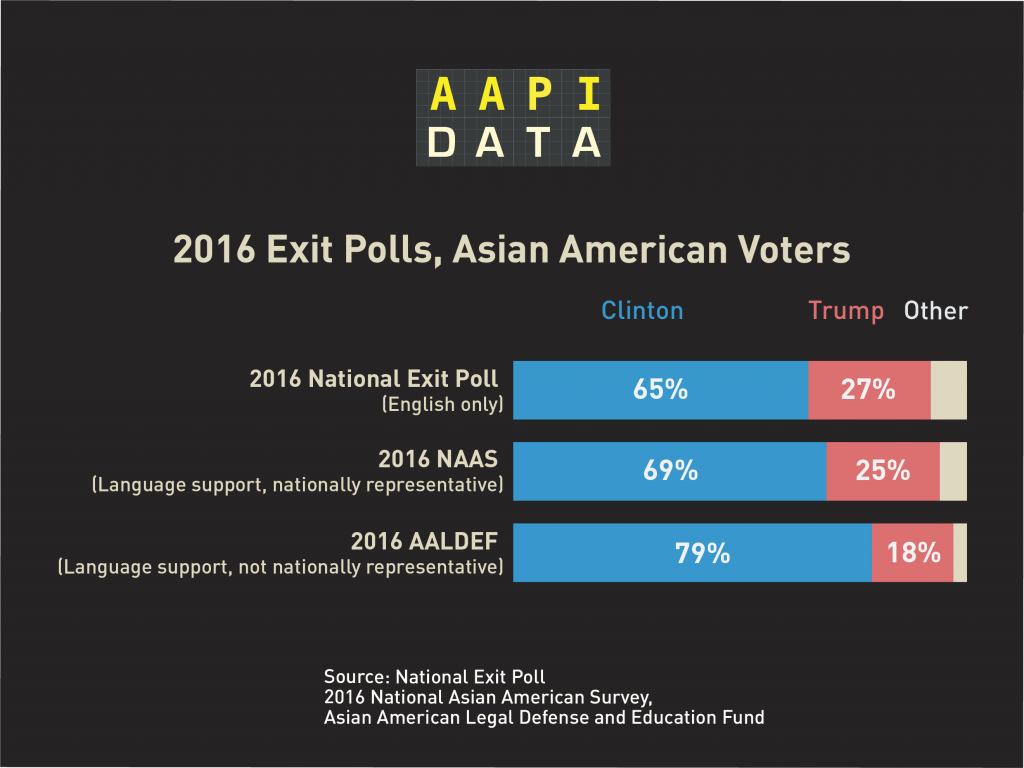 Post-election surveys from 2016 saw three different estimates of the Clinton/Trump margins. The most prominent exit poll is the one conducted by Edison Research for the National Election Pool, which is a consortium of ABC News, the Associated Press, CBS News, CNN, Fox News, and NBC News. In years past, these exit polls have relied heavily on interviews from voters leaving polling stations, combined with telephone interviews of absentee and early voters.

While these polls may be useful in generating overall estimates of national and state voter preferences, several scholars have cast doubt on their representativeness when it comes to communities of color. For example, samples for these exit polls are designed to reflect the geographic spread of the overall electorate but often do not reflect the geographic spread of communities of color. An addition problem for the Asian American community is that these polls are conducted only in English and Spanish. With past surveys indicating upwards of 40% of Asian American voters preferring to be interviewed in an Asian language, and with English-language interviews of Asian Americans tending to have a Democratic bias, it is unlikely that the exit poll numbers on Asian Americans this year will be representative of the population.

So does this mean that the Edison exit polls should be ignored? Not necessarily. The Edison polls have an advantage in that they include data on the four largest racial groups since 1992, allowing for time trend comparisons. Thus, for example, the national exit polls revealed a dramatic shift in Asian American presidential voting since 1992, the biggest recorded for any significant voter group in modern political history, with divergent party stances on immigration and race driving much of that shift. It is unlikely, however, that the Asian American sample was constructed in the same way year-over-year, so even these results across years may not be a strict “apples to apples” comparison. 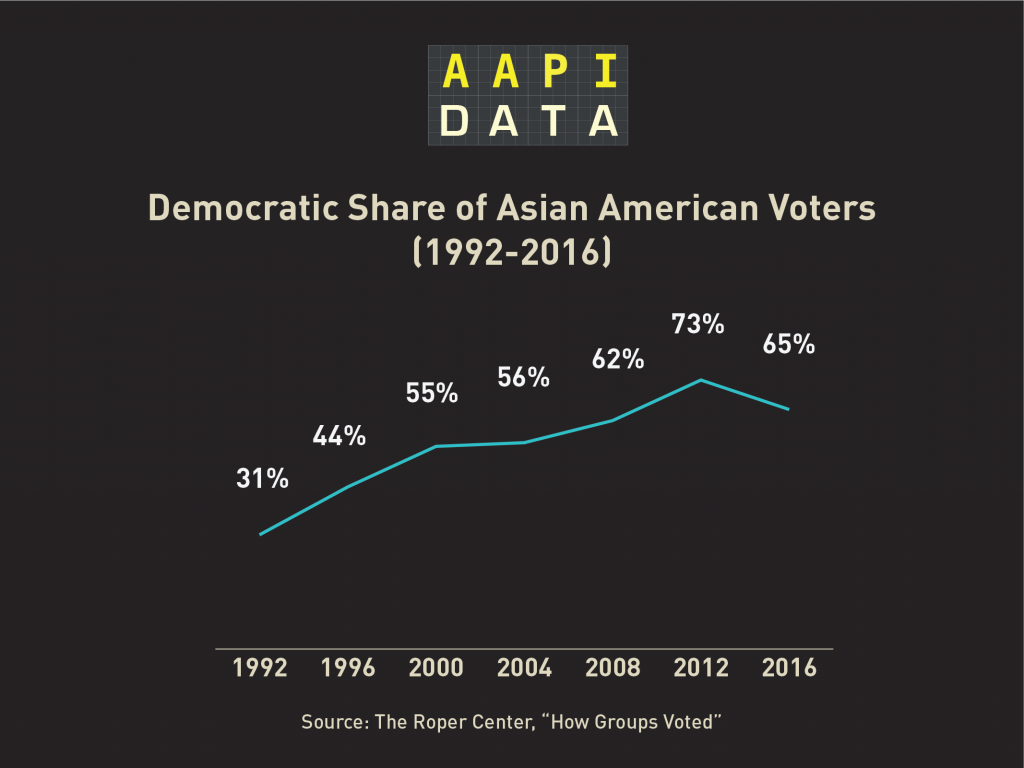 The other two estimates come from AALDEF’s exit poll of Asian American-heavy precincts and the 2016 National Asian American Survey, which was a telephone survey conducted over several weeks after Election Day. The AALDEF poll had nearly 14,000 respondents from 93 poll sites in 55 cities and 14 states. However, as the survey’s methodology explains, “cities and states selected for the exit poll were among those with the largest or fastest-growing
Asian American populations.” While this strategy is helpful in detecting the places where the largest proportion of Asian American voters may be entitled to ballot language assistance, it is also likely to bias the estimate of the Democratic vote upward since places with higher Asian American concentrations tend to be more Democratic. It’s also not clear if the AALDEF estimates are weighted by population or any other dimension. 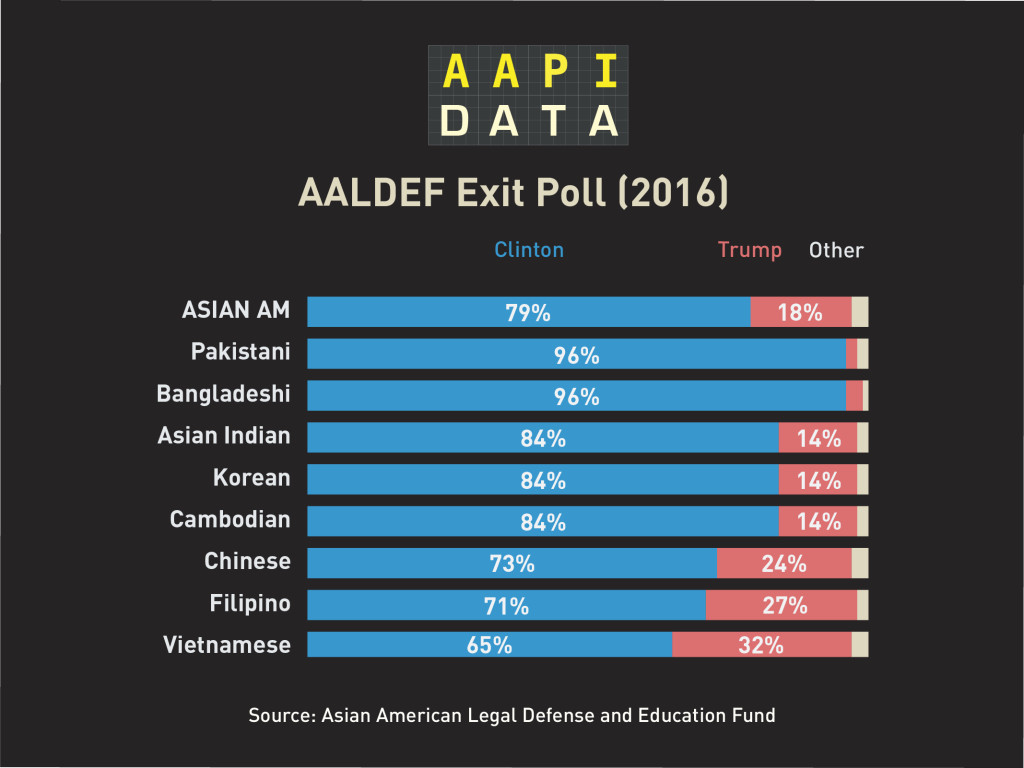 The 2016 National Asian American Survey, by contrast, randomly selects Asian Americans from urban, suburban, and rural areas and in a larger number of states (48 states plus the District of Columbia). And the data are weighted by ethnicity and age, gender, educational attainment, and nativity. Thus, while the AALDEF exit poll found 79% support for Hillary Clinton in 2016, the NAAS estimated Clinton’s support at 69%. Importantly, the 2016 NAAS also found higher support for Clinton among English-language respondents in the survey (74%) than what the National Exit Poll found with respect to their English-language respondents (65%), which is likely due to the fact that the former is designed to be representative of the Asian American citizen population while the latter is designed to be representative of the overall population. 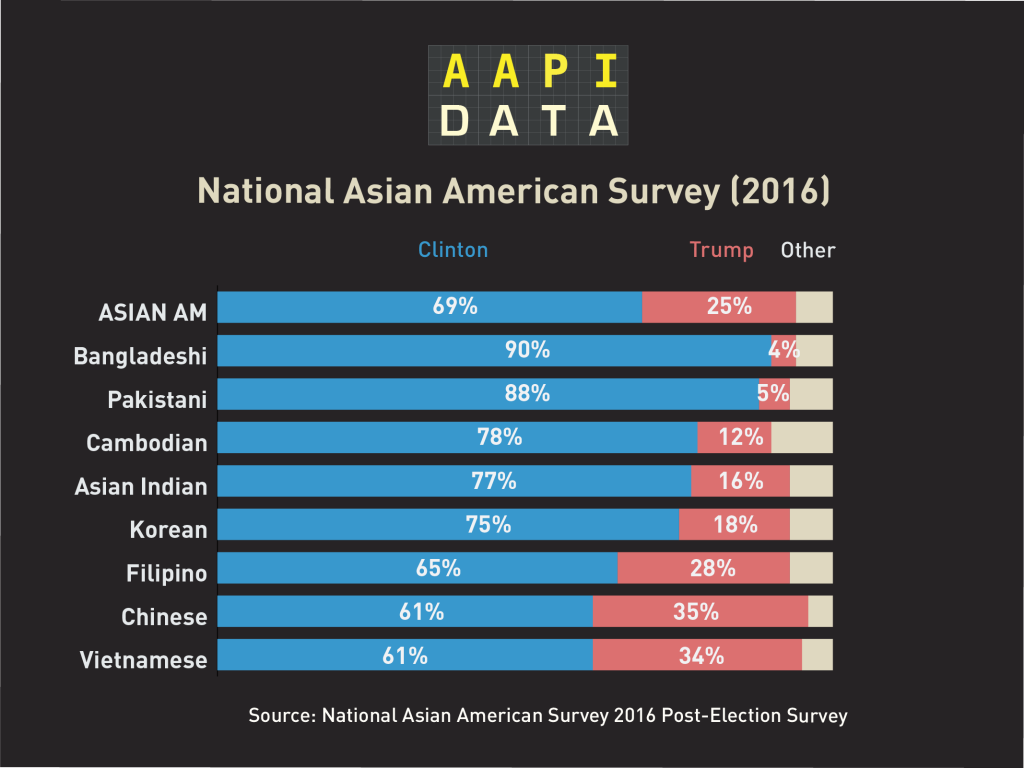 Finally, comparing across detailed origin groups in both of these surveys, we find that the higher Democratic vote estimate in the AALDEF exit poll is greatest for Chinese Americans (12%) and lowest among Vietnamese Americans (4%). Differences in weighting schemes (and the possibility that the AALDEF data are not population-weighted) might also account for the higher average difference (10%) than we might expect based on the population distribution of Chinese, Filipino, Indian Americans and the like. 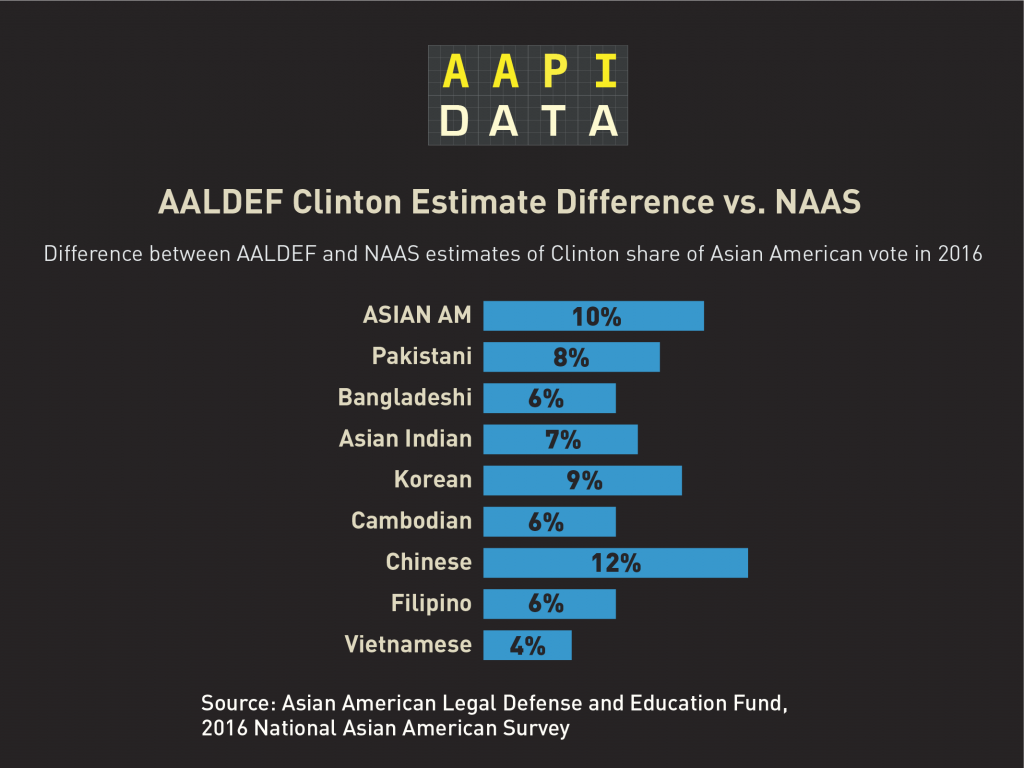 This post will be updated after the election, if/when post-election surveys of Asian Americans are released.