At AAPI Data, we seek to contribute to this conversation on federal data standards by illustrating the importance of AAPI data disaggregation. We do so in a series of blog posts this week focusing on particular outcomes, continuing with income.
[one-third] 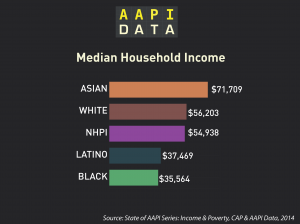 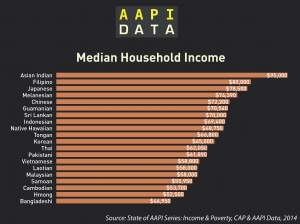 Asian Americans and Pacific Islanders have relatively high levels of household income, data from the ACS show the median household income for both groups higher than the national average, with Asians having the highest of any racial or ethnic group. However, disaggregating the data reveals significant differences across detailed origin groups.

Looking at median weekly earnings we can see the differences among AAPIs extend by gender as well. Interestingly, while AAPI women report the highest median weekly earnings of any racial group, they have the largest gap in earnings with their male counterparts. Vietnamese Americans have the largest gender gap in earnings of any group; and while no racial or ethnic group of female workers achieve parity with males, Filipinos come the closest to achieving gender parity in earnings, with women earning at 96% of the rate of men. 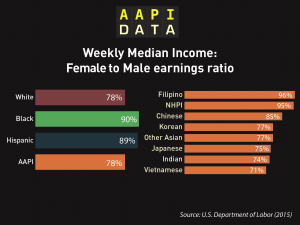 One final note: the analyses above rely on microdata from the American Community Survey that is administered by the U.S. Census Bureau. We believe it is critical for the Census to continue collecting this data, expanding the number of detailed categories, and making the collection of detailed categories standard across federal datasets.  Finally, and perhaps most importantly, this data needs to be more user-friendly and publicly accessible, rather than being hidden under a maze of FactFinder tables or requiring statistical software and knowledge to work with individual-level microsample data.

For those interested in the weekly median earnings estimates, see our table based on the Department of Labor report below.

For those interested in more detail about the differences in AAPI Income, please see our report with Center for American Progress or the latest Department of Labor report on AAPIs.