BY JENNIFER LEE AND KARTHICK RAMAKRISHNAN

The mass shooting in Atlanta that resulted in eight people dead, including six Asian women, put names, faces, and narratives to anti-Asian violence. Their lives exposed the vulnerabilities of race, gender, nativity, age, and class, and their mass murder catapulted the anti-Asian hate onto a national platform.

As we mourn the victims of Atlanta, we continue to be bombarded with news of anti-Asian violence. Recently, a 65 year-old Filipina woman was punched, shoved to the ground, and repeatedly kicked in the head. Adding to the pain was the callousness of the doormen in a midtown Manhattan building who witnessed the assault, and chose to close the door on her as she laid on the ground.

Painful images like these are seared into the nation’s consciousness, and bring much-needed attention to the particular ways that women, immigrants, and the elderly experience harm and violence in American society. It would be a mistake, however, to conclude that anti-Asian violence only affects these groups. Findings based on a new survey by AAPI Data and Survey Monkey conducted immediately after the shooting in Atlanta reveal that Asian American men are as likely as women to report experiencing hate incidents since the onset of COVID-19, and that these incidents are higher among young adults and U.S.-born Asians.

Moreover, hate incidents against Asian Americans are far more widespread than previous estimates suggest. Upwards of 2 million Asian American adults have experienced a hate crime, discrimination, or harassment since the wake of the coronavirus pandemic.

Beyond the Tip of the Iceberg

As fears about the coronavirus increased in early 2020, Asian Americans—especially Asian American women—began to sound the alarm about a rise in anti-Asian violence. In the absence of government intervention, Asian American and Pacific Islander civil rights groups created Stop AAPI Hate, a website where victims can safely report hate incidents in English or in multiple Asian languages, and receive resources often unavailable from local authorities. Within the first 24 hours of the website’s launch in March of last year, more than 40 incidents were reported. To date, there are nearly 4,000, two-thirds from women.

Hate crimes recorded by the NYPD shows a dramatic uptick since 2019 when they recorded only 3 against Asians. In 2020, the number jumped nearly tenfold to 28, and in the first quarter of 2021, 35 hate crimes against Asians are being investigated or have been solved. Cities across the nation, including Los Angeles, Seattle, Boston, San Jose, and Dallas, show similar spikes.

But accounts of self-reports and recorded incidents fail to capture the full scale of anti-Asian hate incidents because those who chose to file a report represent only a thin slice of all individuals who experience hate incidents. They have identified, defined, and processed the incident as motivated by hate, and then calculated that it is serious enough to warrant reporting it as such. By contrast, those who do not file a report—either to a community hotline or with law enforcement—may not have perceived the incident as motivated by hate or may not believe the incident is serious enough to file a report.

There are other reasons for reluctance in reporting hate incidents to local authorities, akin to reasons that many victims of domestic violence do not report incidents: fear of retaliation; a lack of confidence that justice will be served by local authorities and courts; and the concern about bringing undue attention to themselves and their families. Estimates show, for example, that about 25% of women have been victims of domestic violence, yet only between 2.5% and 15% who have been victimized report it.

What is missing from reported incidents, therefore, are the majority of cases that comprise the mass beneath the tip of the iceberg that go unreported, unseen, and unheard.

The Scope and Patterns of Anti-Asian Hate

By surveying a wide swath of the US Asian population, we remove the biases of self-selection in reporting, thereby allowing us to better assess the scope and patterns of anti-Asian hate incidents. Below, we note five.

Findings from the survey suggest that upwards of 2 million Asian American adults have experienced anti-Asian hate incidents since the onset of COVID-19: 1 in 8 Asian American adults in 2020; and 1 in 10 in the first quarter of 2021. These figures indicate just how much more widespread incidents of hate crimes, discrimination, and harassment are than previously estimated based on self-reported data alone.

Contrary to the prevailing narrative that Asian American women are more likely to experience hate incidents than men, the survey data show no significant gender differences in reported experiences. In fact, men are slightly more likely than women to report having experienced an anti-Asian hate incident than women overall (31% vs 25%, respectively), and so far in 2021 (12% vs. 8%). 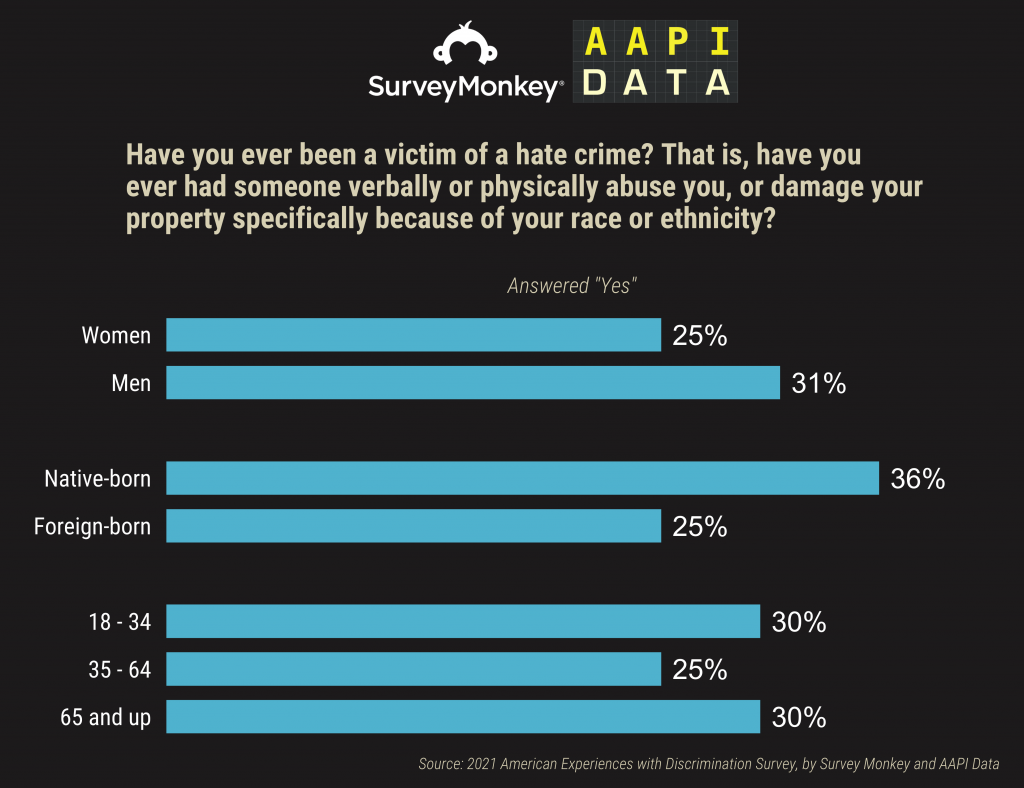 Asian American women are, however, more likely to cite both gender and race as the motivations behind the hate incidents they experience. Moreover, their intersecting vulnerability may explain why they are significantly more likely to worry about experiencing hate crimes, harassment, and discrimination than men: 74% versus 64%. Also concerning is the finding that Asian American women would feel less comfortable than men in reporting a hate crime to law enforcement authorities. Thus, even as Asian American women may feel comfortable reporting hate incidents to community hotlines, as the Stop AAPI Hate data so far indicate, the same is not true with respect to reporting to law enforcement.

Despite viral video footage of elderly Asian Americans being the targets of attack, young adults between the ages of 18 and 34 are the most likely to report having experienced anti-Asian hate incidents. These patterns may reflect an increased likelihood of experiencing a hate incident, with younger adults less likely to shelter in place during the pandemic than their elderly and middle-aged counterparts. But these differences may also reflect differences in perception about what constitutes a hate crime, harassment, or discrimination. Importantly, older Asian Americans would feel much more comfortable than younger Asian Americans in reporting hate crimes to law enforcement authorities. 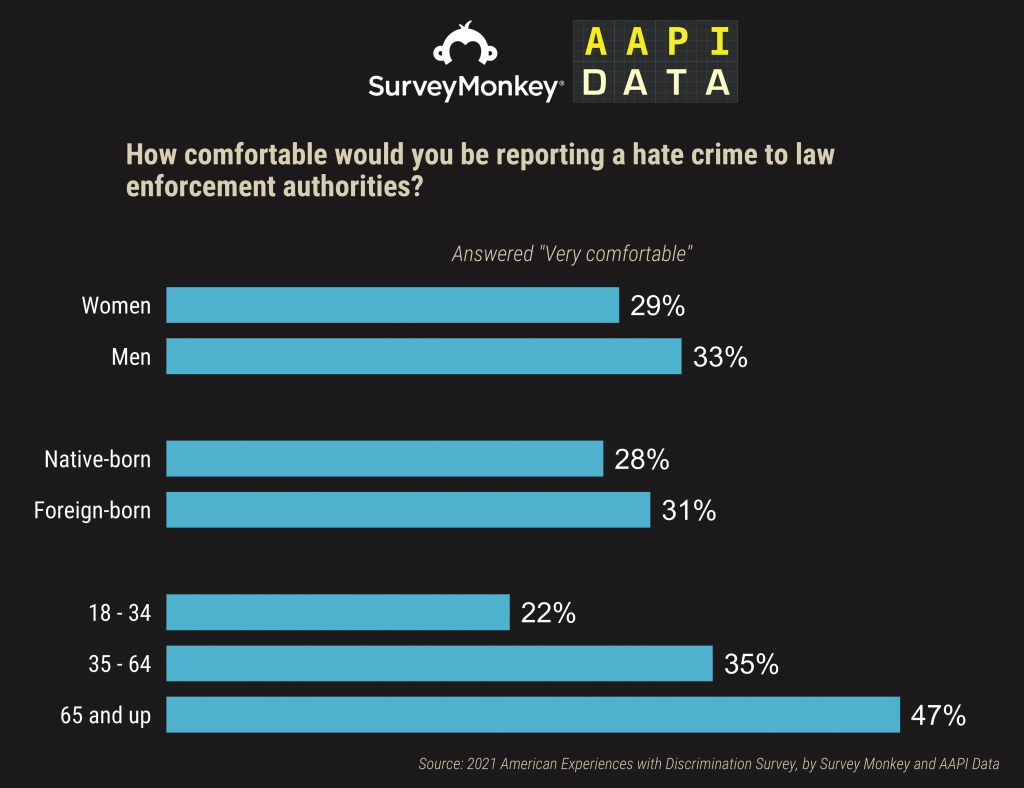 U.S.-born Asians, regardless of gender, are more likely to report experiencing and worrying about experiencing anti-Asian incidents than Asian immigrants. Here, we note the possibility that differences in perception may be key. U.S.-born and younger Asian Americans are more attuned to identifying, defining, and processing incidents as motivated by racism, misogyny, and xenophobia. Interestingly, however, native-born Asian Americans are slightly less comfortable reporting these incidents to law enforcement authorities when compared their immigrant parents and grandparents. 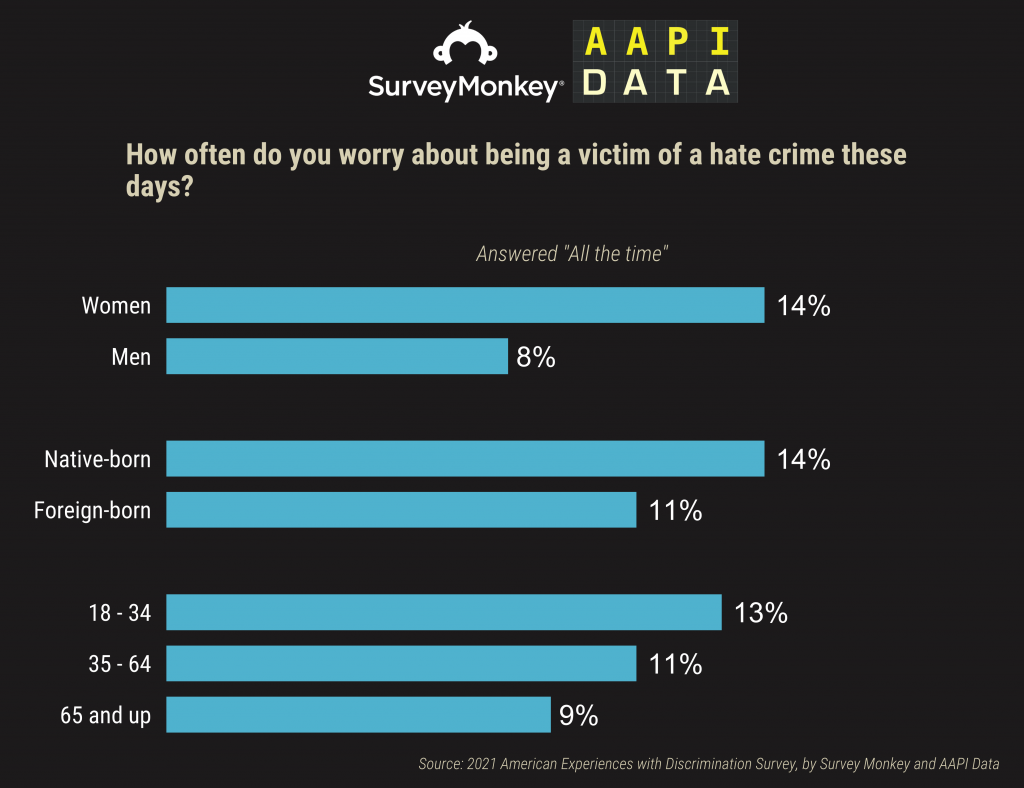 Asian Americans are less comfortable than other groups to report a hate crime. Nearly two-thirds (62%) of Asians worry about being attacked again, and 63% worry about bringing unwanted attention to them or their family (with 16% and 21%, respectively, expressing strong concerns about each). The fear of reporting hate incidents to local authorities underscores why on-line websites like Stop AAPI Hate are critical to the Asian American community, and to victims of anti-Asian violence, harassment, and hate in particular. 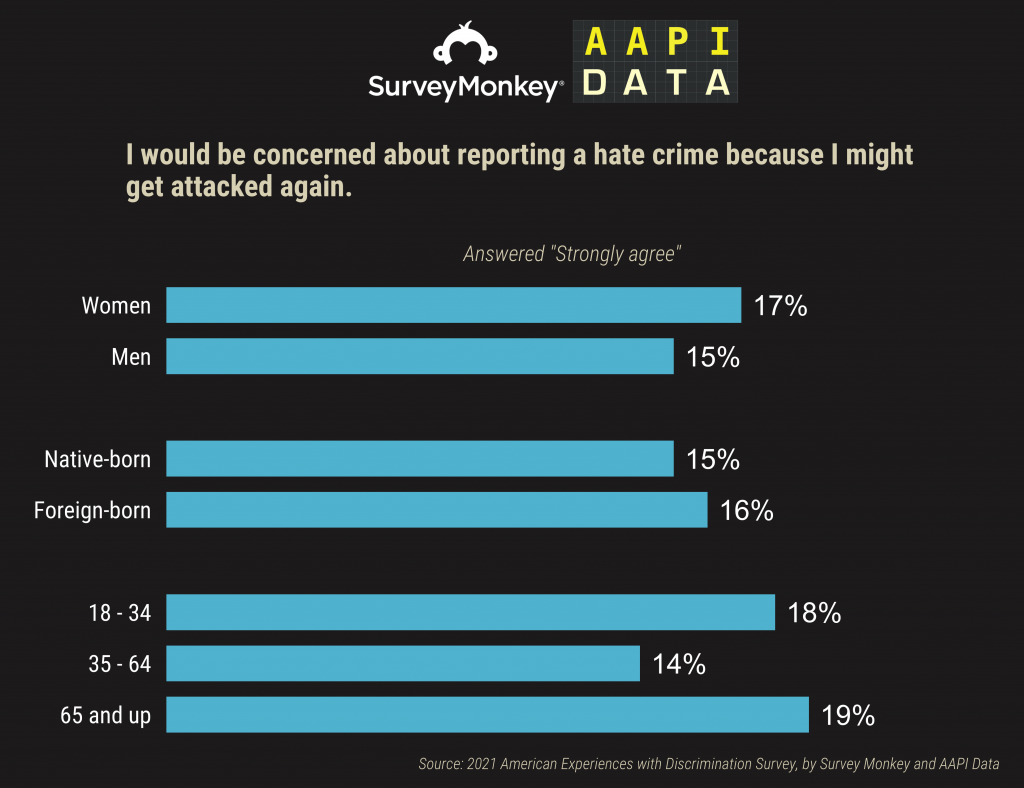 The mass shooting in Atlanta and viral video footage of eldery Asian Americans being physically assaulted have generated an outpour of outrage, empathy, and cries to Stop Asian Hate. They also seared in our consciousness that seniors, immigrants, and women are the most likely to experience anti-Asian hate incidents. But new survey data point to a counter narrative: younger Asian American adults, U.S. born Asians, and men as likely—indeed, slightly more likely—to report having experienced an anti-Asian hate incident than older Asians, immigrants, and women. Whether these findings reflect differences in experiences or differences in perceptions of those experiences is beyond the scope of the survey.

When the outrage over the mass murder in Atlanta fades, and empathy for elderly victims of anti-Asian hate subsides, let’s not lull ourselves into believing that anti-Asian violence, misogyny, and racism has abated.