As the 2018 midterm elections draw nearer, we provide a closer look at competitive congressional races where Asian Americans and Pacific Islanders (AAPIs) could make a critical difference in determining the winner. While every vote counts, including in runaway contests where high vote shares can help establish perceptions of a popular mandate for the winning party, most media coverage and campaign investments tend to focus on competitive races, and on constituent groups in those races that can tip the balance in favor of one party over another.

So where can Asian American and Pacific Islander voters have maximum impact in 2018? To answer that question, we use the Cook Political Report rankings of House races, and focus on districts where AAPIs represent at least 5 percent of eligible voters—adult U.S. citizens, often referred to as the Citizen Voting Age Population, or CVAP).

Using the Cook House ratings of battleground districts as of September 12, 2018 (“toss-up” districts or those that “likely” or “lean” Republican or Democrat), we focus on races where AAPIs make up at least 5 percent of eligible voters. This gives us a total of 27 congressional districts spanning 11 states, including in places where AAPIs are a fast-growing segment of the population. 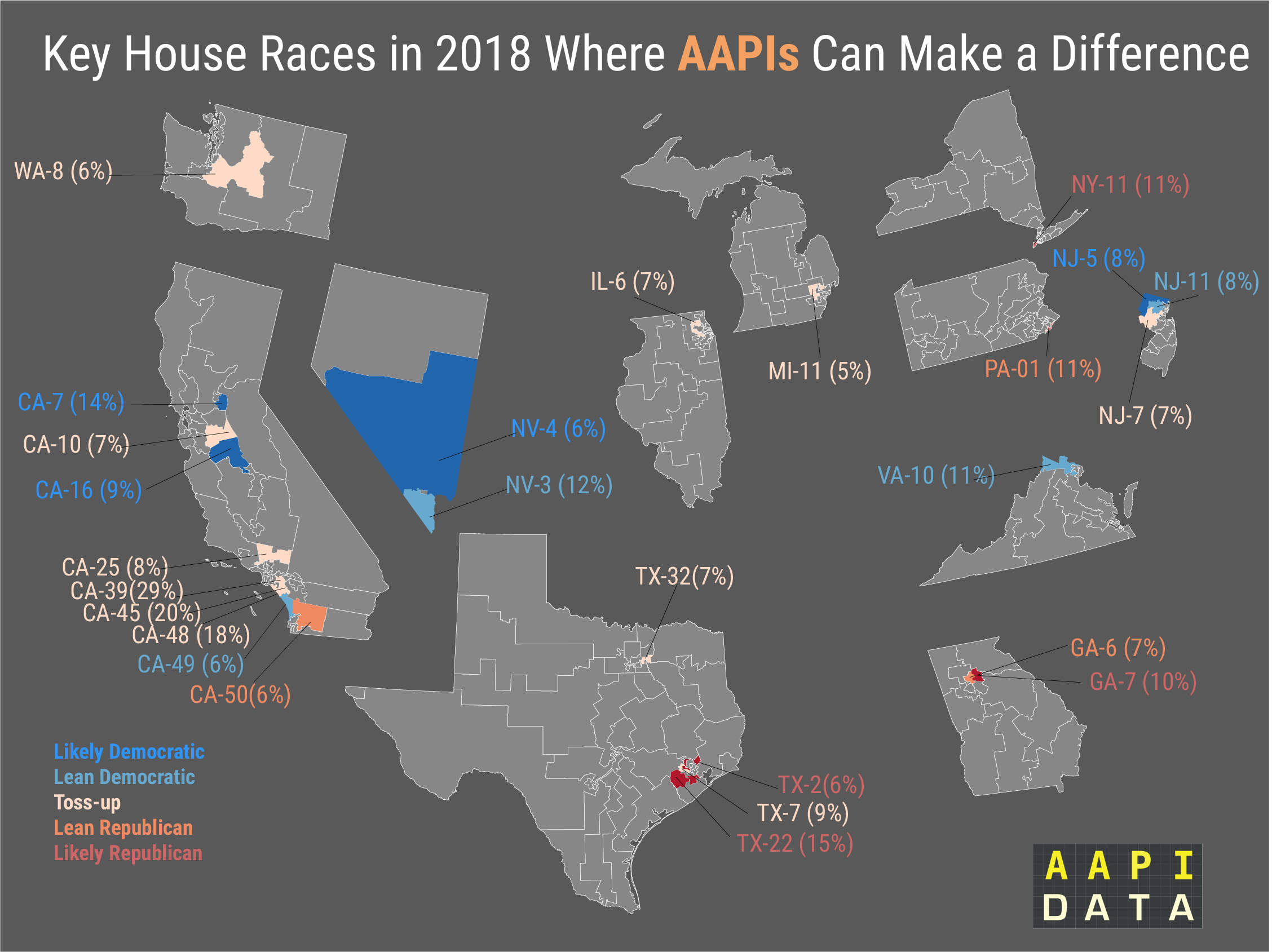 One of the first things to note is the sheer number of “toss-up” seats with significant AAPI eligible voters in 2018 (11 in total). The Cook Political Report marks “tossup” seats as the most competitive, where “either party has a good chance of winning.”

In California, where the AAPI population is the largest in the country, there are 9 races where AAPIs make up a significant portion of the electorate and 5 are rated as toss-up seats currently held by Republicans (as of 09/12/18). In California’s 39thdistrict, Republican State Assembly Member Young Kim is facing Democrat and Navy veteran Gil Cisneros in a close race for the open seat where AAPIs make up 29% percent of the district’s electorate. In CA-45, incumbent Mimi Walters (R), is in a close race with Law Katie Porter (D) a law professor at UC Irvine, where 1 in 5 eligible voters is AAPI. In the nearby 48thdistrict, incumbent Dana Rohrabacher (R), faces Harley Rouda (D) a businessman and attorney where 18% of the electorate is AAPI. 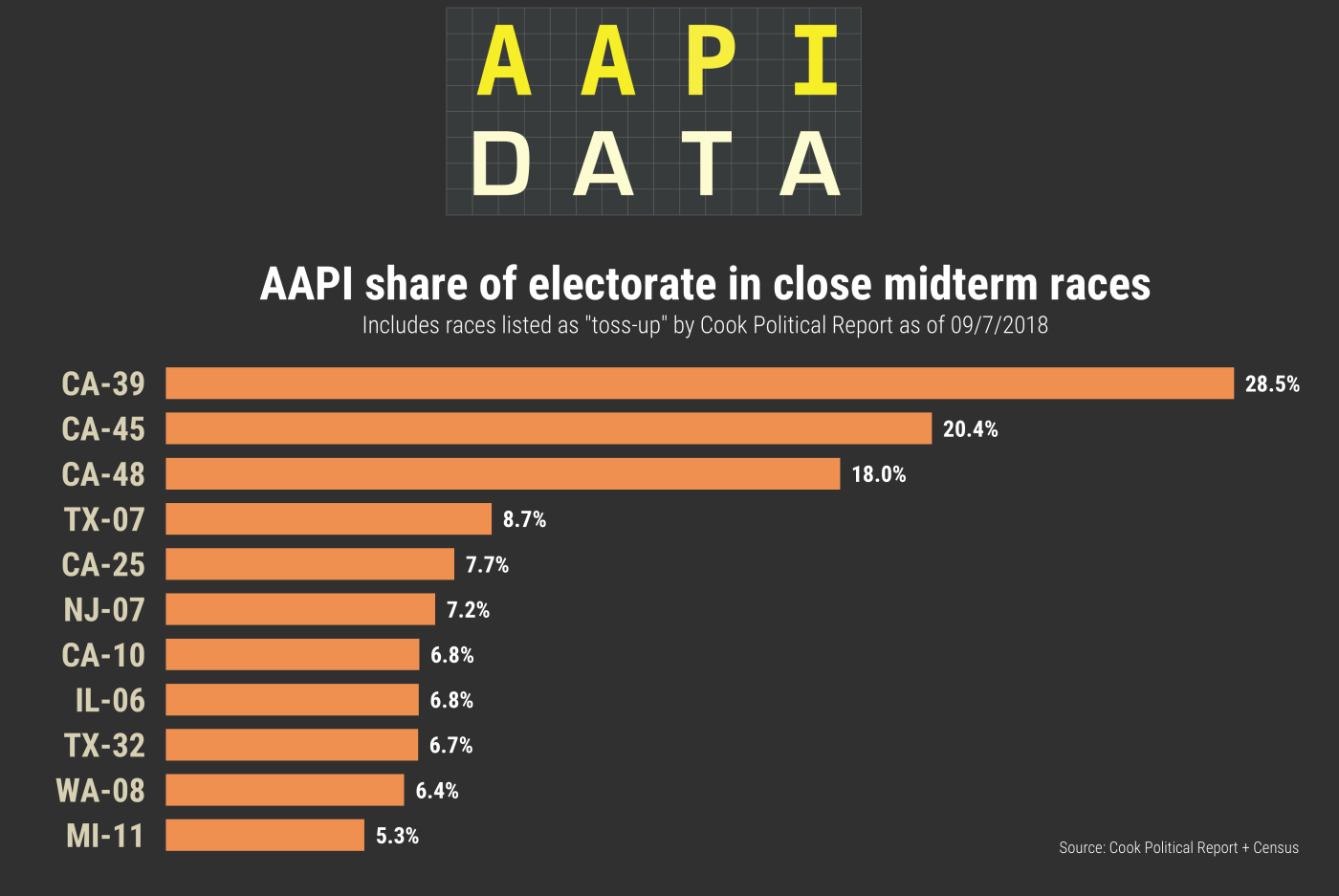 California is not the only state with toss-up districts and significant AAPI populations. In Texas, for example, AAPI voters could play a significant role in TX-07 where incumbent John Culberson (R), is in a close race against attorney Lizzie Pannill Fletcher (D), where AAPIs make up 9% of the electorate. Finally, AAPIs also represent between 5% to 8%  of the electorate for competitive races in New Jersey (NJ-7), Illinois (IL-06), Washington (WA-08), and Michigan (MI-11).

In addition to “toss-up” districts, the Cook Political Report identifies “leaning” districts that are considered “competitive races, but one party has an advantage.” AAPIs represent more at least 5% of the district electorate in 7 races across as 6 states. In Nevada’s 3rd district, Susie Lee (D) is slightly favored to win the open seat over Danny Tarkanian (R) where AAPIs make up 12% of the electorate. On the east coast, key open seat races in VA-10 and NJ-11th are rated as “lean Democratic” with AAPIs in both districts representing at least 8% of the electorate.

Finally, the Cook Political Report also identifies “likely” districts that are “not considered competitive at this point, but have the potential to become engaged.” Among the 9 safe or “likely” races, AAPIs comprise the largest share of the electorate (15%) in TX-22, where incumbent Pete Olson (R), is favored over Sri Kulkarni (D). Similarly AAPIs make up 14% of the electorate in CA-7, where incumbent Ami Bera (D) is expected to win reelection easily over business executive Andrew Grant (R). AAPIs also represent a significant share of eligible voters in two other likely Democratic races: CA-16 (9%), NJ-5 (8%) & NV-4 (6%). Among likely Republican races, AAPis make up 6% of the electorate in TX-2, 8% in TX-24, more than 10% in GA-7, and over 11% in NY-11.