BY KARTHICK RAMAKRISHNAN AND SARA SADHWANI

The 2020 presidential election saw an unprecedented level of attention to the Asian American vote, from presidential battleground states like Georgia to competitive Congressional districts in Southern California. There have been a plethora of surveys, polls, and studies of the Asian American vote; here. We are pleased to present a media/consumers guide to these various studies, including any notes about interpretations based on the scope limitations of each study.

Estimates of turnout among Asian Americans are still preliminary, and overall they indicate significant increases in votes cast and record-high levels of voter turnout. Typically, the “final word” on turnout occurs around June following each presidential election, as the Current Population Survey releases the results of its November voter supplement and states have released all of their individual voter records. Nevertheless, we have several indications that Asian Americans had record voter turnout in 2020, based on preliminary estimates from national data firms and analysis of early voting data in several states.

For example, preliminary estimates from the voter data firm Catalist—based on available returns from 33 states representing two-third of the Asian American eligible voters nationally[1]—find that the Asian American turnout rate among the adult citizen population in 2020 was 58%, which is an increase over the firm’s similar estimate of 51% in 2016. This 7-point gain, a nearly 14 percent proportional increase over the 51% baseline, is the highest recorded for any racial group in the firm’s analysis so far.

For those interested in what this might indicate for the CPS voter turnout data to be released later this year, the 2016 estimate of self-reported turnout for Asian Americans was 49%. Notably, the CPS data have one advantage in that the race/ethnicity data are self-reported, while the voter file analyses by Catalist and others are based on probabilistic models of race and ethnicity based on surnames and geographic concentration. On the other hand, voter file analyses are based on actual vote records rather than self-reported information on voting in the Current Population Survey, which tend to be less reliable. 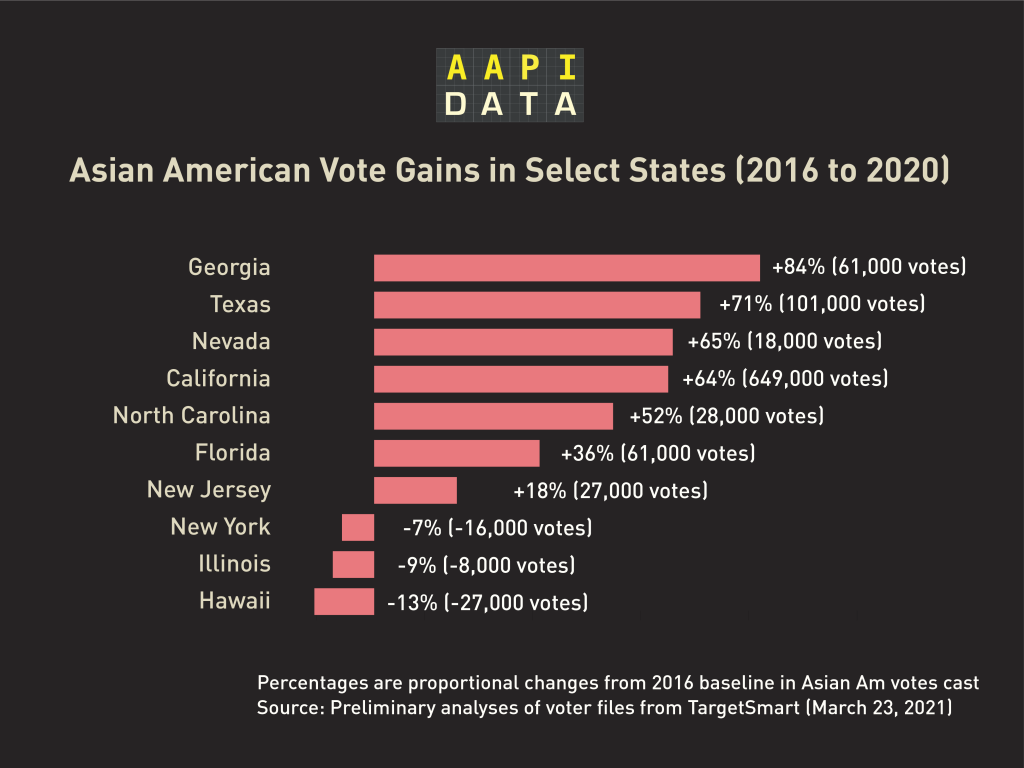 What do the various surveys tell us about presidential vote choice? Here, we summarize findings from pre-election surveys, election eve surveys, and the national exit poll. Each has its strengths and limitations. According to the 2020 Asian American Voter Survey (AAVS) a pre-election survey conducted in September 2020 by AAPIData in partnership with Asian Americans Advancing Justice and APIAVote, 54% of all Asian Americans were in support of Joe Biden for president. This includes support from large majorities of Indian Americans (65%), Japanese Americans (61%), Korean Americans (57%), Chinese Americans (56%), and Filipinos (52%). According to the survey, 30% of Asian American supported Donald Trump, including 48% of Vietnamese Americans, while 15% of respondents were undecided. Assuming that the undecided broke in the same ratio as those who had decided, we would have expected to see 64% support for Biden and 35% support for Trump. 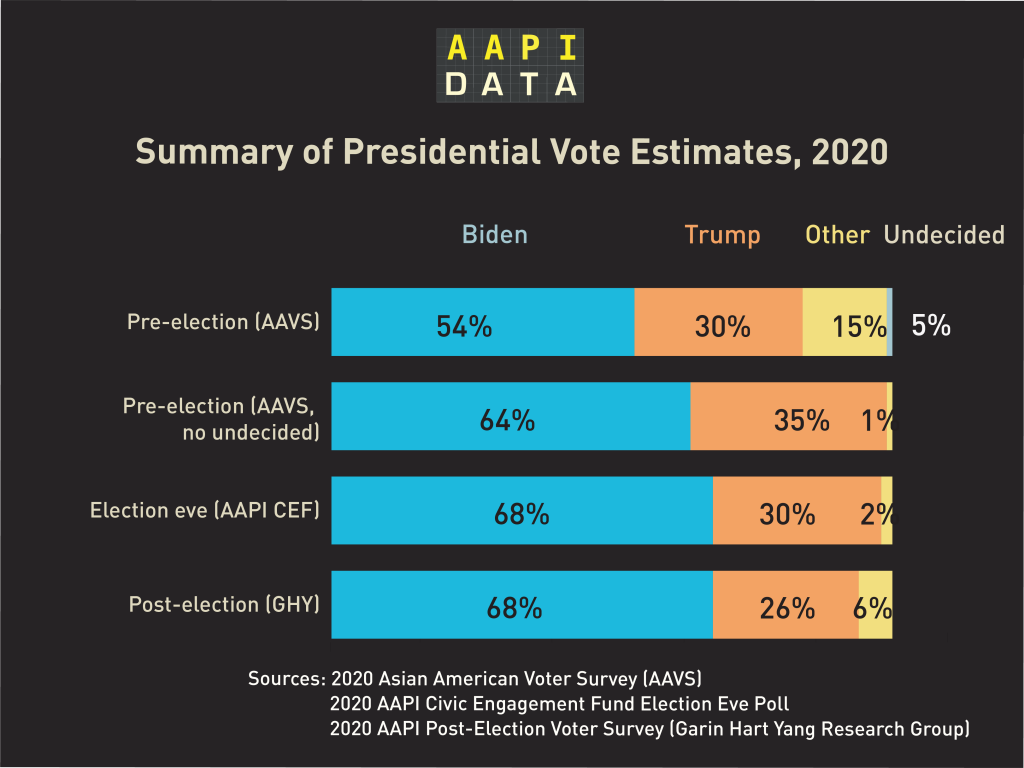 As the election drew closer, support for Biden grew across all national origin subgroups. The AAPI Civic Engagement Fund’s election eve survey, fielded from October 28 to November 2, 2020, included over 1,700 AAPI voters contacted both online and by telephone. 68% of all Asians said they supported Biden, including 72% of Chinese Americans, 60% of Filipinos, 70% of Indian Americans, 70% of Japanese Americans, and 71% of Korean Americans. Notably, the survey found that 61% of Vietnamese Americans indicated support for Biden; this number is significantly higher than the estimate produced by AAPI Data, and varies from the precinct-level estimates of a strong Vietnamese American vote shift to Trump from the New York Times.

A post-election online survey conducted November 3 to 9, 2020 for the National Education Association (NEA) by Garin Hart Yang Research Group mirrored the results of the prior surveys: 68% of AAPIs supported Biden, while 26% supported Trump (8% supported a third party candidate or declined to state). This includes strong support for Biden amongst AAPIs (63%) in battleground states.

Is there such a thing as an Asian American agenda? One of the perennial questions about Asian American voters is whether there. On the one hand, there is tremendous diversity within the community with respect to outcomes that range from educational attainment and poverty, to language access, health care and health outcomes.

On the other hand, research from surveys as wide-ranging as the 2008, 2012, and 2016 National Asian American Survey, the 2012 Pew Survey, and various surveys from 2014 to 2020 by AAPI Data and others by Asian American Decisions have all shown a remarkable level of convergence in public opinion that is generally progressive. Thus, for example, Asian Americans are strongly supportive of gun control, universal health care, progressive taxation, and environmental protection. The only issues where we have seen some divergence by Asian ethnicity is on affirmative action (with Chinese Americans generally more conservative), and on issues like LGBT rights and reproductive rights where religious affiliation produces divergence in opinion.

The various 2020 surveys showed consistency in these results, with progressive support across ethnic groups on a variety of issues. For example, the 2020 Asian American Voter Survey found consistently progressive opinion on a range of issues, from immigration (59% favoring a pathway to citizenship) and racial justice (63% favoring government doing more to ensure equal rights for Blacks), to gun control (81% in favor of stricter gun laws) and environmental protection (77% in favor of stricter emission limits). 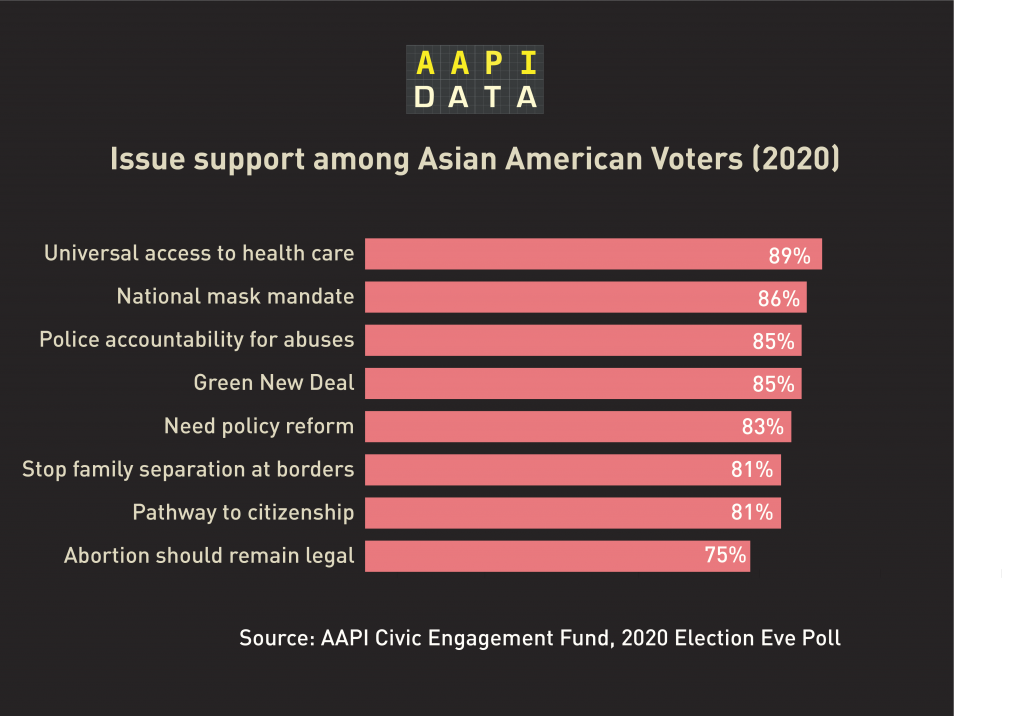 The 2020 election-eve survey by the AAPI Civic Engagement Fund found an even stronger consensus across groups with respect to support for issues such as universal health care (89%), the Green New Deal (85%), stopping family separation at the border (81%), and supporting a pathway to citizenship (81%). Finally, the post-election survey by Garin Hart Yang Research Group found that Biden had a very strong advantage over Trump (greater than 40 points) on the following issues: racial profiling (+45 points), college affordability (+44), national security (+41), immigration (+40), and jobs/economy (+40).

Karthick Ramakrishnan (@karthickr) is founding director of AAPI Data and a professor of public policy at UC Riverside. Sara Sadhwani (@sarasadhwani) is an assistant professor of politics at Pomona College and senior researcher at AAPI Data.