The 2020 presidential election saw a major increase in voter engagement among Asian Americans and Pacific Islanders, building on record gains in voting in the 2018 midterm elections, where midterm voter registration and turnout jumped across every segment of the AAPI community, including by nativity, age, gender, and geography.

2020 saw even more remarkable gains, according to data released from the U.S. Current Population Survey. Voter turnout, which we measure as the voting rate among adult citizens, jumped from 49.3% among Asian Americans in 2014 to 59.5% in 2020. That increase was the second-highest for any racial or ethnic group in the country, whether measured in percentage point terms (a 11-point increase), or in proportional terms (a one-fifth increase over a baseline of 49.3).[1] The only group with higher gains in voter turnout was Pacific Islanders, whose voting rates among adult citizens increased from from 41.2% in 2016 to 55.7% in 2020—a 14-point gain in absolute terms, and a one-third increase in proportional terms over the 2016 baseline. These gains in AAPI voter turnout are similar to those found by Catalist in its national analysis of administrative voter data.

There were also significant increases in voter registration and turnout among different segments of the AAPI population, including by ethnicity.[2] In 2020, Indian Americans and Japanese Americans reported the highest rates of voting, at 71% and 66%, respectively, among adult citizens. For Indian Americans, this was a 9 percentage point increase over 2016 while for Japanese Americans, the increase was a modest 4 percent. Korean Americans saw among the biggest increases in voter turnout, from 45% in 2016 to 60% in 2020, while Filipinos saw only modest increases and had the lowest turnout rate among Asian Americans in 2020. 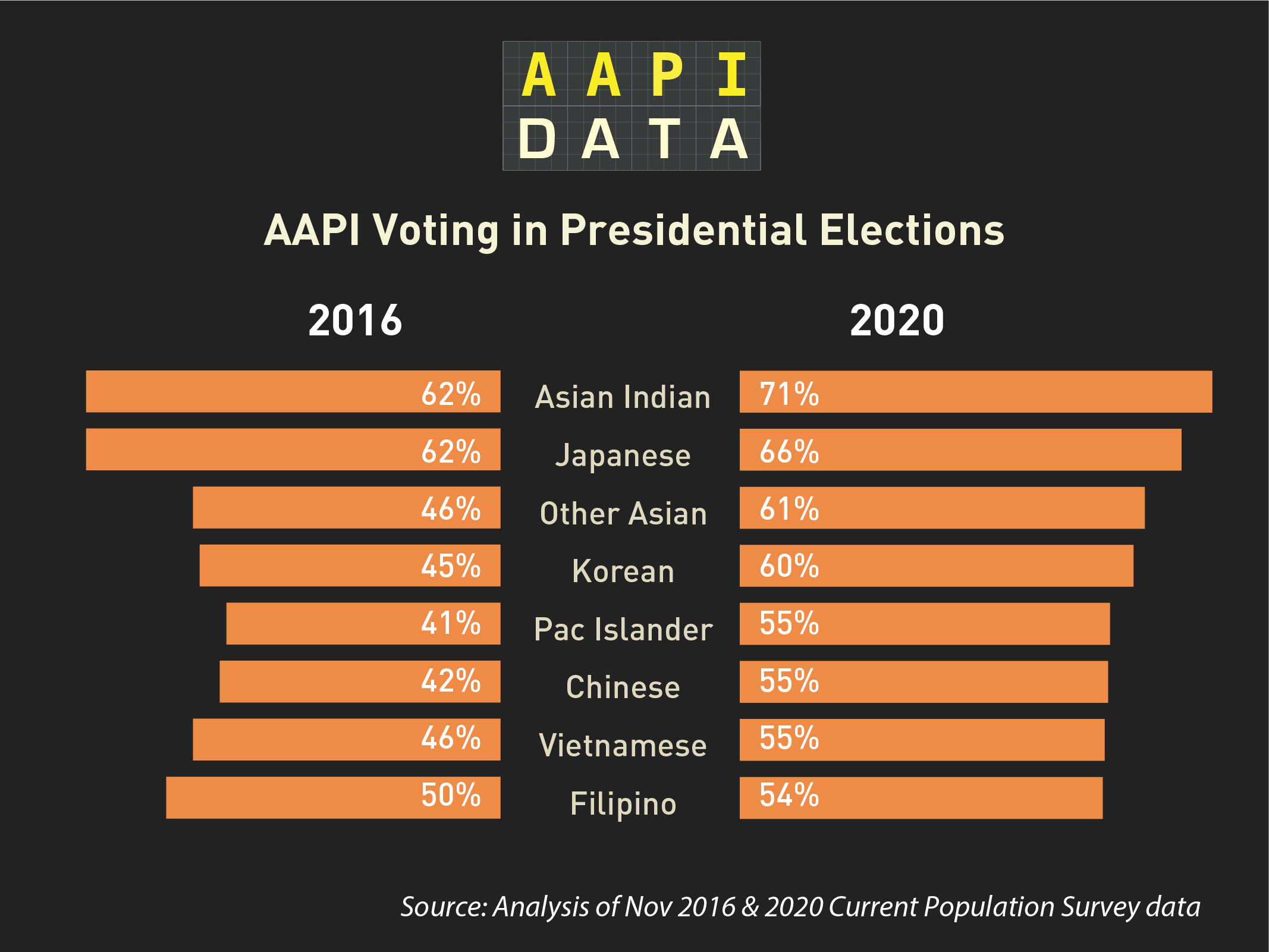 We also found significant increases in voting across lines of gender, nativity, and age. Turnout among AAPI men jumped from 48% in 2016 to 58% among eligible voters in 2020, and from 48% to 61% among AAPI women during the same period (the gender gap in 2020 was not statistically significant at the 95% confidence interval given the sample size).

Voting increases were also dramatic among younger adults, age 18 to 34, whose voting rates jumped from 41% in 2016 to 56% in 2020. This disproportionately high jump among younger voters helped to erase half of the voting gap by age among AAPI voters found in 2016. Voting increased for all other age groups, and the voting rate among 35 to 49 year olds reached parity with those age 50 to 64. Finally, voting among the native born and foreign born increased in a similar manner, from 43% to 54% among U.S.-born Asian Americans and Pacific Islanders, and from 52% to 64% among AAPIs who are naturalized citizens. These nativity patterns in voting are long-standing, and reflect the fact that naturalized citizens tend to be significantly older than U.S.-born AAPIs eligible to vote.