BY STEPHANIE DEMORA AND KARTHICK RAMAKRISHNAN

Andrew Yang has shot to the top of the Asian American money race, while Booker has faded from view. Those are the latest findings from our analysis of campaign contribution data to Democratic Party candidates from the beginning of 2019 through the third quarter.

Recall that, in our first-quarter analysis of campaign contributions from Asian Americans, Cory Booker was winning the Asian American money race, just ahead of Tulsi Gabbard and Kamala Harris. Andrew Yang was far behind, in fifth place, which might have been a reflection of his relatively low name recognition, concerns about his electability, or other factors.

These donation patterns changed significantly, however, in the second quarter of 2019 after Joe Biden entered the race. Kamala Harris took the lead position, with an estimated $607,000 in contributions from Asian Americans, while Biden received about $511,000. Mayor Pete Buttigieg was not far behind, at $468,000. Andrew Yang’s contributions from Asian American donors more than doubled since the first quarter of 2019, but he still remained in fourth place at about $408,000. 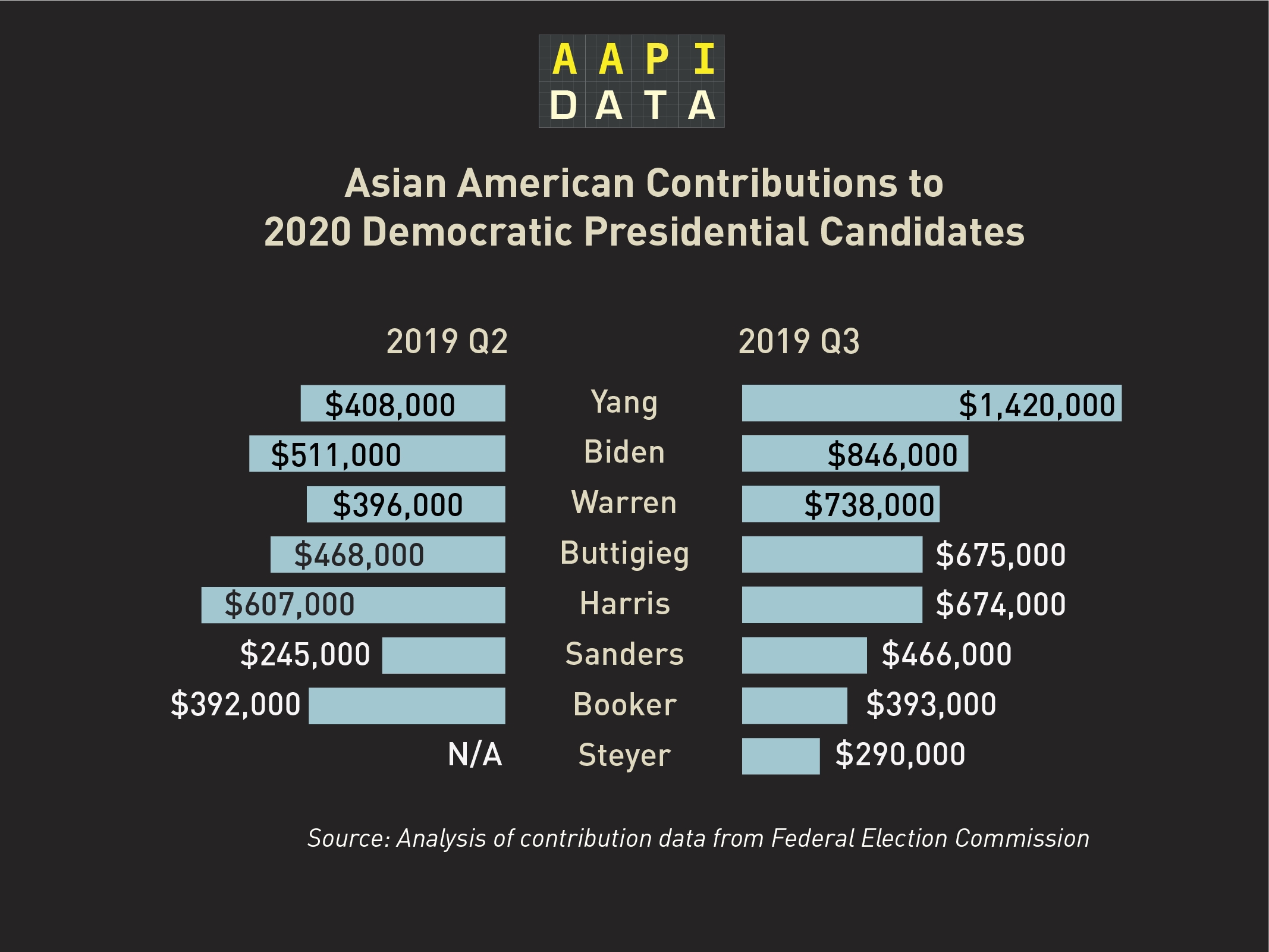 Yang’s fortunes changed dramatically, however, in the third quarter of 2019 as shot to the top of the Asian American money race, with over $1.4 million in campaign contributions. Biden remained in second place, although his contributions increased from $511,000 to about $846,000, while Elizabeth Warren jumped from fifth place to third, with an estimated $738,000 in contributions from Asian American donors (see table for rankings and precise dollar amounts below). Finally, Mayor Pete Buttigieg and Kamala Harris were in a virtual tie for fourth place among Asian American donors in the third quarter of 2019.

Looking ahead, we can expect Andrew Yang to continue outperforming the other Democratic candidates among Asian American donors. Even though Yang has faced some criticism among Asian American community activists for his jokes and stereotypical statements, he has also made it a priority to attend events such as the 2019 AAPI Presidential Forum (along with Tulsi Gabbard and Tom Steyer) and draws significant support from younger Asian Americans at his rallies.

At the same time, we can also expect Joe Biden to remain competitive among Asian American donors with the recent launch of his AAPIs for Biden network. And with Harris dropping out of the presidential race in December 2019, and California’s early primary looming with a significant share of Asian American voters and donors, we can Asian American political contributions to increase among Warren, Buttigieg, Sanders, and more.

Notes about our research:

Our analysis is based on itemized individual contribution data as reported to the Federal Election Commission, where reporting is required when they exceed $200. We used ethnic surname analysis to impute the race of each contributor by their surname and data on surnames by race by the Census. These results vary slightly from Sono Shah’s analysis of Q1 data, which also included geographic concentrations of Asian Americans to produce more precise estimates of Asian American campaign contributions.

Stephanie DeMora is a Ph.D. student in political science at UC Riverside and researcher at the Center for Social Innovation.

Karthick Ramakrishnan is professor of public policy at UC Riverside and director of AAPI Data and the Center for Social Innovation.