Update 04/22/2019: For more information about how Sono did this analysis please see this post.

Analysis of first quarter FEC filings reveal that Cory Booker has raised the most amount of money from Asian donors. 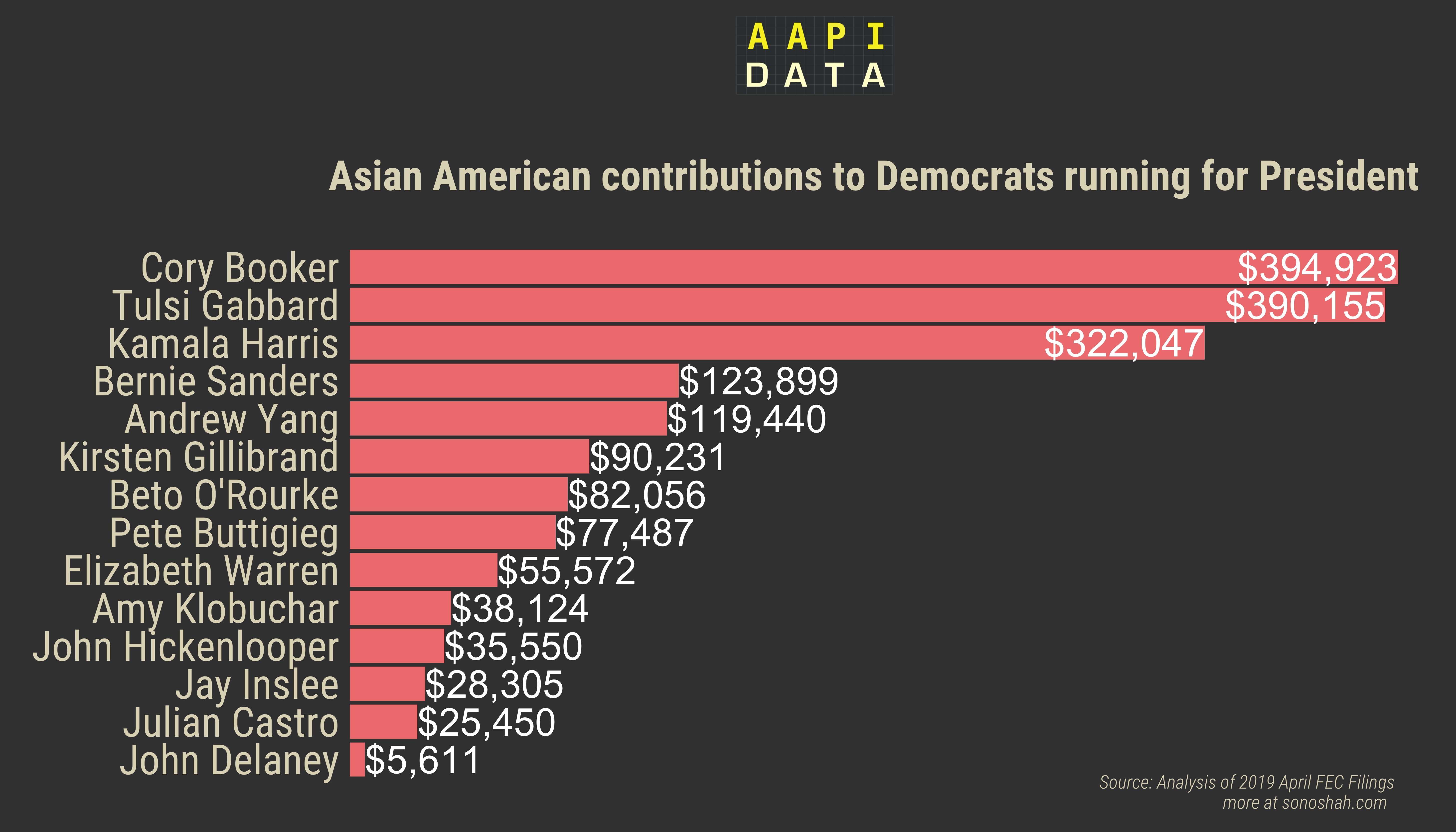 While we wait for the polling data to roll in, I took a closer look at another form of political participation that allows insight into Asian Americans, campaign contributions. Following the release of the April quarterly FEC filings there has been a flurry of stories discussing who leads the fundraising race among Democrats vying for the Democratic nomination in 2020.1https://projects.fivethirtyeight.com/2020-fundraising/, https://www.politico.com/2020-election/president/democratic-primary/candidates/fundraising-and-campaign-finance-tracker/, https://www.nytimes.com/interactive/2019/us/politics/campaign-finance-2020-fundraising.html, https://www.nytimes.com/2019/04/16/us/politics/democrats-2020-fundraising.html These filings offer an early look at the overall levels of enthusiasm for each candidate, but we can also leverage this data to look at specific donor groups. To do this, I analyzed the April 2019 Quarterly FEC filings for the following candidates (Cory Booker, Tulsi Gabbard, Kamala Harris, Bernie Sanders, Andrew Yang, Kirsten Gillibrand, Beto O’Rourke, Pete Buttigieg, Elizabeth Warren, Amy Klobuchar, John Hickenlooper, Jay Inslee, Julian Castro, John Delaney).

What did I find?

Asian donors made 4,057 contributions totaling $1,788,850 dollars to the 14 major Democratic Presidential candidates. Here are some takeaways:

Despite the fact that there are two Asian American candidates competing for the nomination, Cory Booker has raised the most money from Asian donors so far with Tulsi Gabbard and Kamala Harris close behind. The large amounts raised by Booker are somewhat surprising given the presence of Harris and Yang, though NJ has a large Asian American population. Notably, while Asian contributions from California represent the largest share of any state for most candidates, Booker has raised the bulk of his Asian contributions from New Jersey and neighboring New York (See table below).

Looking closer at the composition of each candidate’s donor network, Gabbard and Yang both stand out due to the large proportion of Asian contributions (44% and 35% respectively) in their individual contributions. Looking geographically, we can see that more than 1/3 (34%) of all Asian contributions have come from California. Finally, when combined with New York and New Jersey, donors in these three states account for more than 60% of the contributions Asians made during this time period. 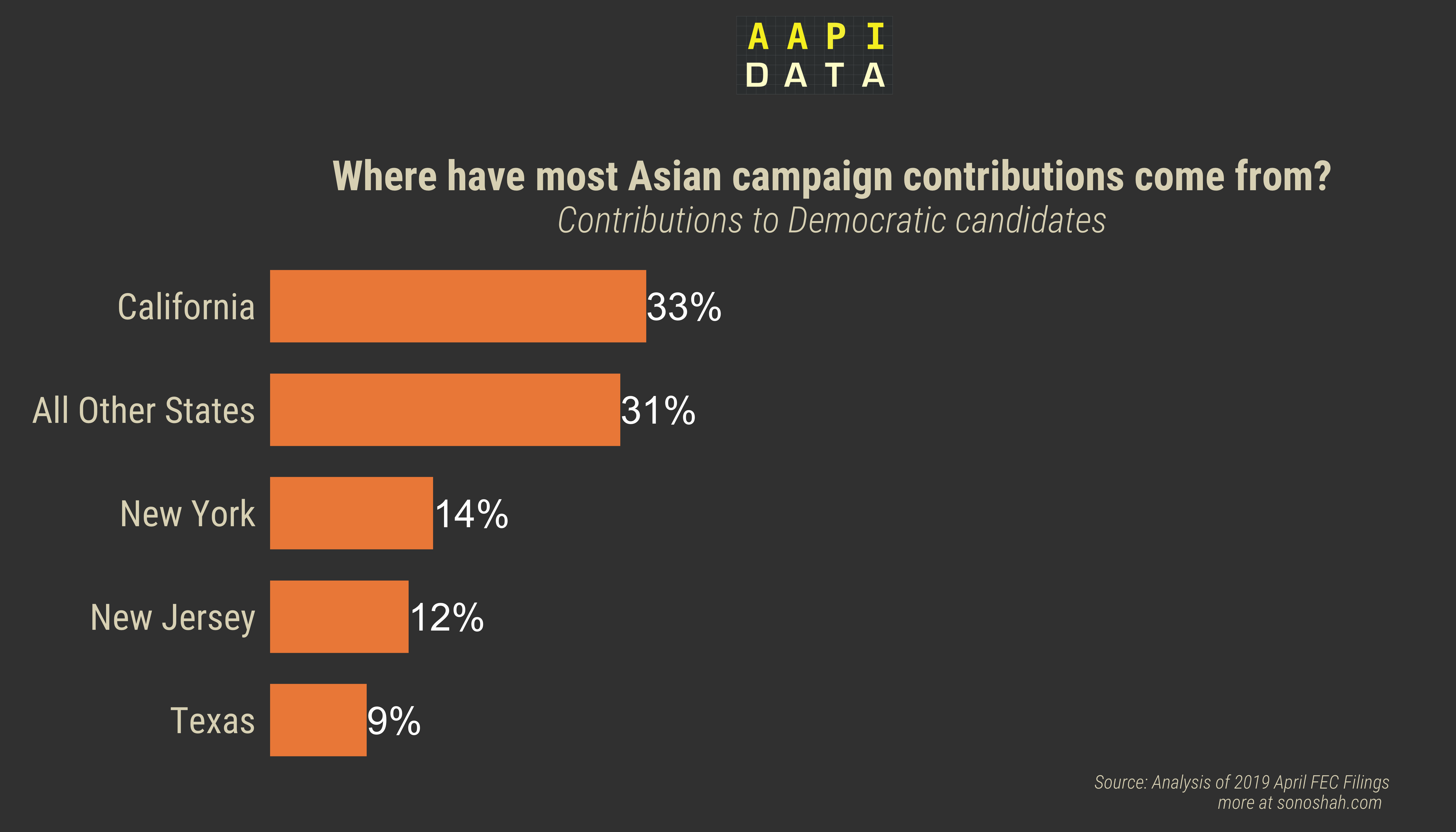 How I did my research:

I downloaded each of the April Quarterly 2019 filings for the 14 major Democratic Candidates and subset them to only look at individual-level contributions. Then, I estimated the race/ethnicity of each donor using an ethnic-surname analysis technique (post will be updated with link to methods post shortly).

Sono Shah is a  Ph.D. Candidate at UC Riverside and researcher at AAPI Data and the Center for Social Innovation.