The 2016 Presidential election saw a record increase in voting for Asian Americans. Between 2012 and 2016, about 1.14 million new Asian American voters entered the electorate, nearly double the average increase of 620,000 new voters in the prior three presidential cycles.[1]  Breaking down the data further, we find that these disproportionate gains were evident at all stages of participation: the growth of adult citizens, registered voters, and voters. Indeed, the increase in voter registration between 2012 and 2016 (1.46 million new registered voters) was more than double the average presidential cycle increase of 653,000 from 2000-2012. 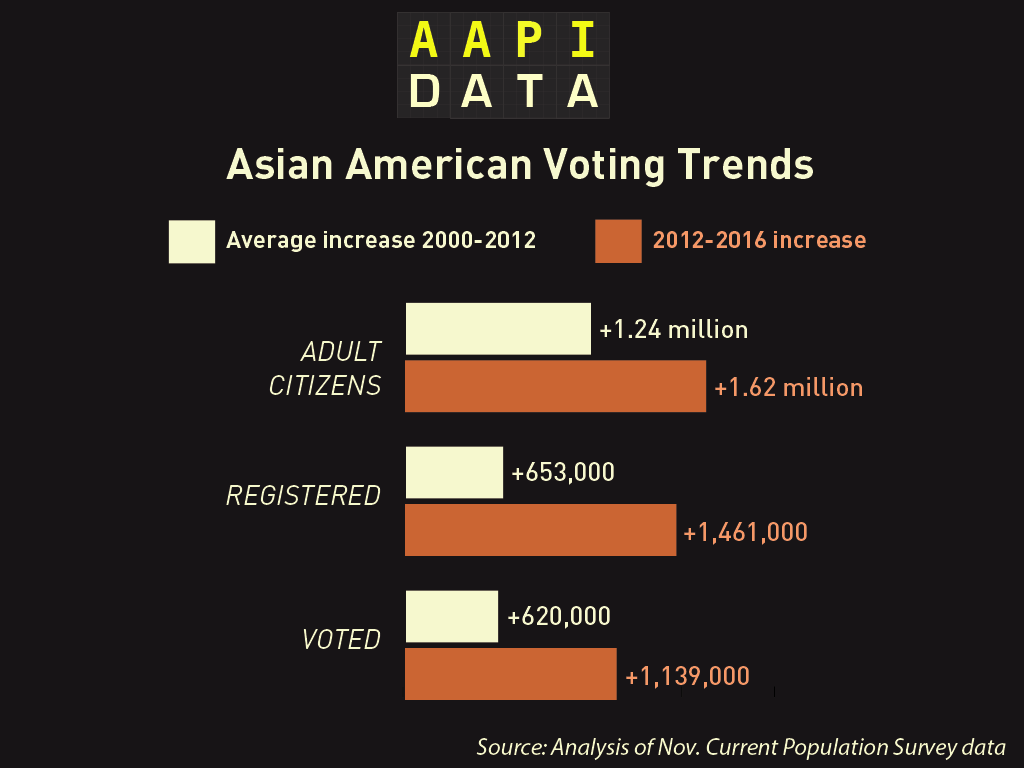 At the same time, it is important to recognize that voting rates among Asian American adult citizens remained low (49%) relative to Whites and Blacks (65.3% and 59.4%, respectively) and was slightly higher than voting among Latinos (47.6%). 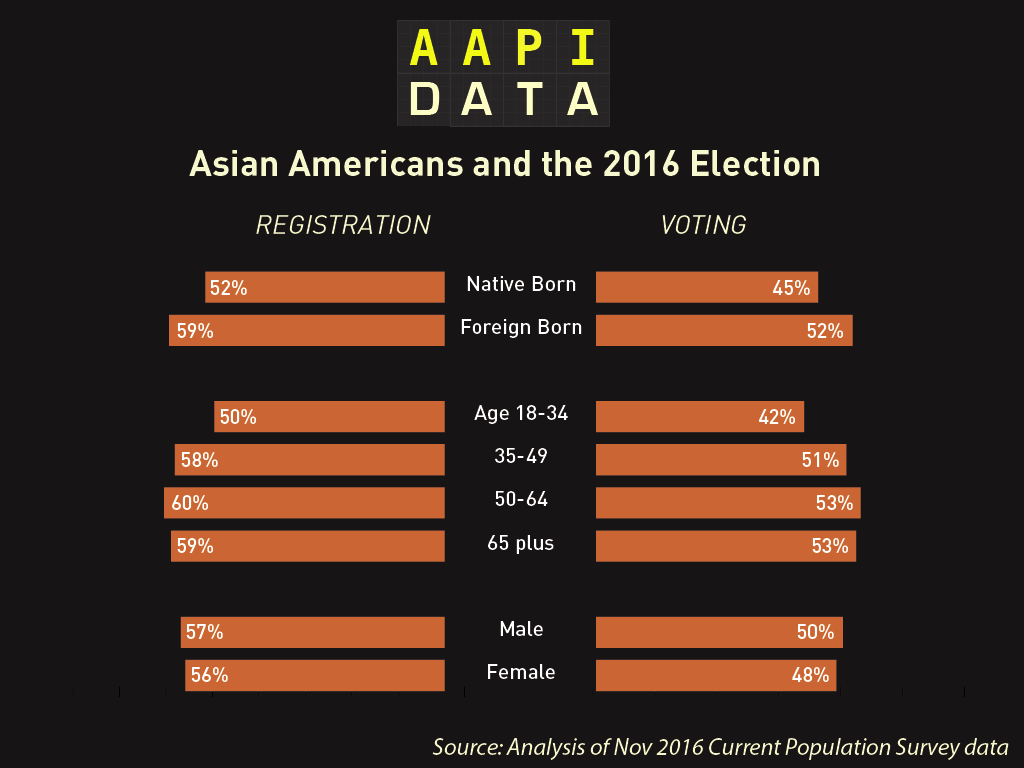 There were also significant differences by ethnic group.[2] In 2016, Indian and Japanese Americans reported the highest rates of voting (62% each), followed by Filipinos and Vietnamese Americans. By contrast, Chinese Americans reported the lowest levels of voting participation. These ethnic group differences also largely held true for voter registration, with Indian and Japanese Americans having the highest rates, and Chinese Americans the lowest. The higher rate of participation among Indian Americans is particularly notable given that this population is much more likely than other groups to be composed of recent arrivals to the United States.[3] 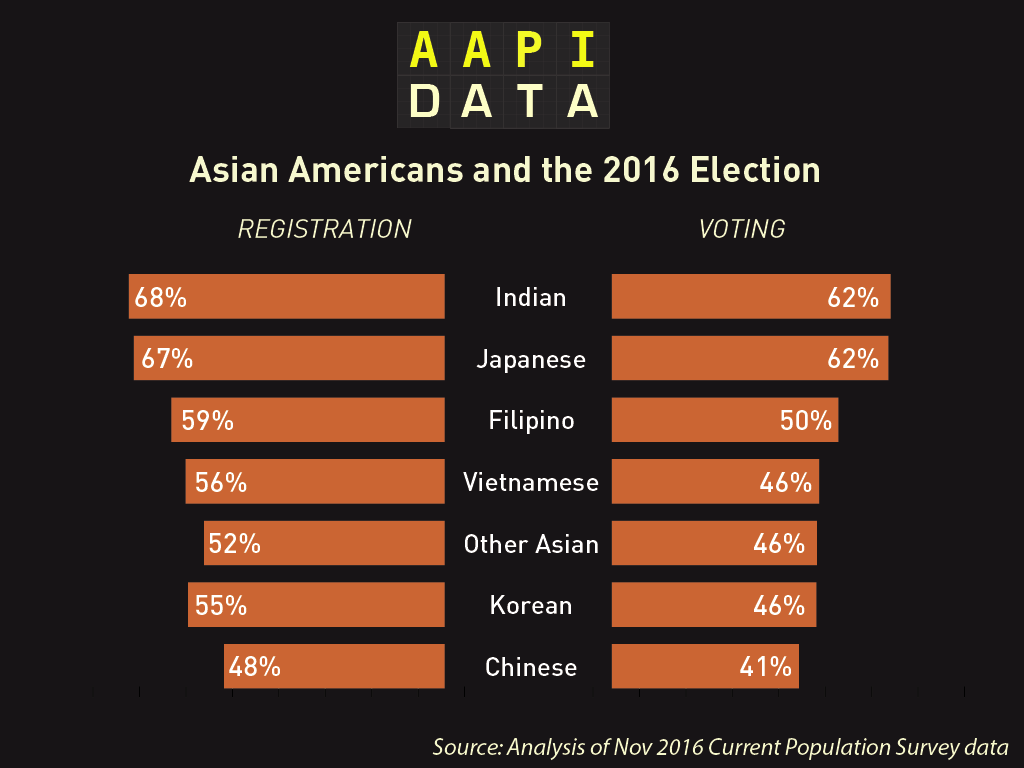 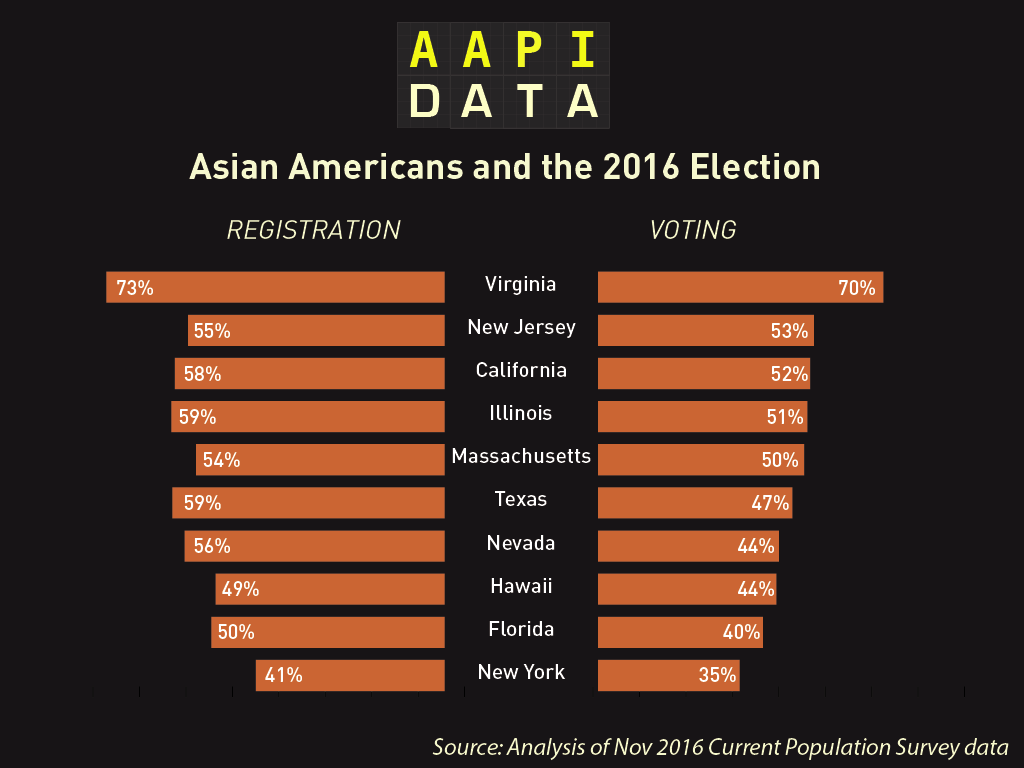 These state-level gaps are particularly concerning, given that New York has the second-largest Asian American population for any state and accounts for 8 percent of the national Asian American population. Some of the low voter engagement may be related to the lack of party competition in New York City and at the statewide level for presidential elections. While California also tends to have low party competition, voter engagement may be higher due to the top-two primary system and efforts to make voter registration easier in the state (including the implementation of online voter registration and the start of automated voter registration).

[1] These data are based on analyses of Current Population Survey reports from 2013 and 2017.

[3] This is true even when considering only eligible voters rather than all foreign-born residents.

[4] Here, we report data on states with more than 75 Asian American respondents who were eligible voters.