BY MAI NGUYEN DO & CHRIS PHAN

In March 2020, various state governors ordered a number of businesses to cease operations to combat the COVID-19 pandemic. Although businesses and workers across industries have been negatively impacted by the pandemic, some industries largely consist of  struggling,  vulnerable workers, and the challenges of navigating the pandemic are particularly acute in these industries and communities. For instance, Vietnamese Americans comprise nearly half of the nail salon industry, and mass unemployment has bred widespread uncertainty among Vietnamese American communities.

Prior to the pandemic, Vietnamese American nail salon workers already faced many challenges. Some manicurists are independent contractors or self-employed and therefore do not receive employer-based health insurance. Wage theft and other forms of exploitation are common in the industry. In 2017, several nail salon workers filed a lawsuit against their former employer, alleging that the owners of the nail salon had violated California minimum wage law. As Dat Tommy Phan notes in his Asian Pacific American Law Journal article, the introduction of Vietnamese refugees into the nail salon industry redefined the business, bringing down the cost of manicures and transforming them from an out-of-reach vanity procedure to an everyday treat. 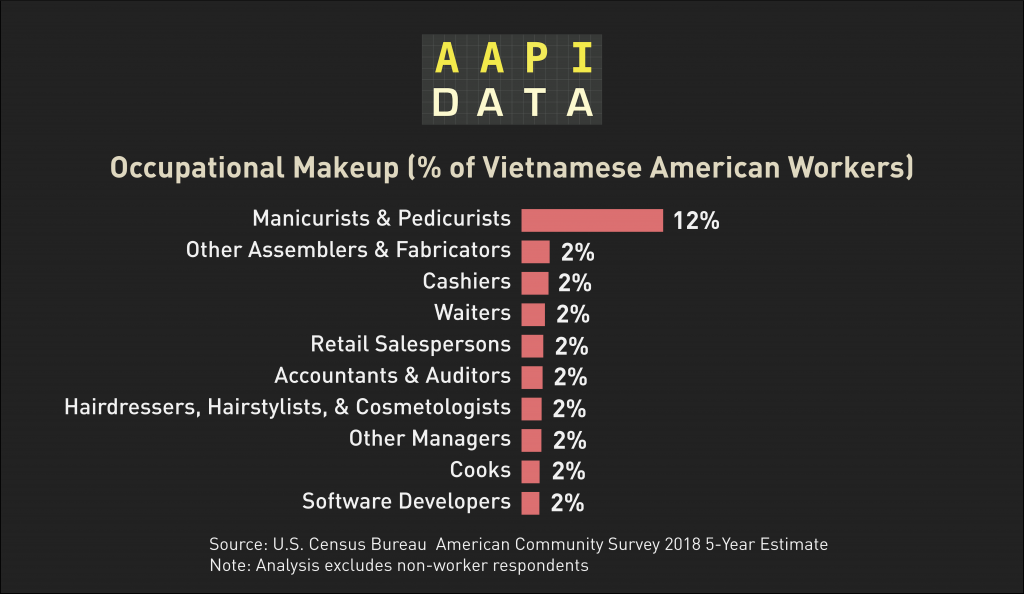 When the pandemic hit, assistance for those in the nail salon industry was varied and inconsistent. As previously noted, many manicurists and pedicurists, among other beauty industry professionals, are self-employed or independent contractors, so they did not qualify for unemployment benefits under the usual requirements. Unemployment benefits were not extended to independent contractors and self-employed workers until the end of April, several weeks after Congress passed its third coronavirus relief package. A June report from the California Healthy Nail Salon Collaborative and the University of California, Los Angeles Labor Center emphasizes that both nail salon owners and workers — many of whom are Asian American — are struggling. At the time of the survey, over a third of owners were unable to pay rent, and half could not pay rent beyond one or two months. According to the report, although most nail salons employ less than 10 people, only 6 percent of owners were able to keep their workers on payroll since the March 2020 COVID lockdown. Only 8 percent of workers have other jobs, while most do not have financial support from family, community, or other members of their household. Some survey respondents also said their households were single-income or reported being worried that they would no longer be able to afford to take care of their senior or child dependents.

The economic challenges of the past few months, in addition to health concerns and environmental disasters ravaging communities across the United States, have only exacerbated difficult conditions for Vietnamese American nail salon workers, many of whom are refugee and immigrant women whose income is stretched to sustain whole households. Despite the initial hurdles to accessing unemployment benefits, 43 percent of Vietnamese Americans voters reported having received unemployment benefits, according to our 2020 Asian American Voter Survey in partnership with Asian Americans Advancing Justice and APIAVote.

However, the California Healthy Nail Salon and UCLA report notes that many nail salon workers had difficulty applying for unemployment benefits or had not yet received benefits at the time they were interviewed, so it’s very likely that many people’s needs remain unmet outside of those who report having received assistance.

In a letter dated August 28, California Assemblymember Ash Kalra, who represents parts of San Jose, called on Governor Gavin Newsom to allow the salon industry to reopen and operate indoors. Kalra noted in his letter that recent economic, environmental, and health challenges “are only exacerbated in a district like [his] where the vast majority of salons are run by immigrant women, particular Vietnamese and Latina women, many of whom were already earning low wages before COVID-19.” The Governor had previously said that community spread of COVID-19 started in a nail salon, although he declined to elaborate on that statement. The state then began to allow nail salons to resume operations indoors as county guidelines allowed, but then a surge in COVID-19 cases forced nail salons to close again. Now, under pressure from some industry association, the state of California is allowing indoor salons to reopen without indication as to whether another stay-at-home order might be looming in the future.

The closing and reopening of nail salons isn’t just an issue of posturing and jockeying between state and local governments. It’s also a problem of tossing back and forth the already-precarious livelihoods of low-wage, immigrant workers for the purposes of political football. Nail salon workers will have to haul their equipment out, commit their bodies again to strenuous manual labor, and worry that another stay-at-home order will force them back to filing claims with unreliable, confusing unemployment benefit systems.

Kalra’s letter, along with the work of advocates such as those of the California Healthy Nail Salon Collaborative, highlights how some of the United States’ most marginalized workers are struggling even more than they were before the pandemic while often being shut out of conversations about recovery. Instead of focusing on the need for haircuts and manicures, conversations about reopening salons should be centered on ensuring the physical, mental, and financial safety and well-being of these workers. As state governments look to protect residents from the health effects of the pandemic, it is equally as important that vulnerable people without the means to work from home offices are sufficiently assisted in economically weathering this pandemic.

Mai Nguyen Do is a researcher for AAPI Data, a PhD student in the Department of Political Science at the University of California, Riverside, and an APSA Diversity Fellow. Their research interests include Southeast Asian refugee communities in the United States and deportation. In addition to their work in political science, Mai is also the author of two poetry collections, Ghosts Still Walking (Platypus Press, 2016) and Battlefield Blooming (Sahtu Press, 2019), and they have received support from the AAPI Civic Engagement Fund for their art.

Chris Phan is the Field and Programs Associate at APIAVote. In her day to day work, she works with local community partners to implement voter contact and education programs, manages APIAVote’s voter protection hotline, and collaborates with research groups and national AAPI coalitions to develop more civic engagement strategies. Outside of APIAVote, she studied computer science and urban studies at Stanford University (2019) and is the Ambassador Coordinator for the 2020 Project, a project that works to register AAPIs to vote. In her spare time, she explores the intersection of art and advocacy through dancing and writing about Vietnamese American identity.