The RAISE Act would affect the majority of Asian immigrants to the United States. Asian Americans of all political stripes would do well to pay close attention.

Many of the immigration issues that arose during the 2016 Presidential election centered around rallying cries regarding the constructions of “walls” and deportation of undocumented immigrants.  However, while bluster about “building walls” still remains just talk and the numbers of deportations and arrests of undocumented people have remained at levels similar to that of the Obama administration, there has been some progress in Congress since the start of 2017 towards the reduction of other modes of entry into the U.S. – modes heavily relied upon by Asian Americans and their families.

Two Republican U.S. Senators are sponsoring a plan to restrict immigration by about 50% in the next ten years, and this plan enjoys the full support of the current President. Senator Tom Cotton (R-AK) and Senator David Perdue (R-GA) have President Trump’s support in their  bill introduced in August 2017 that would cut the number of legal immigrants allowed entry into the US each year from 1,000,000 to 500,000. This new bill is a more stringent version of a bill that Sens. Cotton and Perdue introduced in February 2017 called the Reforming American Immigration for Strong Employment Act (RAISE) Act.

Under the RAISE Act, the following family preferences were to be eliminated:

Thus, under this system, American citizens would be unable to bring their parents, siblings or even children to their country. Legal permanent residents would not be able to reunite with their adult children.

In addition, the RAISE Act will eliminate the 50,000 visas available under the Diversity Lottery, which seeks to encourage immigration from countries with historically low immigration rates to the US.  Countries in the Diversity Lottery include Nepal, Burma, Thailand, Malaysia, Indonesia, Laos, Cambodia, Taiwan, Singapore, and Japan. And finally, the number of refugees given permanent residency under the RAISE Act was to be limited to 50,000 annually. In 2016, the U.S. admitted about 85,000 people as refugees from countries such as the Democratic Republic of Congo, Syria, Myanmar, Iraq, Somalia, Bhutan, Iran, Afghanistan, and Ukraine.

Some observers note that the RAISE Act “targets the family reunification component of the 1965 Immigration Act by giving visa preference only to immediate family,” and would eliminate most visas for parents, siblings, and married adult children. As Asian immigrants account for a quarter of all immigrants to the U.S. since 1965, limits such as those proposed in the RAISE Act will significantly impact our communities.

Over the past decade, Asian immigration to the U.S. has been growing steadily. For example, in 2012, about 146,000 legal permanent resident visas “were issued to nationals from Mexico, followed by 82,000 from China, 66,000 from India, and 57,000 from the Philippines,” and in 2015, China and India each sent more people to the U.S. than did Mexico. Some studies even indicate that the number of Asian immigrants would surpass those of Latinos by 2065 if current trends in immigration continue.  However, if immigration is cut by half pursuant to bills like the RAISE Act, those trends may be strongly affected.

The most common way for Asian immigrants to migrate to the U.S. has been through family-sponsored visas, accounting for 57% of all permanent resident visas.  According to the latest estimates published by the Office of Immigration Statistics and summarized in the figure below, 21% of Asians in 2015 who obtained legal permanent resident status were through family-sponsored preferences, 36% of Asians were issued to immediate relatives such as parents, siblings, and children.  The heavy reliance on family preferences in our community can be also seen in the long backlogs of visas for Asian countries. For example, siblings of U.S. citizens from the Philippines must wait more than 23 years for a green card, and in general, according to Ramakrishnan and Ahmad, “Asian countries account for 42 percent of the estimated 4.2 million individuals waiting abroad due to backlogs in issuing of family visas.” Backlogs from the Philippines, India, Vietnam, and China range “from about 225,000 to 400,000 for each country.” 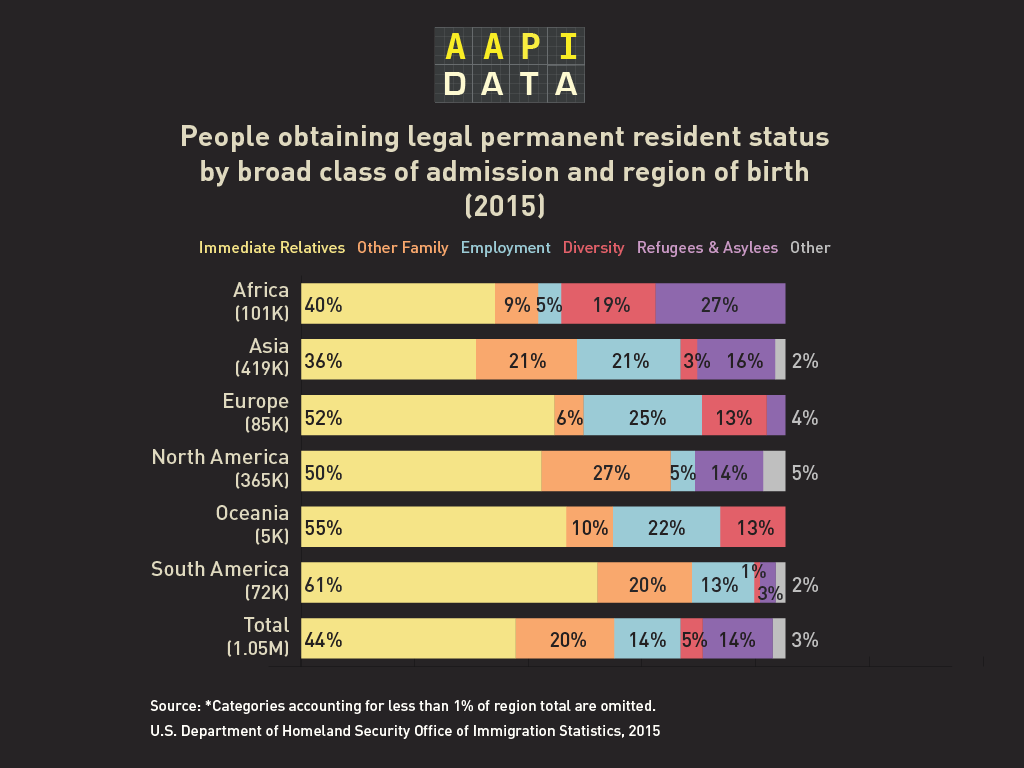 After family-sponsored means of entry, the next largest group (21%) for Asian immigrants were employment based. Currently, bills like the RAISE Act do not elaborate on how work visas would be determined other than to label them as “merit-based,” and it is unclear how “merit” will be defined and how these visas will be allocated among countries. Close behind work visas were refugee/asylee visas at about 19%http://aapidata.com/wp-content/uploads/2017/09/region_bylawfulpermresidence_2016.png. Between 2001 and 2010, over 47% of refugees were from Asian countries.

The majority of Asian Americans (about 60%) are foreign-born, and as such they will be deeply affected by immigration policies like those proposed by Senator Cotton and Senator Perdue that eliminate or reduce family preferences, refugee admittance, and other modes of entry.

While many arguments made by restrictionists like Cotton and Perdue are based on the view that there are “too many unskilled immigrants… competing with low-skilled Americans for jobs,” there is also a distinct cultural argument that “it’s time to let the American melting pot cool down for a spell.” As Senator Cotton remarked, the “goal here [of the RAISE Act] is to get our immigration levels back to historical norms, to take something of a pause to allow the economy to catch up with the immigrants that we have allowed into our country over the last two generations.”  As the fastest growing group of immigrants, Asian Americans are clearly the tide that Cotton wants to stem, as he wishes to return to a “historical norm” that existed prior to 1965.

Senator Cotton’s views are shared by other Republicans such as Republican Rep. Lamar Smith of Texas who further elaborated on this well-worn anti-immigrant sentiment when he noted that “[w]hen you have so many immigrants being admitted, they tend to cluster together, they tend to maybe be a bit more slow in learning the English language, to becoming acculturated, to becoming patriotic Americans.” Smith intends to introduce a version of Cotton and Perdue’s RAISE Act in the House.

Anti-immigrant sentiment like that voiced by Rep. Smith is very familiar to Asian Americans and the devastating impact of plans like the RAISE Act on Asian Americans and their families is obvious. As the community with the highest proportion of people with limited English language proficiency and one – like most immigrant communities – that sometimes “clusters” in urban and suburban enclaves , it’s difficult not to see that GOP politicians like Smith, Cotton, and Perdue are working to “take a break” from Asian immigration.

Thus, Asian Americans of all political stripes would do well to pay close attention to highly restrictive immigration legislative attempts and voice their concerns on behalf of our families and communities. For anti-immigration advocates like Cotton and Perdue, Asian Americans, the fastest growing racial group in the U.S. are the tide they want to stem.