BY TYLER HE, ANDREW VUONG, AND THUAN TA

Voting is one of the most important civic responsibilities for American adults. There is a multitude of reasons as to why people vote but some carry a much bigger significance, such as voting on which political party to support, which bills can become laws, or who is to be voted into office for president. With such a wide usage of voting, surely every American is clamoring to get their voices heard on every single topic, right? Partially right. Asian Americans often have the lowest voter turnout rates of any racial group in the U.S. They face a multitude of obstacles to voting, including lower rates of English proficiency and the lack of voter outreach by both major political parties. For years, Asians have had their voices left out due to their reputation as the “model minority” of the U.S. which is reflected in their proficiency in English, the amount of Asians that actually vote, and the engagement of Asians with the two main political parties.

In the past, many Asians immigrants have come from various countries to have a clean start in the U.S. Many of them were unable to contribute their votes in the U.S. at the time due to their low proficiency in English. Nearly 77% of Asian Americans speak another language besides English at home which can cause difficulties for families.  Due to their limited English proficiency, many Asian American immigrants have a hard time living in the states and rely on their children to help them translate the voting process into their native language. There is not enough assistance for Asian Americans that it becomes a hassle for them to vote since English is not their first language. It is now more important than ever that Asian Americans become more politically involved due to their diminishing nonpartisanship and rising population growth rates.

Since the start of the 21st century, Asian Americans have been the fastest growing ethnic group in the U.S. Nationwide; they grew 46% between 2000 and 2010. Excluding Hawaii, Asian American population grew at least 30% in every single state in that ten-year span alone. In California alone, there are nearly 38.5 million total people with nearly 5.3 million (15.6% of the population) Asian Americans as of 2015. Just within the last three election cycles, there has been a growth of over 600,000 new Asian American voters nationwide. These new generations of Asian Americans can lead to increased voter activity since they are more likely to be proficient in English and will not require assistance in translating, unlike their parents. It is now more important than ever that Asian Americans become more politically involved due to their rising population growth rates. 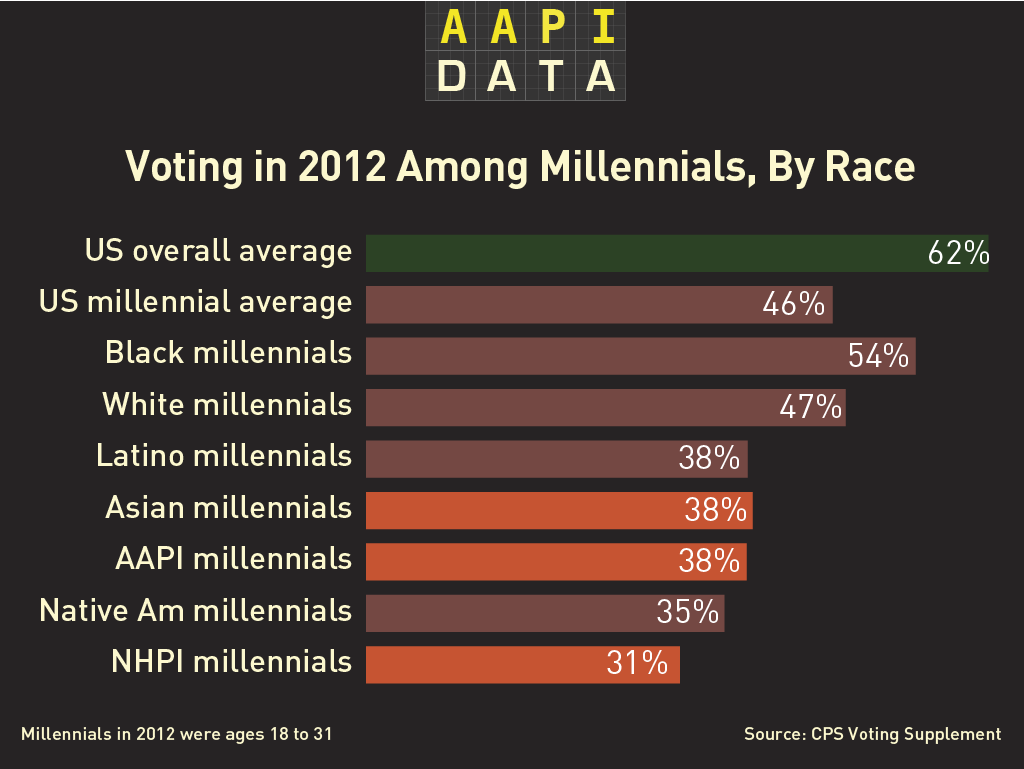 Voting is a fundamental right that every citizen should exercise regardless of whether or not they are into politics. Every vote matters and no voice is too small to not be worth hearing. Asian Americans should not be suffering from lack of representation as they are a wide and diverse group of people with rapid growth. With the rising population of Asian Americans, it is of utmost importance that they have a voice in politics or else their problems will not be represented. They may face obstacles in the path of voting due to their limited English but each generation beyond the first yields more voices. With greater participation, Asian American voters will provide incentives for the two major political parties to seek their support as there will be more votes up for grabs. Voting is not only a fundamental right but also a voice for the future of Asian Americans and every American citizen. Voting is our duty. Voting is our right. Voting is the voice of the people to fight for what is right.

Tyler He – I’m a senior from South San Francisco High School that’s interested in being a CS major and giving back to my own community.

Andrew Vuong- I am a Sophomore from Lowell High School and I am gaining more leadership skills as each year passes.

Thuan Ta- I am a Junior from South San Francisco High School. I am an Asian American trying to do big things to change the world for the greater good.