Early this week, New York Times deputy Metro editor Michael Luo wrote An Open Letter to the Woman Who Told My Family to Go Back to China. This piece followed up on a Twitter conversation he had initiated, #thisis2016, which brought out hundreds of stories of fellow Asian Americans who had been treated as perpetual foreigners.[1]

Today, the New York Times continued the conversation with a video piece in their Race in America series, #thisis2016: Asian-Americans Respond.[2] The video featured reactions from a range of Asian Americans describing instances when they have been treated as foreign. While powerful, the video was lacking in one dramatic aspect: the lack of South Asian representation.

Today, there are about 4.5 million South Asians living in the United States. That is larger than the population of 25 states, including Utah and Oregon. About 1 in 4 Asian Americans is South Asian, and as the figure below indicates, they are the fastest growing segment of the Asian American population, from 19% in 2000 to 26% in 2014. 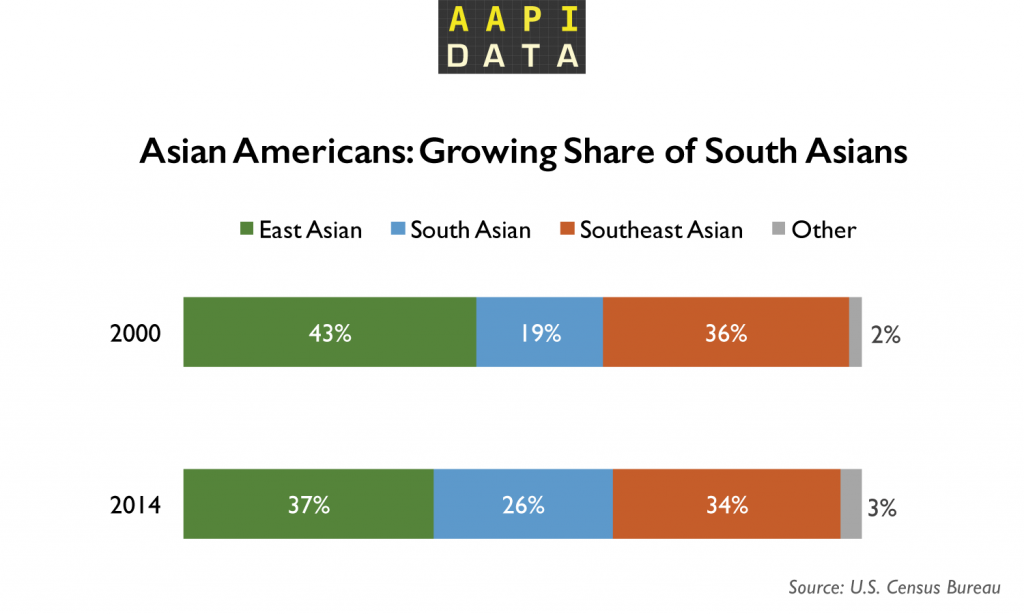 Within the South Asian population in the United States, there is significant national origin diversity (see figure below), which in turn is associated with significant diversity in poverty, income, religion, and areas of settlement. Indian Americans are the second-largest Asian group in the United States, and Bangladeshi Americans are one of the fastest growing segments of the foreign born population. 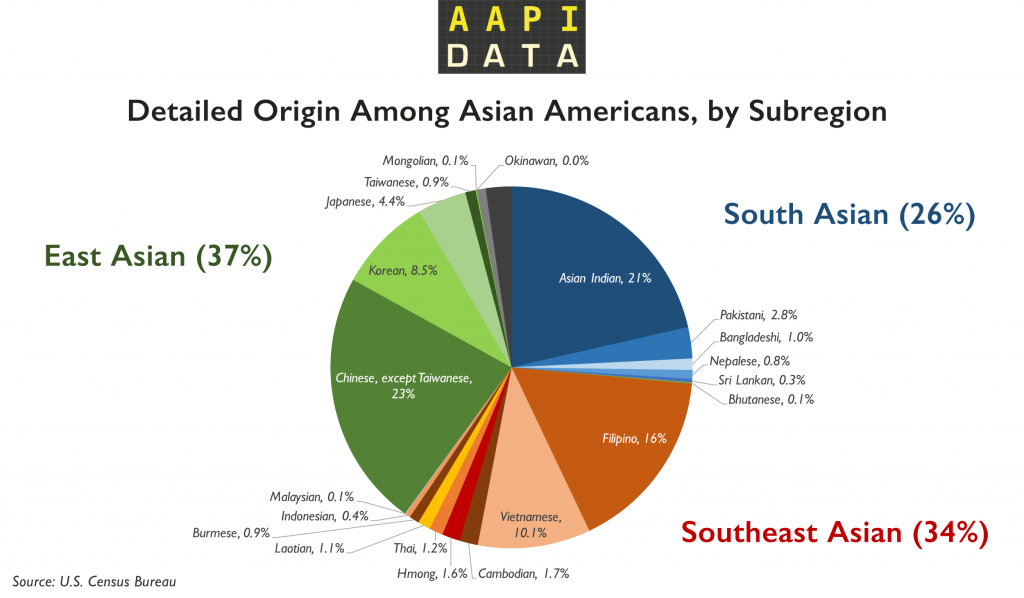 Importantly, South Asians have also experienced far more violent and dangerous reactions than simply being told to “go back to your country.” The first person killed in a hate crime after 9/11 was a Sikh American and, since then, hundreds of hate crimes have been reported, including the 2012 massacre at a Sikh temple in Oak Creek, Wisconsin. Hindus, Muslims, and other South Asians have been attacked, too, and these communities finally scored some policy victories, in 2015 when the Department of Justice and the FBI agreed to update their hate crimes database, and in 2016 when California passed a law providing additional support for anti-bullying efforts involving these communities.

South Asians have also achieved some significant measure of success, from the careers of Aziz Ansari and V.V. Ganeshananthan to the public service of Neera Tanden and Captain Humayun Khan. The first Asian American elected to Congress in 1956 was Dalip Singh Saund, and a record number of South Asians are running for Congress this year.

South Asians have been an integral part of Asian America, and are among its most fastest growing segments. It is time for news and media representations of Asian Americans to catch up to that reality.

[1] Even though Asian Americans have been living in the United States for over 250 years, they are still treated like perpetual foreigners. Research on the “perpetual foreigner” syndrome dates back at least to 1987, and the effects of this stereotype range from increased depression and lower life satisfaction to hate crimes against those perceived to be representative of foreign countries.

[2] The New York Times should also consider unhyphenating “Asian American” when used as a noun, but that is a matter for another day, and there are other, non-data focused pieces that have addressed this issue.

[3] Thanks to a reader for pointing out the error (Nepal, Sri Lanka, Bhutan were not considered part of British India).