We have all heard the stereotype of Asian Americans being intelligent and getting into “good” colleges. But how did that stereotype get placed upon Asian Americans? Studies have shown that more Asian Americans tend to graduate high school and get a bachelor’s degree than other races, but is that showing the disparities between all the different subcultures of Asia? In actuality, Southeast Asian Americans have the lowest high school graduation and bachelor degree rates, which are lower than both Latinos and African Americans.

According to the 2010 U.S. Census Bureau, 34.3% of Laotians, 38.5% of Cambodians, and 39.6% of Hmong adults in the U.S do not have a high school diploma. The 2006-2008 American Community Survey showed that 65.8% of Cambodian, 66.5% of Laotian, 63.2% of Hmong, and 51.1% of Vietnamese Americans have not attended college. When Southeast Asian Americans get grouped into the stereotypical category of “Asians”, they are not able to receive the necessary support needed because societal expectations propose that all Asian Americans are more than capable of graduating high school and college. For example, Southeast Asian Americans are denied access to financial and academic support because they have checked the “Asian” category box. Due to the model minority myth, people have automatically assumed that they are the top academic performing of all races. The model minority myth suggests that Asian Americans have been universally successful due to hard work and good cultural values, so other racial minority groups need only follow if they want to be successful too. However, this is not true. 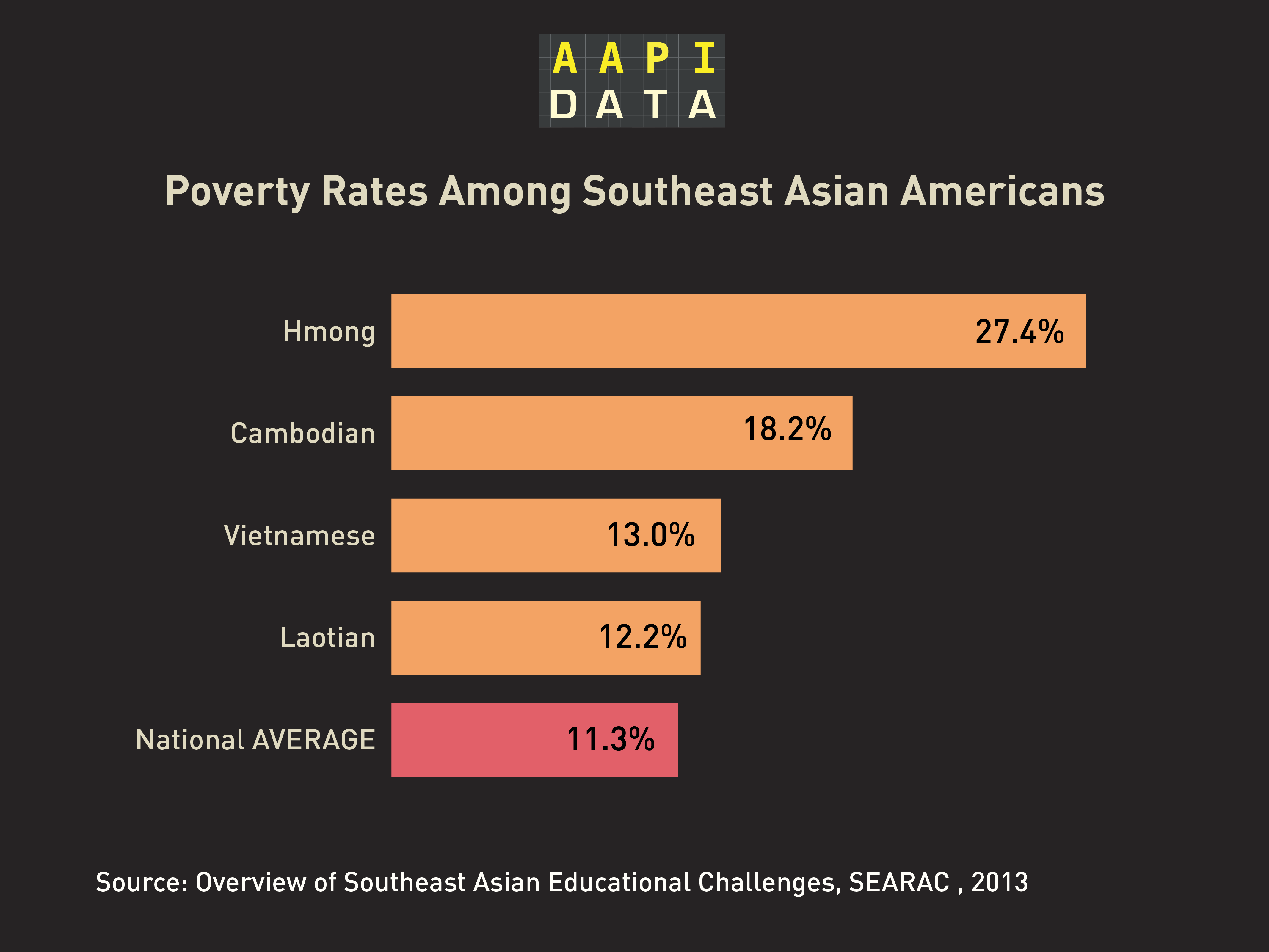 Another roadblock for Southeast Asian Americans’ ability to get into college and graduate is the language barrier. According to the Southeast Asia Resource Action Center, only 8.7% of the U.S population overall speaks English less than “very well”, while 39.2% Cambodian Americans, of 37.6% Hmong Americans of 38.4% Laotian Americans, and of 51.5% Vietnamese Americans speak English less than”very well.” Since education is primarily in English, having a less than proficient ability to speak English is a gigantic detriment to the education of many Southeastern Asian Americans.

Furthermore, many Southeast Asian Americans also do not have access to the resources and quality education they need to succeed. According to UC Berkeley, many low-income neighborhoods where Southeast Asian Americans reside lack facilities such as libraries, tutoring centers, and programs, which are needed to reach their fullest potential. Also, information is continuously being disseminated through the teachers and counselors. Unfortunately, students tend to ignore the advantage the information it comes with. There are also causes that promote the problem by giving basic information. However, this basic information can be misinterpreted.

According to PBS news, Chang, a 22-year-old Hmong American who grew up in Central Valley city, chose to go to California State University rather than UC Berkeley like her brother knowing that her family wouldn’t be able to afford her tuition. Growing up, Chang barely talked to her parents about college since they never had access to education growing up. Chang’s parents worked in the fields as kids, therefore they couldn’t help Chang get into college like some of her peers’ parents could. Breaking the stereotype of ALL Asians getting into colleges, Southeast Asians immigrants including Hmong, Cambodians, Laotians, and Vietnamese have distinctly low college graduation rates compared to Chinese, Japanese, and Korean Americans, who are more likely to obtain a Bachelor’s degree. Therefore, this shows the disparities in access to resources that Asian Americans receive.

Ultimately, the disaggregation of data is a necessity to ensure the fairness and awareness of all types of Asian Americans. Without disaggregated data, many southeastern Asian communities will be left out of the financial and educational support that Asian Americans qualify for.

Jason Ng: A 17-year-old AAPI advocate that loves to learn more about the AAPI issues that aren’t as mainstream.

Evelyn Chan: I am currently a 16-year-old junior at George Washington High School in San Francisco who finds interest in STEM and advocating for AAPI issues.

Jessica Chen: A 15-year-old who is currently attending Phillip and Sala Burton in San Francisco who advocates for and promotes social justice.