In the aftermath of the 2021 Virginia gubernatorial election, a widely-accepted narrative explaining Republican businessman Glenn Youngkin’s victory over former Democratic governor Terry McAuliffe has taken hold: a focus on education and critical race theory (CRT) was pivotal for Youngkin’s win. Some commentators in turn attributed his win to Asian American voters. One Washington Post op-ed concluded that Youngkin has “Asian voters to thank” because they make up significant portions of Northern Virginia communities, which have recently faced highly contentious debates on CRT and education issues. Despite the fact that CRT is not taught in Virginia schools, it has become a “catch-all buzzword for any teaching in schools about race and American history,” according to the Guardian.  Many are suggesting that Youngkin’s approach could be a blueprint for the GOP going into 2022.

We founded Amplify Asian America in 2020 to engage young Asian Americans in civic life. And our analysis of the 2020 Asian American Voter Survey (AAVS) helps explain why Asian Americans, especially those 18-34, may not be as vulnerable to Youngkin-style campaigns as might be assumed. First, fully 61% of Asian American voters support “the government doing more” to ensure Blacks have equal rights with Whites. Among those 18-34 the proportion who support government intervention to ensure racial equality shoots up to 71%.

It is clear that many Virginia voters endorsed the Republican candidate’s approach to race,  as CRT was one of the top issues for voters. Exit polls also show that voters who believe parents should have a large say in what schools teach broke heavily for Youngkin. But, conservative positions on race did not resonate equally across the electorate. They were most effective among Republicans. 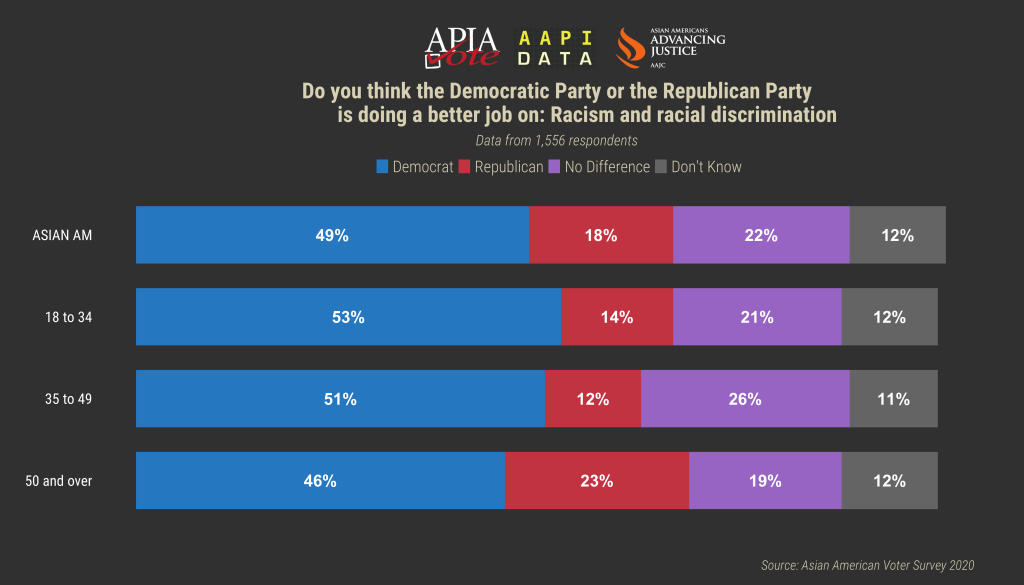 On education, ostensibly the focus of the CRT debate, Asian American youth and young adults believe Democrats handle these issues better than Republicans. According to the 2020 AAVS, 41% of all Asian Americans report that Democrats are doing a better job on education, compared to 22% who say Republicans perform better. Among 18-34 year olds, this support gap increases to 30 points in favor of Democrats (47% Democrats, 17% Republicans). 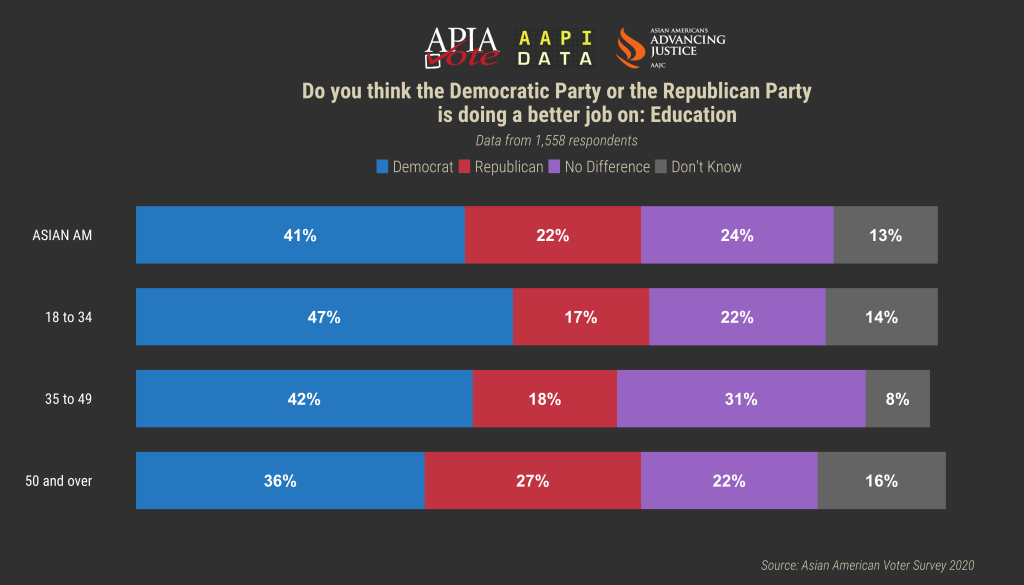 Perhaps one of the most important indicators of where Asian Americans stand on race in public life is how they feel about the Movement for Black Lives. Again, we see that younger Asian American voters are highly supportive of Blacks Lives Matter. For example, fully 69% of this group support the Black Lives Matter movement, compared with 54% of Asian Americans overall.  During the wave of racial justice demonstrations in 2020 after the murder of George Floyd, many young Asian Americans deepened their involvement in racial justice activism. One example involved translating an open letter on anti-Blackness in Asian communities into 26 different languages to help educate family members. In addition, 68% of young adults are in favor of local governments shifting spending from law enforcement to other programs. 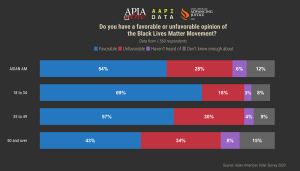 Conservative racial appeals will no doubt be part of the Republican repertoire going into 2022. But rather than assume that Asian Americans will simply go along with the anti-CRT wave, both parties should look to the ways Asian Americans themselves express views about addressing racism and racial discrimination in public life. As younger voters are likely to continue to turn out at higher rates, backing policies that align with their views will be key to winning their support.

Joey Goodman, Rahul Verma, and Chris Phan are members of Amplify Asian American (A3), a non-profit focused on empowering Asian American youth and young adults to become stronger advocates in voting and civic participation. To learn more about us, follow us on Facebook, Twitter, and Instagram or visit our website.