As Asian Americans gear up for what some anticipate will be one of the most consequential, most contentious presidential elections in U.S. history this November, it is important to consider which individuals within the Asian American electorate are most up for grabs.

Surprisingly, Hmong Americans are a group that stand out in terms of fitting this category. Of the Hmong respondents surveyed in the 2016 Post-Election National Asian American Survey (NAAS), a majority (80%) rejected both the Democratic and Republican labels, choosing instead to identify as either Independent, or to say they “don’t know,” or “do not think of themselves in terms of political parties.”[1] What characteristics are associated with Hmong Americans who do not identify with either major political party? What might account for Hmong Americans’ relative lack of political affiliation and how might this matter in November?

Nonpartisan Hmong Americans reported distinct opinions from the general U.S. population with regard to major political figures and social movements, as shown in Table 1. More NPHAs (41%) held unfavorable views toward Trump compared to NPHAs who favored him (28%). More NPHAs held favorable views toward Clinton (51%) than disfavored her (20%). The vast majority (81%) of NPHAs held favorable views toward Obama. Overall, NPHAs tended to view the Black Lives and DREAMER movements more favorably than the Tea Party movement. That said, there is a sizeable group reporting “no opinion” toward major political figures and issues. 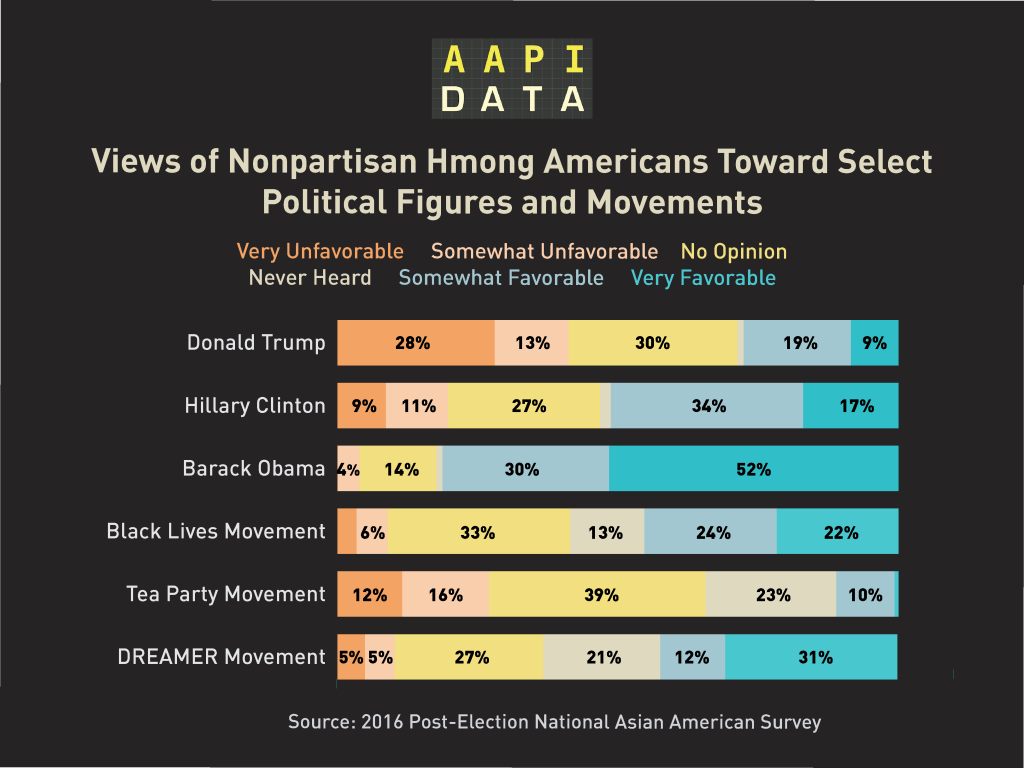 Somewhat consistent with the data presented in Table 1, the NAAS shows that during the November 2016 presidential election, 68% of Nonpartisan Hmong Americans who were registered voters voted for Clinton while 26% of them voted for Trump, and 6% of them voted for some other candidate. Does this mean we can count on NPHAs to be more liberal when it comes to voting? Not necessarily.

Data from the 2016 Post-Election NAAS reveal that 74% of Hmong American registered voters voted for Hilary Clinton, while 21% of voted for Donald Trump in the 2016 presidential election.[2] This result might lead to the assumptions that Hmong Americans’ political party identification corresponds with their voting choice, or that one of the major political parties has done a better job than the other at recruiting Hmong American voters. Evidence from the 2016 Post-Election NAAS reveals a much more complicated story, suggesting that perhaps neither of these assumptions holds true. 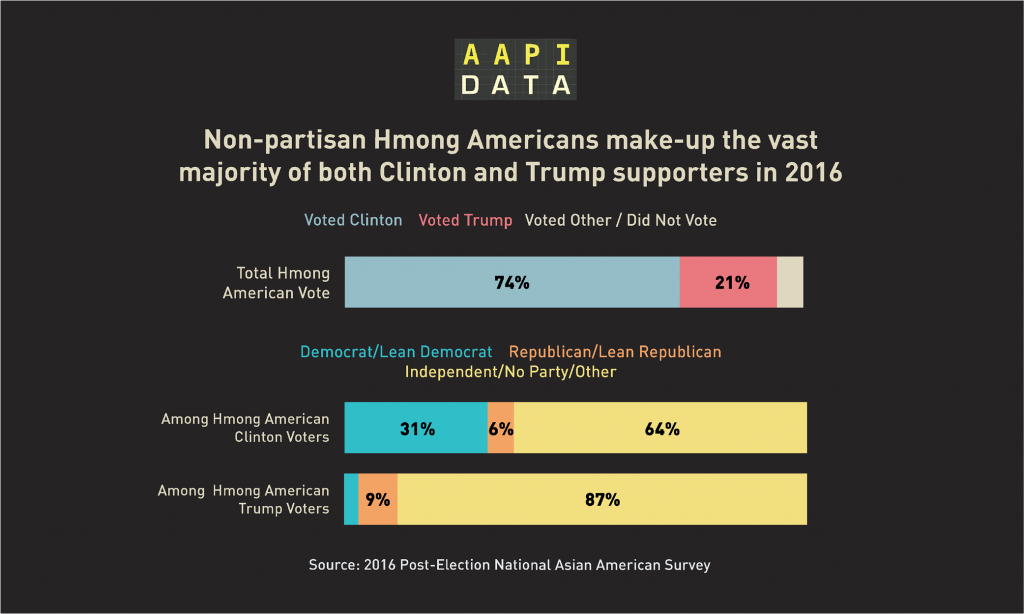 One primary explanation for the high levels of non-partisanship observed among Hmong Americans is very low outreach by partisan and nonpartisan organizations to Hmong American communities. The available evidence (more than 80% of non-partisan Hmong Americans do not report contacted by either of the two major political parties), suggests that neither political party made concerted efforts to target this group in 2016. Lack of mobilization to this group is especially surprising given that Minnesota, sometimes considered a Presidential Battleground state, is a major population center for Hmong Americans.[4]Although there may be sporadic, local efforts to reach out to Hmong Americans, there certainly has not been any recent national effort to actively mobilize the Hmong American electorate. Where does this leave us?

This leaves Hmong Americans with the burden of mobilizing themselves to engage with the political system. As such, grassroots organizing is crucial. Community-based organizations with political experience and sufficient discretionary resources to mobilize Hmong Americans will play very important roles in this effort.

Since the U.S. Secret War in Laos in the early 1960s, Hmong have had an asymmetric relationship with the U.S. government. Besides causing unimaginable loss of life, the Secret War caused more than two hundred thousand Laotians, including over 100,000 Hmong, to become displaced refugees outside of Laos. After their arrival to the U.S., Hmong’s asymmetric relationship with the U.S. has fluctuated from time to time depending on changes in U.S. bilateral and multilateral trade and political relations. As international political contexts changed over time, Hmong former refugees and their U.S.-born children have, at times, been treated as U.S. allies, but at other times, as aliens ineligible for public benefits, as second class citizens, as perpetual foreigners or, even worse, as terrorists.  With the exception of providing eligible permanent legal residents with time-limited public benefits, the federal government has seldom actively supported Hmong Americans with the opportunities and economic resources they need to meaningfully participate in the political process. It was not until 2000-2001 that eligible Hmong veterans of the U.S. Secret War—veterans who are still not recognized as veterans—were given limited accommodations to become naturalized U.S. citizens. Hmong American-led organizations or associations that have the potential to develop Hmong’s political capacity to influence the political system are often under-funded or seriously under-funded, if they receive public funding at all. Anecdotal evidence suggests that well-qualified Hmong American political actors who seek meaningful involvement in the political process by, for example, participating in local electoral campaigns and seeking partisan support from one major party or another, have sometimes been disappointed by the exclusionary, if not also racist practices of some members of the inner circles of established political parties. That Hmong Americans have the burden of democratic integration carries forward a past injustice.

[1] In this paper, calculations are based on the weighted sample of Hmong American adults from the 2016 Post-Election National Asian American Survey. The actual number of Hmong American adults interviewed in this survey was 351 (see Ramakrishnan, Wong, Lee, and Lee 2017). As discussed here, political party identification (variable pid4) includes “leaners”—those who initially did not identify with a party but said they felt closer to a party after being prompted. Ramakrishnan et al. 2017, in their report, list Hmong Americans’ party identification as 19% Democrat, 11% Republican, and 70% Independent/Other. See p. 16 of http://naasurvey.com/wp-content/uploads/2017/05/NAAS16-post-election-report.pdf. The discrepancy between my results and those reported in Ramakrishnan et al. 2007 are likely due to data cleaning that took place before the data were publicly available. Note that my analysis of the 2016 Post-Election NAAS data agrees with the figures listed for Hmong American party identification at the following AAPI website as, 15% Democrat, 6% Republican and 80% Independent/Other: http://facts.aapidata.com/nationaldata/