Most news stories focus on Asian Americans in elite colleges. Most actually don’t go there, and many students struggle.

The Asian American and Pacific Islander (AAPI) community is extremely diverse in terms of culture, language, and experiences in the United States. In California, it constitutes about 16% of the total population, and almost 90% of Asian Americans and over 70% of Pacific Islanders begin college in one of California’s public community colleges or four-year universities.

An accurate assessment of AAPI student outcomes in California’s post-secondary institutions must measure the linguistic, cultural, religious, socioeconomic, and historical diversity of AAPI subgroups that can be statistically obscured when grouped under the large AAPI umbrella. This issue was recently addressed in terms of health outcomes when in September 2016, California Governor Jerry Brown signed the AHEAD Act which required the California health department to disaggregate data for AAPI subgroups to better serve the diverse health needs of AAPIs.  The original bill (authored by Assemblymember Rob Bonta) included data disaggregation in higher education, but that portion was dropped prior to reaching the Governor’s desk.  Currently, however, California’s public colleges and universities have committed to collecting and sharing disaggregated data regarding the AAPI community.

Data disaggregation in higher education will be critical to implementing more efficient and streamlined methods of meeting the disparate needs of California’s second fastest growing racial group.  As shown below, when disaggregated data is examined, a more accurate picture of the AAPI community can emerge, and therefore, efforts to serve the AAPI can be more targeted and likely more effective in improving student outcomes that benefit all Californians.

While Asian American admissions to elite public universities like UC Berkeley and UCLA get the lion’s share of media attention, it is important to note that most Asian American students in California do not attend a UC. Indeed, the majority of AAPI students attend a California Community College (CCC), with about 155,154 AAPI students enrolled in a CCC during the 2015-2016 school year. 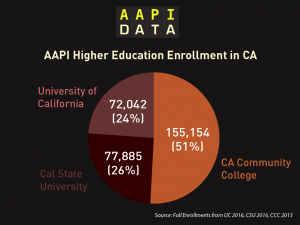 According to a 2015 report by The Campaign for College Opportunity, Asian American students have an average community college six-year completion rate of 60%, which is 13% above the 47% average completion rate for all students.  This 60% rate is driven in part by subgroups such as Indians, Vietnamese, and Chinese, which have completion rates 5 to 13 percentage points above the Asian average.  However, the 60% rate masks the 36% disparity between Chinese, who complete at a rate of 73%, and Laotians, who complete community college in six years at 37%. The overall rate also obscures the 39% six-year completion rate for Native Hawaiians and Pacific Islanders (NHPI), and, the 29% rate for Samoans.

In the fall of 2016, about 12% of students within the California State University system identified themselves as Asian American, and about 4% were Filipino, and 0.27% were Pacific Islander. There were about 77,885 AAPI students at CSU during the fall of 2016. 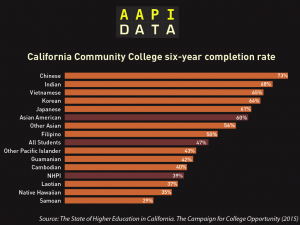 The University of California (UC) System

In contrast to six-year completion rates, UC admit rates vary significantly among various groups.  According to The Campaign for College Opportunity, the overall Asian American admit rate for the fall of 2014 was 72% – driven in part by subgroups such as Taiwanese, Sri Lankan, Chinese, and Korean which had admit rates ranging from 74-82%.  In contrast, the majority of AAPI subgroups had admit rates less than 72% – including Hmongs at 62%, Laotians at 52%, and some Pacific Islanders at 39%. 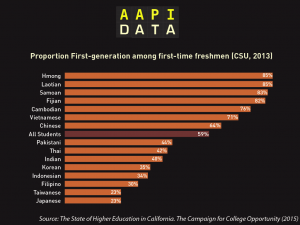 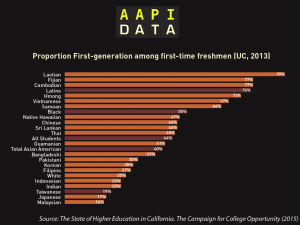 The wide range of outcomes can also be seen in the number of students at CSU and UC receiving Pell Grants. At CSU, about 52% of all AAPI receive Pell Grants; however, most AAPI groups – including Chinese, Korean, Pakistani, Cambodian, and Hmong have rates in excess of 52%, and in particular, over 90% of Hmong students receive Pell Grants. Likewise at UC, about 45% of AAPI freshmen received Pell Grants, and for many subgroups such as Vietnamese and Bangladeshi, about 60% were Pell Grant recipients.  In contrast, less than ¼ of Japanese American UC freshmen received a Pell Grant.

By disaggregating data, we can see that the AAPI community’s diversity defies an easy “averaging” of experiences. When general categories like “Asian American” are used, significant experiences of members of many AAPI communities are effectively erased, and thereby unaddressed. Thus, in order for California’s public colleges and universities to effectively meet their mission to educate all students of California, accurate data is essential so that racial and ethnic disparities can be addressed in a precise and streamlined manner.