One year ago, on March 16, 2021, a lone white gunman entered three spas in the Atlanta area and killed eight people—including six Asian American women, one white woman, one white man—and injured one Hispanic man. The Atlanta killings built on a backdrop of increased violence and hate incidents targeting Asian Americans, with findings from our survey last year indicating that about one in six Asian American adults had experienced hate incidents since the start of the pandemic.

New data on the anniversary of the Atlanta spa killings reveal that hate crimes against Asian Americans and Pacific Islanders (AAPIs) remain a serious issue. With 16 percent of Asian American adults and 14 percent of Native Hawaiians and Pacific Islander adults reporting a hate incident since the beginning of 2021, these proportions suggest that nearly 3 million AAPI adults have experienced a hate incident in a little over a year. 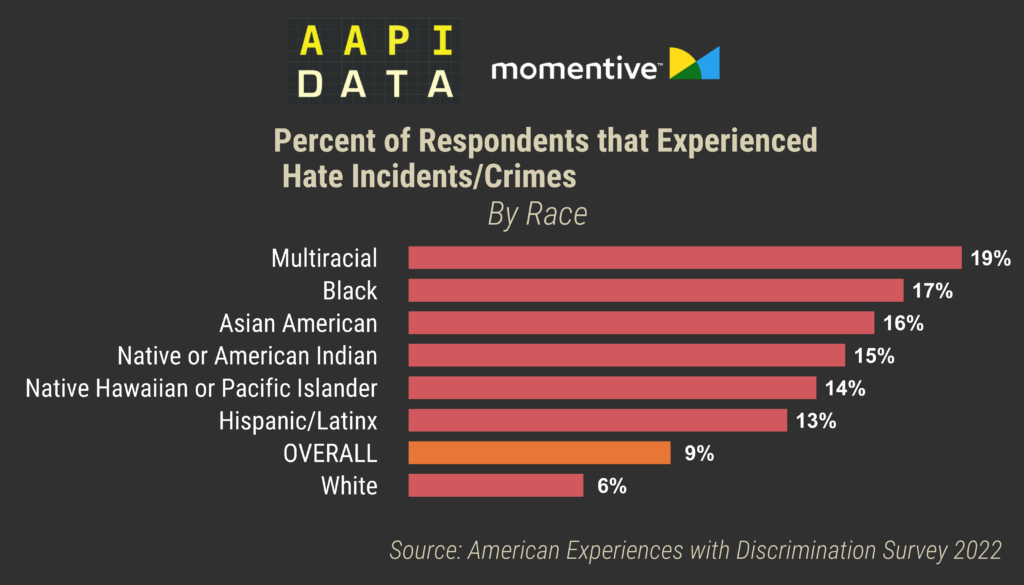 This pattern, consistent over the past two years, is different from data from community reporting websites showing twice as many incidents involving Asian American women than men. This suggests that Asian American women are more likely than Asian American men to file incident reports with community organizations. More generally, accounts of self-reported incidents fail to capture the full scale of anti-Asian hate incidents—thus, for example, the Stop AAPI Hate organization had logged about 11,000 hate incidents involving AAPIs as of December 2021, far short of the 3 million estimated incidents based on our survey findings.

Key findings about Asian Americans’ and Hawaiian/Pacific Islanders’ experiences with hate crimes and discrimination include the following:

The survey also provides insights into a range of experiences with racial discrimination and racial identity among AAPIs and other groups.

“We are grateful for the partnership with the leadership at Momentive,” said Karthick Ramakrishnan, founder of AAPI Data. “These data are much needed to inform our understanding of hate crimes, racial bias and racial discrimination in the United States,” he added.

“These trends help to add critical context and data to the ways in which hate crimes and more everyday experiences with racial discrimination affect all non-white groups in the country,” said Janelle Wong, AAPI Data’s co-director.

“These data provide new and essential context on the persistent impact of the tragic events of the past year,” says Jon Cohen, Chief Research Officer at Momentive. “Getting fresh insight into the incidences of hate crimes along with reports of day-to-day discrimination shine a spotlight on how AAPI individuals are thinking about and expressing their identities.”

The 2022 AAPI Data/Momentive survey results can be found in the blog sections of each organization’s web site: https://aapidata.com/blog/ and https://www.momentive.ai/en/blog/aapi-data-2022.

AAPI Data is a nationally recognized publisher of demographic data and policy research on Asian Americans and Pacific Islanders (AAPIs), with hundreds of news mentions in national and local outlets. AAPI Data’s reputation is built on data and research that is accurate, compelling, and timely. In addition to its news impact, AAPI Data is a trusted source among community organizations, government agencies, and decision makers seeking to better understand key aspects of AAPI communities.