Call to Action: 2020 Census and Data Equity for AAPIs

In 2019, AAPI Data noted that Census 2020 had a “Big Asian American Problem.” In particular, we were concerned about Asian Americans expressing the lowest levels of intent to fill out the Census form among the racial groups included in a survey on barriers to Census participation. Thanks to tireless outreach and mobilization on the part of Asian American and Pacific Islander (AAPI) community organizations, as well as dedicated outreach on the part of Census Bureau staff, the 2020 Census captured the tremendous growth of our respective populations. 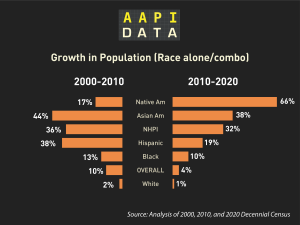 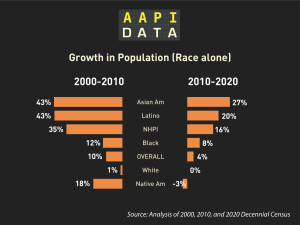 Powering the tremendous community outreach for a strong Census count was the importance of detailed ethnicity data, especially for smaller population groups like Cambodians, Burmese, Tongans, and Samoans. These data are critical to serve the needs of diverse groups within the AAPI umbrella. Census 2020 collected reportable data on more than 20 distinct Asian American national-origin groups and at least 8 Native Hawaiian and other Pacific Islander groups.  But these detailed data only help to advance equity in our community if they are released in a timely manner.

And therein lies one of the major problems with the release of 2020 Census data.

Unlike in the past, when the Census Bureau released data on detailed origin in the year or two following each decennial Census, we now face the prospect of having access to this data only in 2023 or 2024, years after the original data have been collected. These delays are particularly problematic for groups with rapidly growing populations, with outdated data compromising the effectiveness of government agencies, philanthropies, and community organizations serving these groups.

For decades, the collection of disaggregated data has been a civil rights issue for our community.  We need data on all of our Asian American and Pacific Islander groups to identify and address persistent disparities, including between larger Asian American groups, such as Chinese and Indians, and smaller groups, such as Vietnamese, Lao people, Native Hawaiians, and other Pacific Islanders.

Detailed ethnicity data are also essential to providing language services. For example, county hospitals need access to timely data on Chinese, Korean, Vietnamese, Hmong, and other groups in their community that have relatively low levels of English proficiency. In many smaller counties, decennial Census data is the only reliable source of accurate information about populations that might require language assistance.

There are several other areas of concern with respect to the release of detailed ethnicity data from the 2020 Census.

All of these issues seriously jeopardize the ability of community organizations to identify and meet the pressing social and economic needs of Asian Americans and Pacific Islanders.  To address these concerns, we are working with community partners on a national awareness-raising campaign, and to encourage the U.S. Census Bureau to take corrective action.

A sample letter for the Census Bureau’s current comment period (deadline December 18, 2021), with easy-to-understand guidance for our community partners can be found here: https://bit.ly/AAPI-dataequity