BY JANELLE WONG AND KARTHICK RAMAKRISHNAN


The Asian American community has seen an outpouring of concern and support since March 16, 2021, when a White gunman opened fire on three local businesses in Atlanta, killing eight people, including 6 Asian American women. The tragedy brought new attention to anti-Asian bias in the United States.  New survey data from a joint project of Survey Monkey and AAPI Data situates an uptick in discrimination reported by Asian Americans within the broader landscape of racism in the United States.

The survey results show similar rates of reported experience with hate incidents among different communities of color in 2021. The factors driving these incidents and wider range of experiences with racial discrimination captured by the survey, however, are likely distinct. Asian American exclusion from American life is often built on the perception that they are “perpetual foreigners,” representing Asian countries no matter how many generations they have lived in the United States. Latinos have also faced similar acts of othering and exclusion, with the presumption that they are undocumented immigrants even though a majority are born in the United States. By contrast, anti-Black prejudice is built on extremely pernicious stereotypes about violence and criminality, used to justify centuries of violent subjugation of Black lives from slavery, to Jim Crow, to modern-day segregation and incarceration.

Our survey data lend support to the notion that the drivers of racial exclusion operate differently for different communities. The myth of the “perpetual foreigner” remains strongly associated with Asian Americans.  This is reflected in horrific street crimes, including where bystanders look on. Systemic violence by police and those in authority remains a constant threat for Black people in the U.S., as the current trial of former police officer Derek Chauvin charged with killing George Floyd reminds us.  In that tragic case, the bystander included Tou Thao, an Asian American police officer who was later fired.  The disproportionate institutional racism faced by Black people in this country is also reflected in the survey data.

We asked directly about whether respondents had been questioned about their belonging in the the U.S. Fully 64 percent of Asian American survey respondents have been asked “where are you from, assuming you’re not from the U.S.,” and also are highly likely to have people act “as if you don’t speak English” (45%) and suggest that they “whiten” or “Americanize” their names (20%). The results are similarly high for Pacific Islanders and Latinos in the survey. 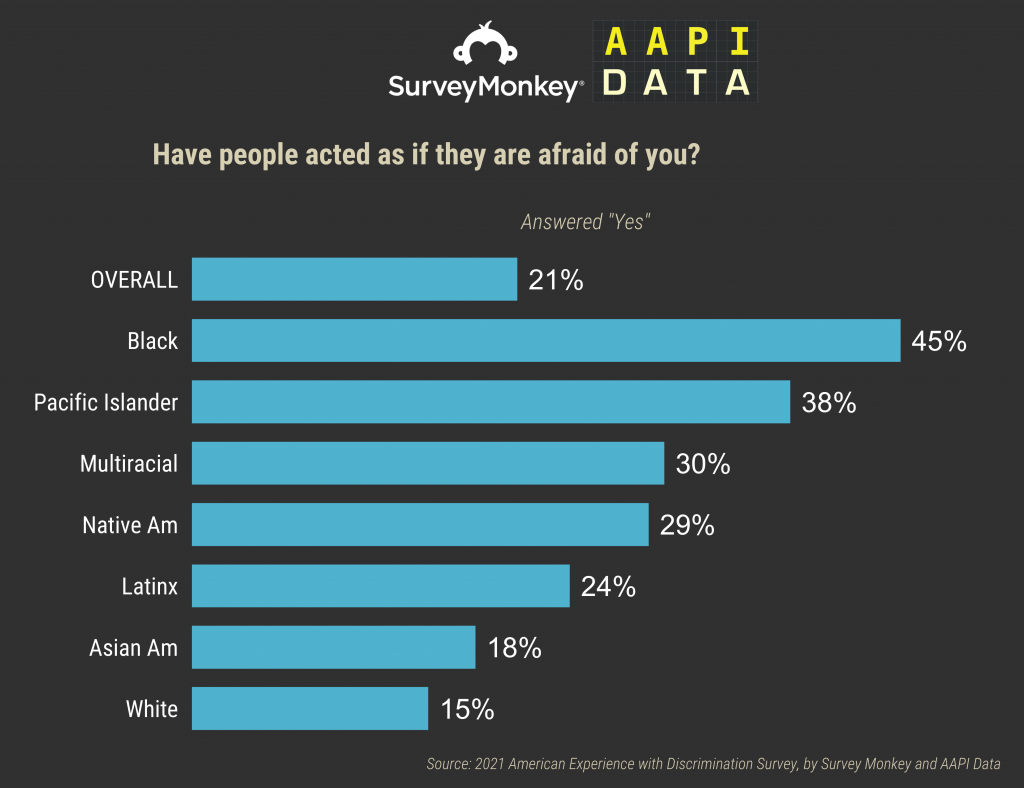 The data reveal other important differences in the form and levels of racial discrimination across different racial groups. The survey included an oversample of Asian Americans (1,831) as well as large samples of Native Hawaiian/ Pacific Islanders (186), Black (1,848), Latinos (1,278), and Native American Indians (265).

Respondents were asked “Have you ever been a victim of a hate crime? That is, have you ever had someone verbally or physically abuse you, or damage your property specifically because of your race or ethnicity?” 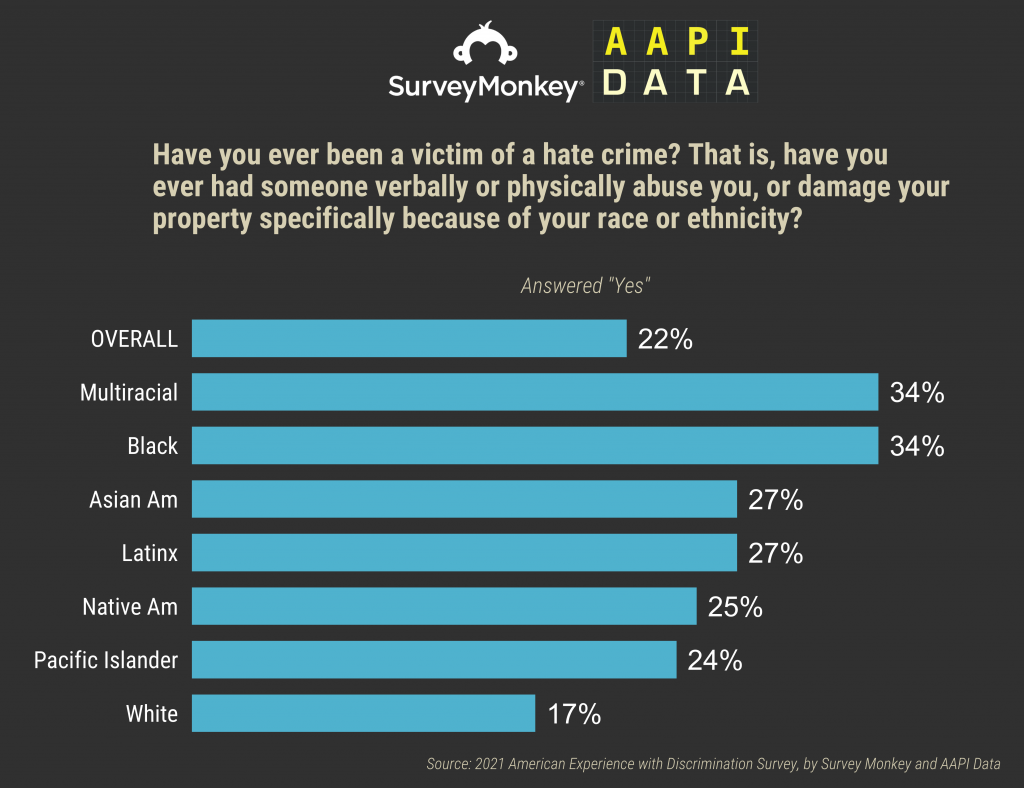 Black and Asian American respondents were the most likely to say they worried “all the time” or “often” about being the victims of a hate crime (31%), followed by Native Hawaiian/Pacific Islanders (24%), Latinos (19%), Native American Indians (16%), and whites (8%).

Racial discrimination and bias. While racism in the U.S. has common roots in white supremacy, the survey results show that racism occurs in multiple forms and is experienced in distinct ways among different racial groups. For example, when it comes to being “unfairly stopped, searched, questioned, physically threatened or abused by the police,” there are clear variations by race. Nearly 40% of Black respondents reported experience with police misconduct or physical abuse.  This compares with more than 25% of Latinos, Native Hawaiian/Pacific Islanders, and Native American Indians. In comparison, White (18%) and Asian American (14%) respondents were much less likely than their Black counterparts to report police misconduct or abuse. 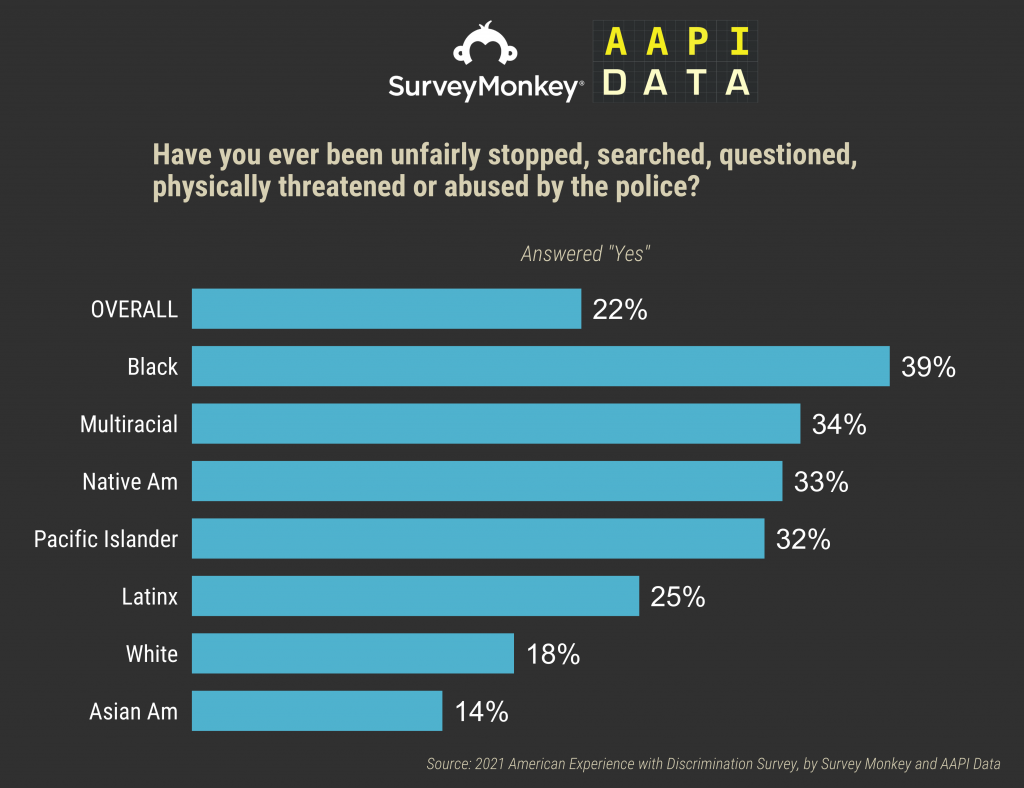 In addition, Black, Latinos, Native Hawaiian, and Native American Indian respondents were more likely than Asian Americans to report being unfairly denied a promotion, being unfairly fired, or being unfairly prevented from moving into a neighborhood because a landlord or real estate agent refused to sell to them.  For instance, 26% of Black, 25% of Native Hawaaiian/Pacific Islander, 20% of Native American Indian, and 17% of Latino respondents reported that they were unfairly prevented from moving into a neighborhood, compared to 10% of Asian American respondents. (7% of white respondents reported a similar experience). Black respondents were more likely to attribute discrimination to “race or ethnicity,” while Asian American, Latinos, and other non-white respondents mostly attributed these expriences to “race or ethnicity” or perceived immigrant status (ie “having an accent”). 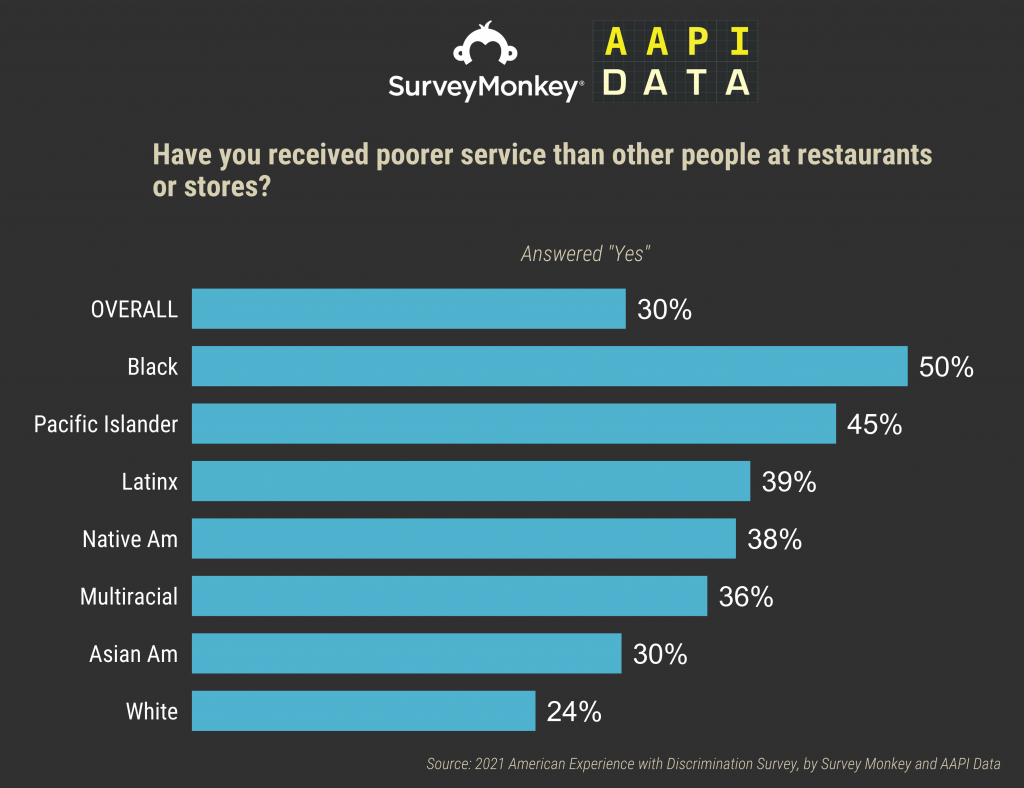 When it comes to education, Native Hawaiian/Pacific Islander (32%), Native American (24%), Black (23%), and Latino (17%) respondents were the most likely to report being “unfairly discouraged by a teacher or advisor from continuing your education.” About 12% of Asian American respondents reported such a conversation, compared with 32% of Native Hawaiian/Pacific Islander, 24% of Native American Indian, and 17% of Latino respondents.  13% of white respondents said they were unfairly discouraged from continuing their education.

Disparate treatment is a pervasive part of the day-to-day lives of many racial minority group members. For instance, Black respondents (50%) were more likely to report receiving poorer service in stores and restaurants than other people, compared to Native Hawaiian/Pacific Islanders (45%), Latinos (39%), Native American Indians (38%), Asian Americans (30%) and whites (24%).

These data illustrate that non-White groups in the United States experience racial discrimination in varied and prevalent forms. The study also makes it clear that Asian American experiences with racial discrimination are the manifestation of a much broader problem of racism, racial inequality and disparate racial treatment in the United States. All questions are available here with interactive toplines by race/ethnicity.

Methodology: This SurveyMonkey poll was conducted online March 18-25, 2021 among a total sample of 16,336 adults ages 18 and over, including 2,017 Asian or Asian Americans, Native Hawaiian or Pacific Islanders living in the United States. Respondents for these surveys were selected from more than two million people who take surveys on the SurveyMonkey platform each day.  SurveyMonkey used a third-party panel provider to obtain additional sample with quotas for Asian or Asian American and Native Hawaiian or Pacific Islander respondents. The modeled error estimate for the full sample is plus or minus 1.5 and for the following subgroups: Asian American or Pacific Islander +/-  3.5 percentage points. Data have been weighted for age, race, sex, education, citizenship status, and geography using the Census Bureau’s American Community Survey to reflect the demographic composition of the United States age 18 and over. An additional smoothing parameter for political party identification based on aggregates of SurveyMonkey research surveys is included.

The survey was conducted in English-only.  This limitation biases the sample toward Asian Americans who are U.S. born and dominant English-speakers. Importantly,  the majority of the Asian American sample reported speaking a language other than English in their homes.  Further, past studies, including the 2016 National Asian American Survey, show that U.S. born Asian Americans are more, not less, likely than their foreign-born counterparts to report experience with discrimination. As such, we can be fairly confident that the results above do not underrepresent reported experiences with discrimination.