At AAPI Data, we seek to contribute to this conversation on federal data standards by illustrating the importance of AAPI data disaggregation. We do so in a series of blog posts this week focusing on particular outcomes, continuing with language access. 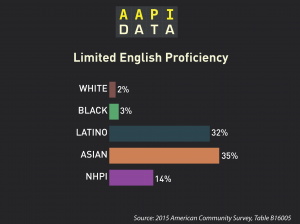 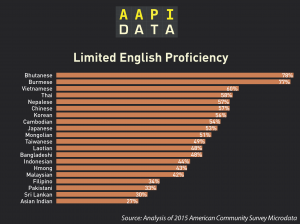 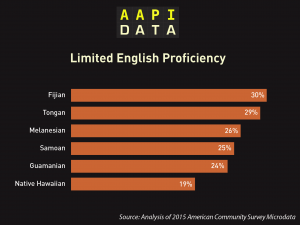 An important feature of Asian American and Pacific Islander, or AAPI, communities is their language diversity and variations in their levels of English proficiency across groups. English proficiency is important because it is significantly related to outcomes such as earnings, occupational mobility, quality of health care, and the ability to participate in civic and political life.

Given the sizable share of AAPI populations with limited English proficiency, language access at the ballot box is critical for civic participation and engagement. Section 203 of the Voting Rights Act requires that jurisdictions meeting the following requirements must provide language assistance during the voting process.

Section 203 provides: “The law covers those localities where there are more than 10,000 or over 5 percent of the total voting age citizens in a single political subdivision (usually a county, but a township or municipality in some states) who are members of a single minority language group, have depressed literacy rates, and do not speak English very well. Political subdivisions also may be covered through a separate determination for Indian Reservations.”

According to a 2016 report issued by Advancing Justice AAJC, National Association of Latino Elected and Appointed Officials (NALEO), and the Native American Rights Fund (NARF), a total of 264 political subdivisions nationwide are now covered by Section 203 which represents a 15% increase from the 2011. Still, only 26 jurisdictions today are required to provide some kind of Asian language support, although this is an increase from 21 jurisdictions in 2011.

For more research and data on this topic, please visit our Language Access page at AAPI Data.

For a more detailed discussion of the Language Diversity and English Proficiency, please visit our report with Center for American Progress.