At AAPI Data, we seek to contribute to this conversation on federal data standards by illustrating the importance of AAPI data disaggregation. We do so in a series of blog posts this week focusing on particular outcomes, continuing with education.

The model minority stereotype often frames AAPIs in terms of their high educational attainment and advanced degrees. This notion is misguided and is driven by an incomplete picture of AAPI educational attainment. Among AAPIs  there is substantial variation between groups. Just 1 in 4 Burmese in the United States have a Bachelor’s degree or higher compared to about 3 in 4 Taiwanese and Indian Americans. On the other end of the education scale, nearly 62% of Bhutanese and 50% of Burmese in the United States lack a high school degree, outcomes that are worse than African Americans and Latinos. 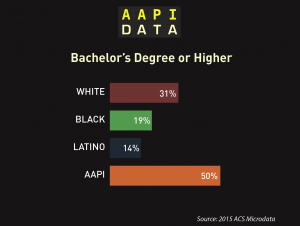 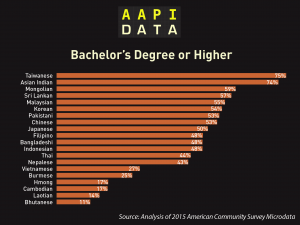 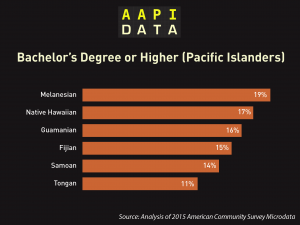 Without access to disaggregated data, institutions and researchers will not be able to properly identify groups that are marginalized and underrepresented in higher education. Recently, states such as Oregon, Minnesota, and Washington have taken steps to collect and report disaggregated data to match census reporting categories. In California, the University of California and California State University systems have committed to releasing disaggregated education data, even though attempts to include education in a state data disaggregation bill stalled in 2016.

For those interested in more detail about AAPI educational attainment please scroll below to find more estimates by race and detailed origin. The tables and graphs are based on the 2011-2015 ACS Public Use Microdata Sample which is available in CSV form here. Interested users can also download this data from IPUMS from the University of Minnesota.

Center for American Progress & AAPI Data collaborated on a series of reports on AAPIs, including one on Education, you can find the consolidated report here.

For more research and data on this topic, please visit our Education page at AAPI Data.