BY HOWARD SHIH AND KARTHICK RAMAKRISHNAN

Today, the U.S. Census Bureau released findings from its Post Enumeration Survey (PES) that gives the first major evidence of the quality of the 2020 Census as it relates to the country’s major race and ethnic groups. Overall, the data indicate significant and worrying levels of undercounting among Black, American Indian / Alaska Native, and Hispanic/Latino populations. The same was not true for Asian Americans or Native Hawaiian and other Pacific Islanders (NHPIs).

This relatively positive outcome is remarkable, given that the U.S. Census Bureau’s own surveys prior to the 2020 count indicated that Asian Americans were among those least likely to be familiar with the Census and the least likely to say that they would fill out the Census form. This remarkable improvement is likely attributable to the high level of engagement by AAPI community-based organizations in raising awareness, combating misinformation, and encouraging participation in the 2020 Census.

The Post-Enumeration Survey is a sample survey conducted independently from the 2020 Census. People in the survey were matched back to the 2020 Census records to see if they were missed or counted in the wrong place or at multiple times. The PES only collected information from households. Group quarters and remote Alaska areas were not included as part of the PES.

The Census Bureau estimates that Asian Americans were overcounted by 2.62 percent in 2020. While the estimate for Native Hawaiian and Pacific Islanders indicates a slight overcount of 1.28 percent during the 2020 Census, the margins of error indicate that this estimate was not statistically significant, or different from an estimate of zero overcount.

Overcounted individuals were individuals who were counted in multiple locations, like college students being counted at their parents’ homes rather than at school, families with multiple homes, children with shared custody, or households that moved during the decennial count. A similar post-enumeration survey for the 2010 Census revealed essentially no overcount or undercount for both groups, with net coverage rates of 0 percent and -1.02  percent for Asian Americans and Native Hawaiians and Pacific Islanders, respectively, though neither measure was statistically significant from zero. Positive net coverage rates indicate a net overcount and negative net coverage rates indicate a net undercount. 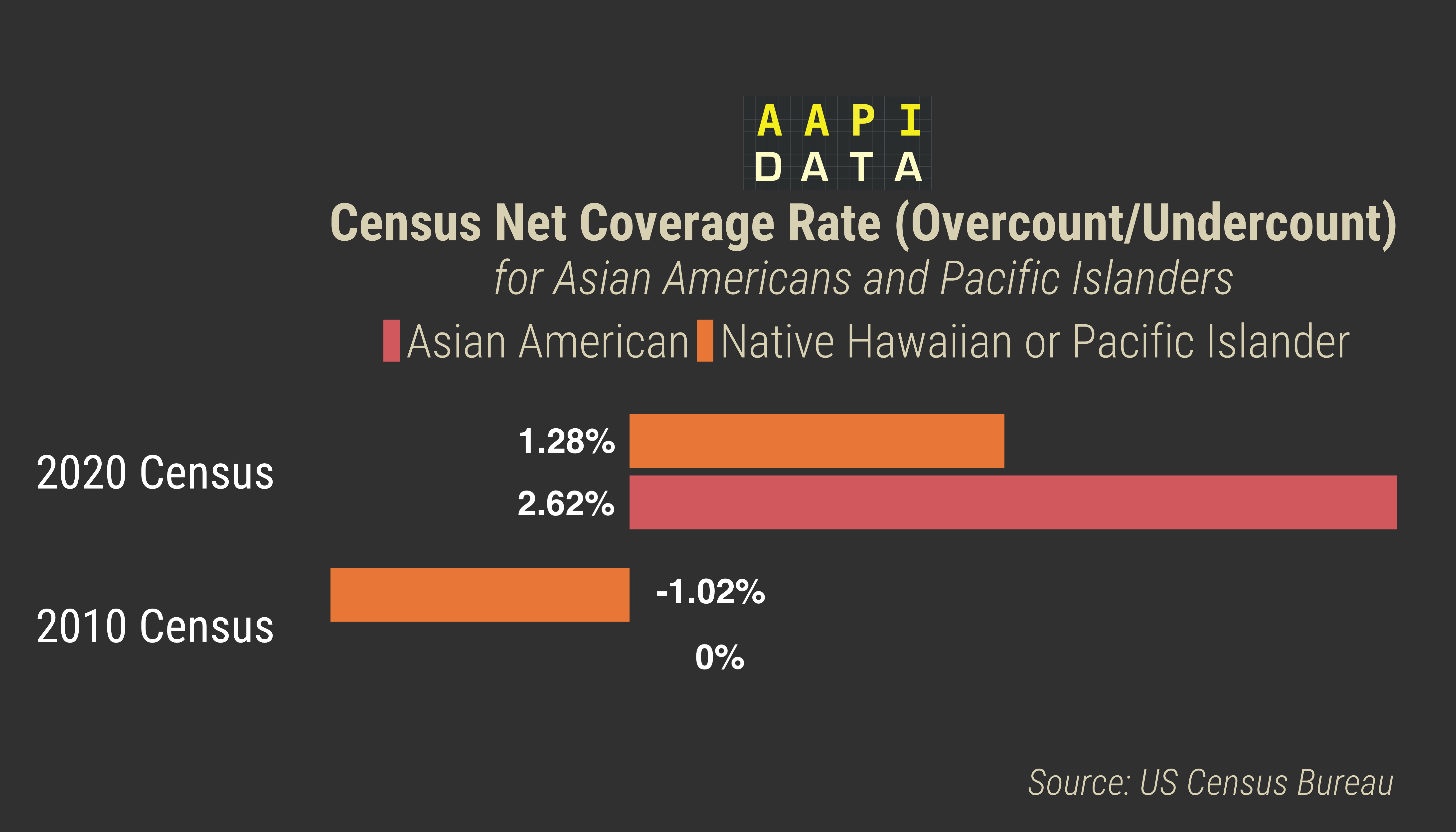 Even though net coverage rates for AANHPI communities indicated no net undercount, we know from previous censuses and other government surveys that there are significant differences between the members of our community who are overcounted and those who are undercounted. With the examples above, we see that those who are most likely to be overcounted tend to be more economically advantaged, while those who are most likely to be undercounted include economically disadvantaged groups, such as recent immigrants, low-income families, young children, and refugees. While the two types of errors in the Census balance each other out for AANHPIs, the biases in who is overcounted and who is undercounted impacts the underlying disaggregated data. This is another case where aggregated data for AANHPI communities ends up hiding a significant issue, in this case, the challenges of outreach to specific ethnic groups or geographic areas within AANHPI populations.

We credit the extensive outreach by community organizations—conducted in-language and through culturally competent and culturally resonant methods—for encouraging and enabling our communities to fully participate in the Census. The Census Bureau has data processing methods that can correct for overcounts, but omissions cannot be corrected. Ensuring all members of our communities are represented in the decennial census remains the ultimate goal. 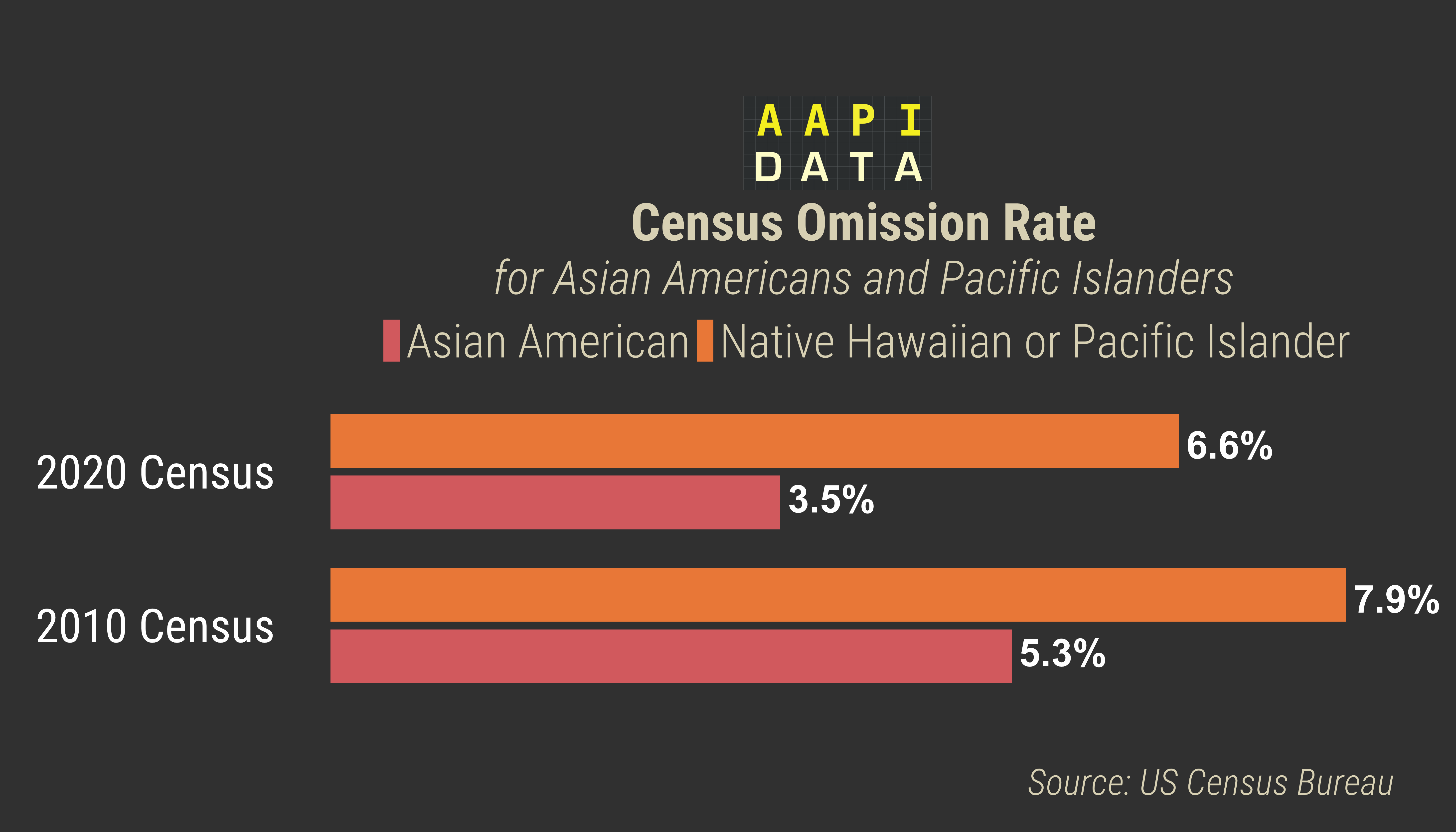 The Census Post-Enumeration Survey results released today do not provide breakdowns for racial groups by detailed origin (such as Filipino, Hmong, Native Hawaiian, and Tongan), nor do they do so by race and other important factors such as age and homeownership.

We at AAPI Data will continue to monitor future releases of 2020 Census coverage and quality. We also look forward to helping our community learn from the most recent decennial census to ensure our communities are fully counted in 2030.