In the early hours of Sunday, June 12, the United States witnessed its deadliest mass shooting to date, as an assailant used a handgun and a semiautomatic assault rifle to target a gay nightclub, leaving 50 dead and at least 53 injured.

Asian Americans, by contrast, are very strong supporters of stricter gun laws. Until recently, there was no survey data of Asian American voters with respect to gun control. Surveys by mainstream news organizations are not conducted in Asian languages, and they typically do not have sample sizes large enough to report on Asian Americans.

Now, however, we have data points from two different surveys of Asian American registered voters—and they indicate strong support for stricter gun laws in the United States. These surveys are collaborations between APIAVote, Asian Americans Advancing Justice|AAJC, and AAPI Data. 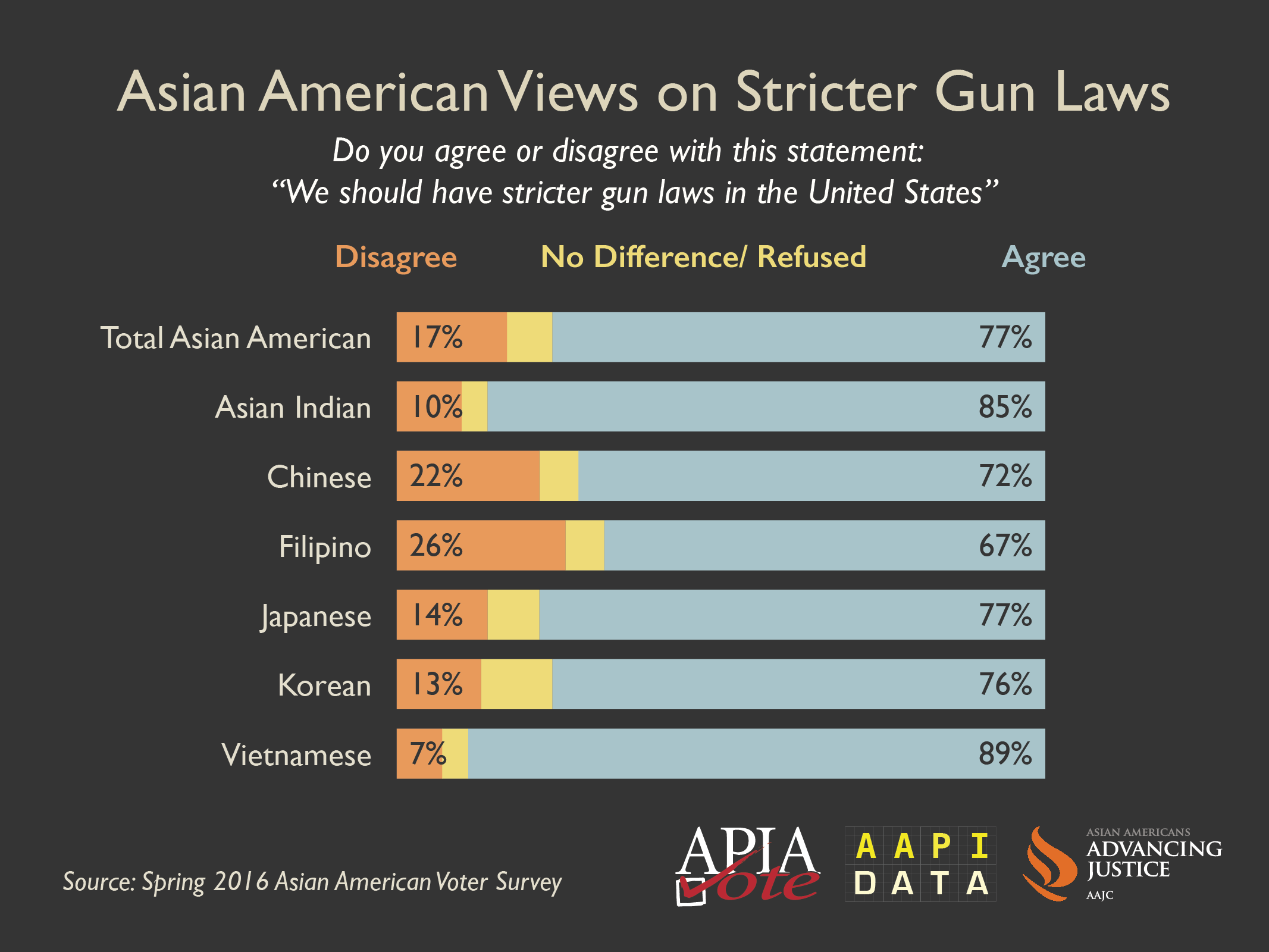 First, gun control is a high priority issue for Asian Americans. Respondents were asked “Now I’d like to ask you about some issues that might be important in the elections in November. Please tell me how important the following issues are to you personally in deciding how to vote.” They were then given a choice of “extremely important, very important, somewhat important, or not that important.”

Next, asking specifically about their position on gun control, respondents were asked the extent to which they agreed or disagreed with the statement: “We should have stricter gun laws in the United States.”  Overall, a high proportion of Asian American registered voters support stricter gun laws (77% in Spring 2016), and support is strong across the board, ranging from 67% among Filipino Americans to 89% among Vietnamese Americans. Support for stricter gun laws is especially high among older voters (83%) and among naturalized citizens (82%).

These results are similar to those we found in Fall 2014, when 80% of Asian American registered voters supported stricter gun laws (notably, the difference between 2014 and 2016 is within each survey’s margin of error of +/- 3%). Furthermore, each of these surveys were conducting outside of the immediate aftermath of mass shootings.

Given the especially horrific nature of the Orlando shootings and its occurrence during an election year, we might expect the importance of gun control to grow in importance for Asian American voters in the months ahead.

We will have more to say about the Spring 2016 Asian American Voter Survey (AAVS) in the months ahead. Stay tuned by following us on Twitter: @APIAVote, @AAAJ_AAJC and @AAPIData