The origin of the term “Asian American” is undoubtedly political, borne out of racial justice organizing at college campuses in the 1960s. Since then, the term has grown in use, but its meaning and definition remain a subject of debate and even confusion.

Observers have noted the vast heterogeneity and diversity encompassed by the category, including dozens of languages, national origins, and cultures. Most recently, questions around the meaning of “Asian American” have become mainstream, as Americans of Asian descent have been thrust uncomfortably into the national spotlight by a two-year spate of anti-Asian violence. Is “Asian American” “flattening,” standing only for certain, highly visible subgroups (i.e., those of East Asian descent), while erasing others? Can it capture both the complexity of Asian American experiences and the things those experiences have in common? Or is it merely a “demographic descriptor”?

The 2016 National Asian American Survey (NAAS) allows us to understand this identity category through survey data. This survey, conducted with large samples of 10 Asian American subgroups, asked respondents a series of questions about what they believed Asian Americans share in common and their racial and ethnic identities.

“What, if anything, do Asians in the United States share with one another?” 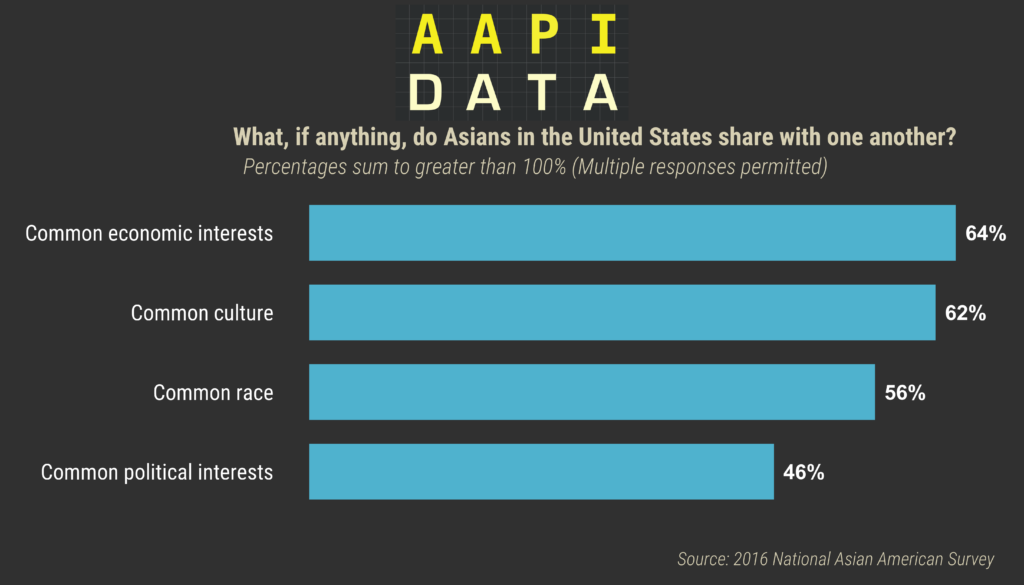 How do people of Asian descent in the U.S. describe themselves?

The survey also asked how respondents generally thought of themselves when provided a set of identity labels: “Asian American”, “Asian”, “American”, or by an ethnic label, “[Ethnic]” or “[Ethnic] American” (e.g., “Vietnamese” or “Vietnamese American”).

As Figure 3 shows, the majority of respondents thought of themselves in terms of a national-origin group (49% as [Ethnic] American and 15 % as [Ethnic]), rather than with the pan-ethnic term Asian American (16%).

Figure 3: Responses to, “In general, do you think of yourself as…” 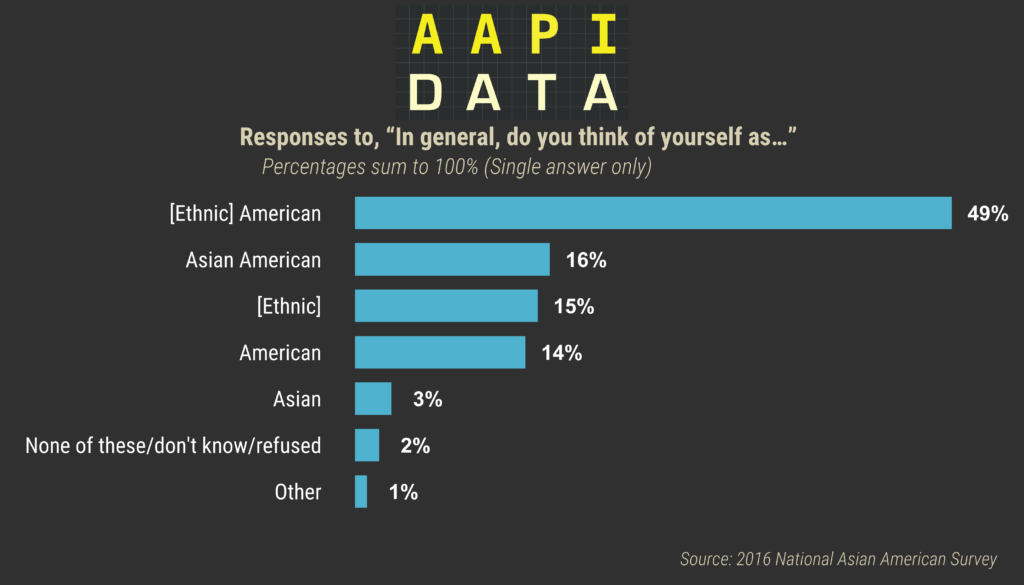 Notably, there were significant differences across national origin groups in terms of the likelihood of thinking of oneself as “Asian American,” even when accounting for differences in education. About 20 percent of Chinese Americans thought of themselves as Asian American; only those of Pakistani and Cambodian descent were as likely to think of themselves as Asian American while all other groups were significantly less likely to. In contrast, compared to those of Chinese descent, those of Vietnamese, Korean, Bangladeshi, and Hmong descent were all significantly more likely to think of themselves in term of their ethnic group.

Table 1: Proportions of respondents who thought of themselves as “Asian Americans” vs. “[Ethnic] Americans”, by national origin.

How important are different identities to how people think about themselves?

Respondents were also asked “How important is being Asian to your identity?”

Figure 5: The importance of Asian and [ethnic] identity to respondents. 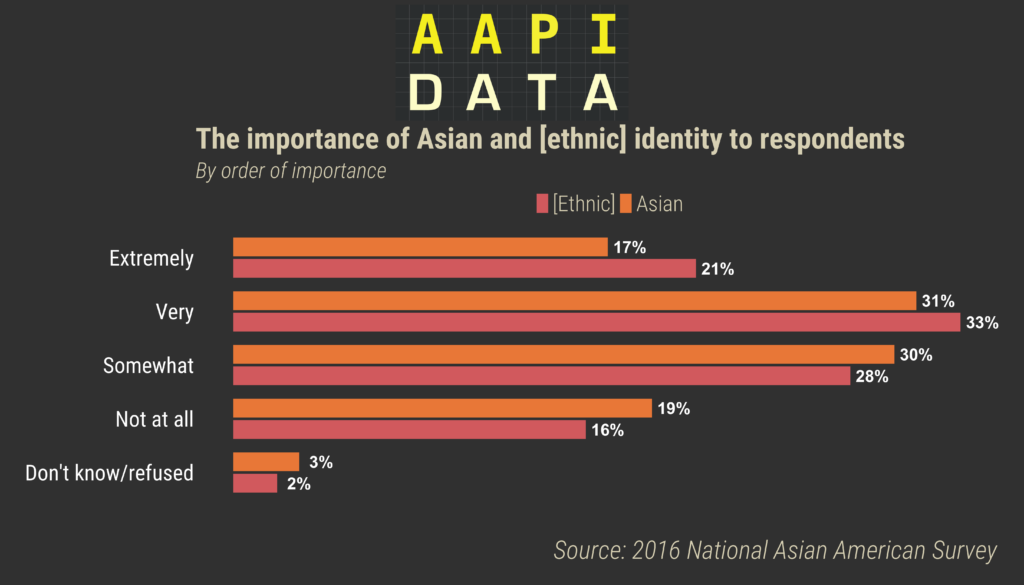 After accounting statistically for demographic variables and ethnic identity, my analysis revealed that those with lower incomes and less education were more likely to say that their Asian identity was very or extremely important.  For example, among Vietnamese respondents in the sample, 58% of those with a high school degree or lower said that Asian identity was “very” or “extremely” important, compared to 51% of those with a college or graduate degree.

Across national-origin groups, the importance of ethnic identity generally tracked with the importance of Asian identity, and for most, ethnic identity slightly outweighed Asian identity. Those of Korean and Cambodian descent are the two exceptions (see Table 2). Moreover, income and education were also inversely associated with thinking being [ethnic] was “very” and “extremely” important, suggesting that these two identities are not in opposition to each other.

Table 2: Proportions of respondents for whom Asian and [ethnic] identity is very or extremely important, by national origin.

It is true, by virtue of the race-making power of the Census and the state, that “Asian American” serves as a demographic label often imposed upon people. It is also true that “Asian American” has real meaning for many who fall under the category – that is, they see commonalities with others who share the identity.  This analysis makes clear that Asian Americans can hold both pan-ethnic and ethnic-specific identities and attribute importance to both simultaneously.

Tiffany J. Huang, PhD is a sociologist of race and immigration. She is a Provost’s Postdoctoral Fellow at the University of Pennsylvania.