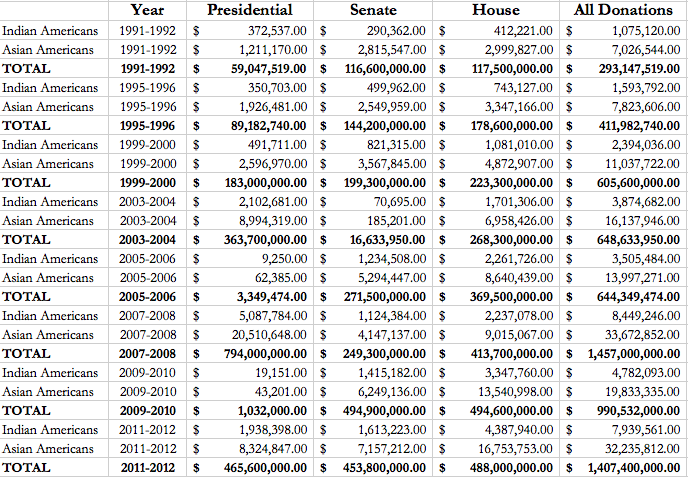 In order to analyze individual campaign contributions and estimate totals for minority groups like Asian Americans, and detailed origin groups like Indian Americans, the following tables were analyzed from the Detailed Files available from the Federal Election Commission for each year (descriptions from FEC):

These tables were put in a SQL database and queried to run the analysis in the Monkey Cage post. Individual contribution records were identified by one and where possible, two fields that indicated that the contributor was an individual (as opposed to an organization or another committee) and, the record was a contribution to a political committee. In order to establish a standard by which to evaluate contribution totals, I only looked at contributions by individuals to principal or authorized campaign committees for Presidential, Senate, and House campaigns. These committees were designated as being either the principal campaign committee of a candidate in the Candidate Master List, or as an authorized committee in the Committee Master Lists. Both designations indicate that the candidate has authorized in writing that the committee can receive contributions and make expenditures on his or her behalf.[i] These committees were then subset based on level of office to get estimates for presidential, Senate, and House contribution amounts.

Because of these differences, it is unlikely that the estimates reported here will match other figures from places like OpenSecrets, or even the FEC’s own website. Certain broader trends, however can be see across these sources. For instance, many will notice that the contribution totals for Asian Americans and Indian Americans actually decrease in 2012 compared to 2008. Looking to the FEC summary on presidential campaign finance, we can see that they too, report decreases in the total amount of individual contributions in 2012 compared to 2008.[ii] Similarly, Open Secrets also reports a decrease in the total amount of money spent in 2012 compared to 2008. [iii] This is likely due to the fact that Obama ran as an incumbent in 2012 and did not face competition during the primary season from someone like Hillary Clinton in 2008.

Identifying the race or ethnicity of individual contributions is not a simple process. While the FEC does require individual contributions to be reported with accompanying information like the name of the contributor, their address, and who they contributed to; this information does not include the race or ethnicity of the contributor. In order to estimate totals for minority groups, the surnames of individual contributors were parsed and analyzed via surname analysis using two different name lists. The last names were first matched against the 2000 Census surname list which contains all last names occurring 100 or more times in the 2000 Census. The complete list includes over 150,000 names.[iv] After the first round of matching, the names that were classified as Asian American were matched against another list to determine detailed ethnic origin.[v]

Surname analysis has been widely used in academia for a variety of applications including healthcare research, and analysis of voter turnout.[vi] Surname analysis has also been used in other settings like the Consumer Finance Protection Bureau to help conduct fair lending analysis of non-mortgage credit products. This analysis just scratches the surface of the types of ways scholars can analyze individual contribution data. Future work will aim to dig deeper into the ways individual donors can contribute money, as well as how other minority groups differ in their contribution behavior.