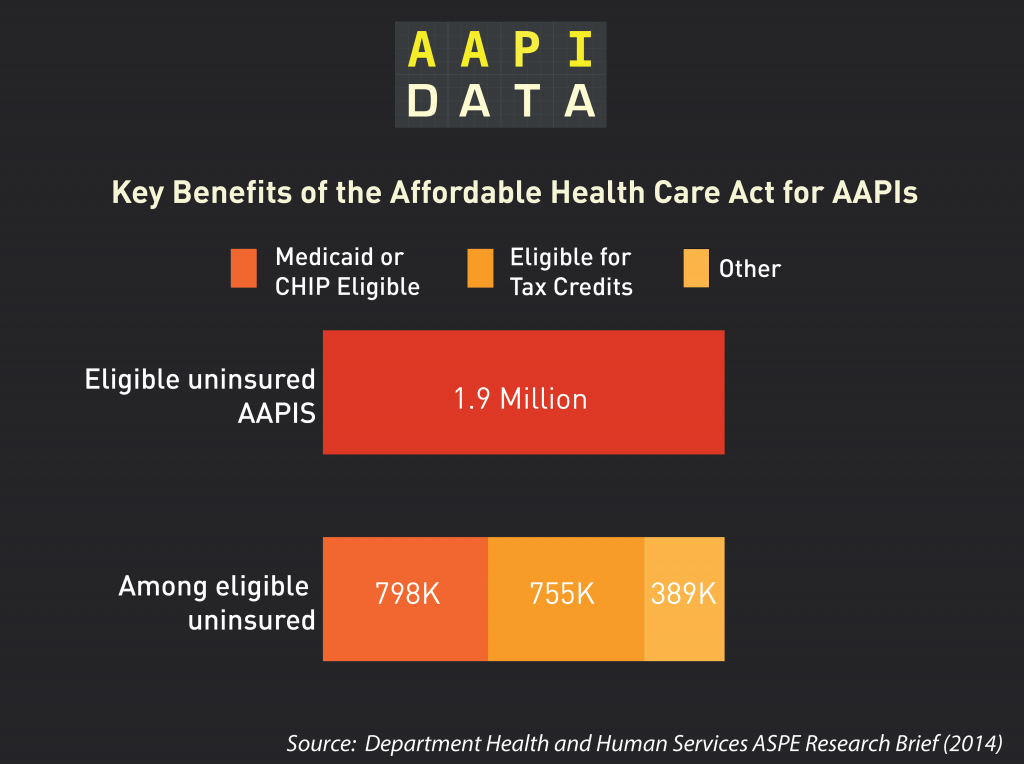 With today’s vote in the House of Representatives to repeal and replace parts of the Affordable Care Act (ACA), we wanted to take a closer look at how the ACA has helped AAPIs in terms of health insurance coverage. According to a 2014 research brief by the Department of Health & Human Services:

Under the Affordable Care Act, over 1.9 million eligible uninsured Asian Americans, Native Hawaiians, and Pacific Islanders (AANHPIs) gained access to new options for health care coverage starting in January 1, 2014. Eight in ten, or 1.6 million, of these eligible uninsured AANHPIs may qualify for either tax credits to purchase coverage in the Health Insurance Marketplace, or for Medicaid or the Children’s Health Insurance Program.

The 1.9 million AAPIs represent about 5% of the estimated 41.3 million eligible uninsured population in the United States (HHS Brief). Legislation to repeal and replace the ACA will likely make Health Care policy at the state level more consequential with regards to preserving expanded eligibility. Approximately 1.2 Million or about 62% of the AAPI eligible uninsured population reside in just five states: California, Texas, New York, Florida, and New Jersey (see Table 3 in HHS Brief for all states). While some states like California have signaled they will try to protect the gains in coverage should the ACA be replaced, others have not.

Changes in rates of uninsured AAPIs 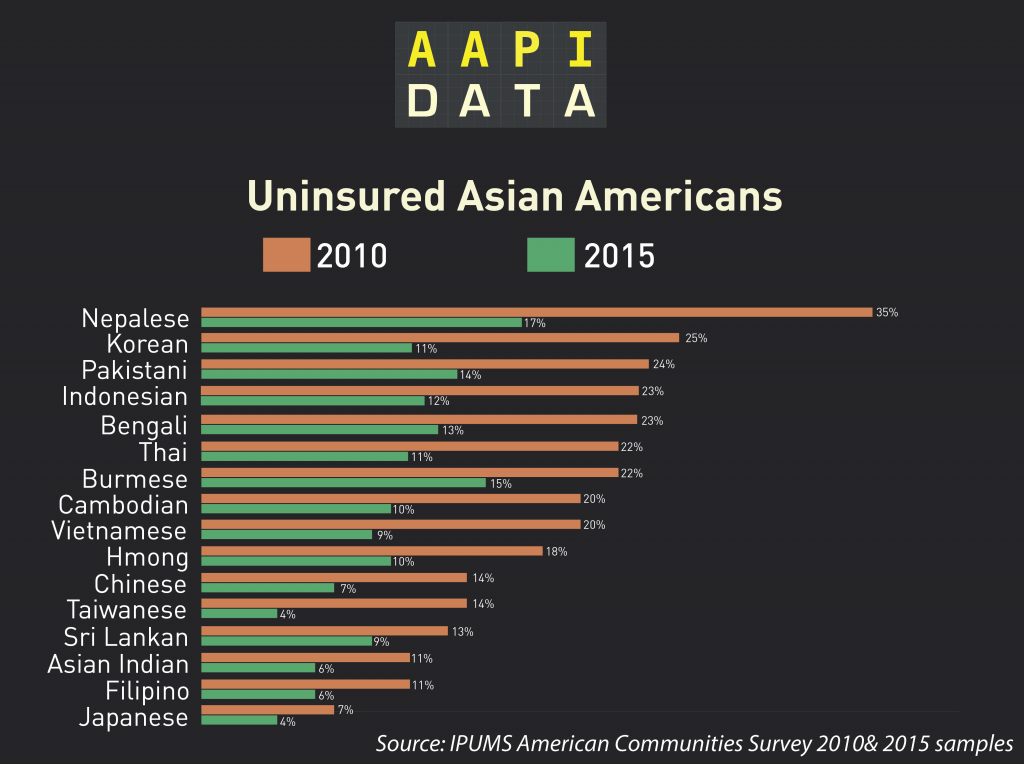 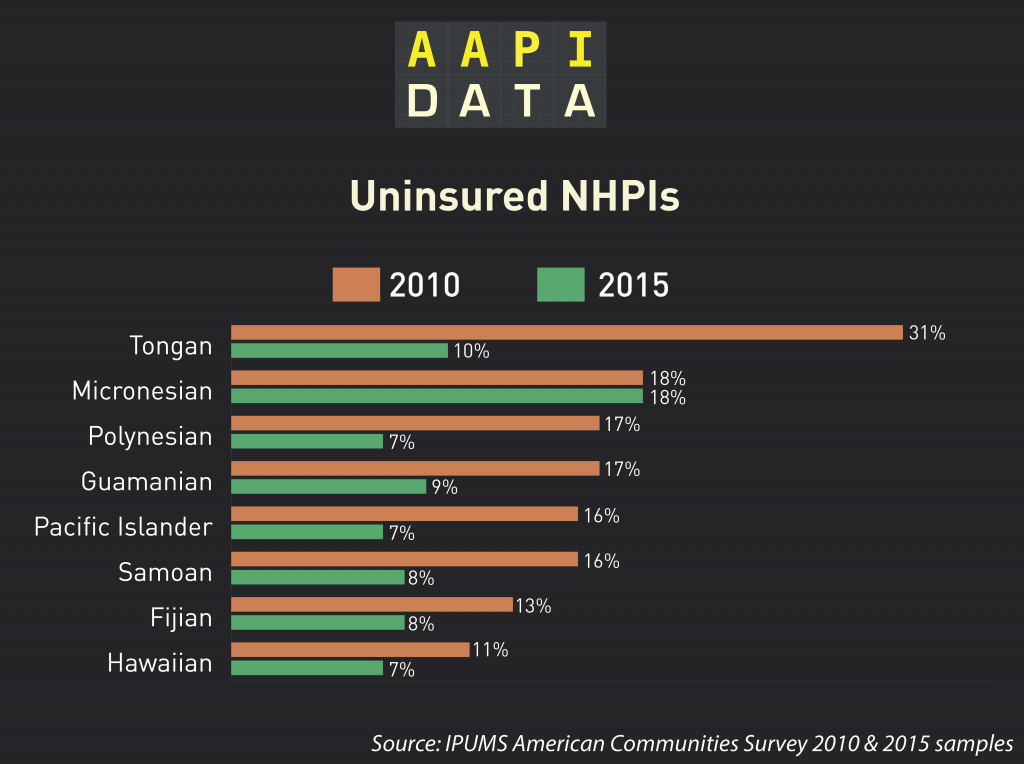 Comparing rates of uninsured AAPIs in 2010 and 2015 we can see that across nearly all detailed origin groups, the percentage of AAPIs without health insurance have dropped considerably. Tongan and Nepalese Americans see the largest differences with 20% and 18% fewer uninsured in 2015 compared to 2010.

Changes to the ACA could place these gains in jeopardy and it will fall to states to ensure that the estimated 1.9 million AAPIs remain eligible for health care. The likelihood that the American Health Care Act (AHCA), the Republican plan to replace the ACA will preserve these gains seems slim given the CBO’s estimate that some 14 million people could lose coverage by 2018 and up to 21 million in 2020. In fact, recent research by Amy Finkelstein, Nathaniel Hendren, and Mark Shepard suggest that the CBO’s analysis might actually underestimate these losses in their analysis of Massachusetts’ subsidized insurance exchange. 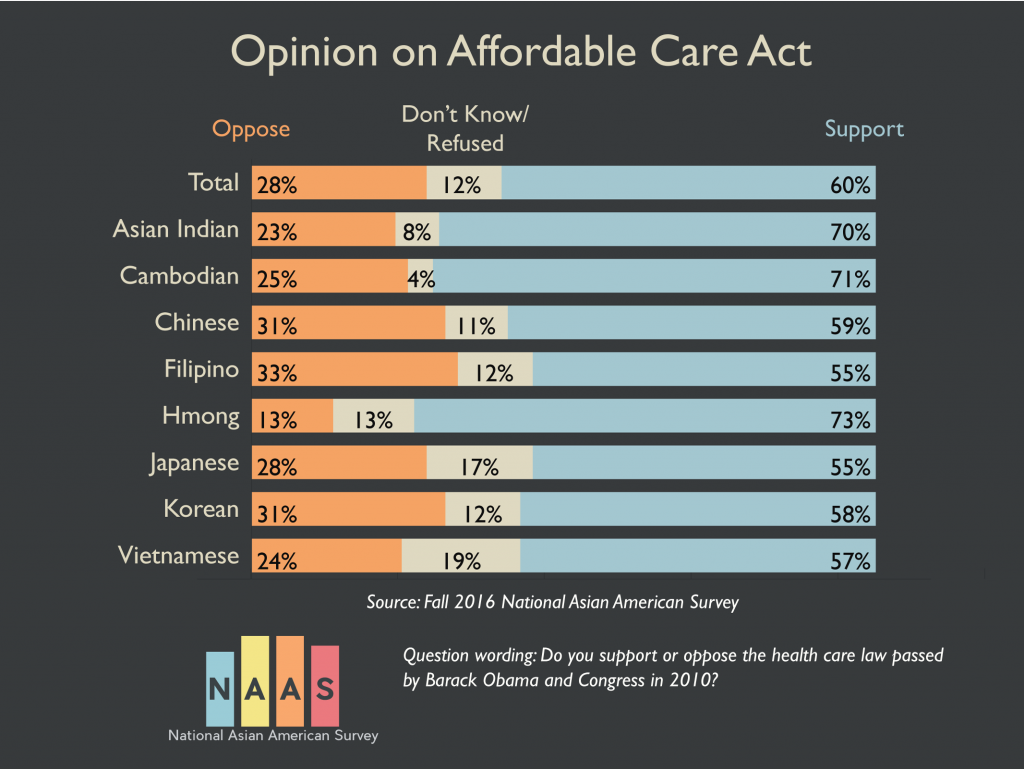 The Affordable Care Act, has enjoyed strong support across all Asian American groups with Hmong (73%), Cambodians (71%), and Asian Indians (70%) reporting at the highest rates. A report on the 2016 NAAS finds this support extends across demographic characteristics as well: