New findings from a study of California’s diverse Asian American Pacific Islander (AAPI) population reveals that while little attention has been paid to the economic vulnerabilities of this population, nearly one-out-of-four (23%) of AAPI Californians report working and struggling with poverty.  And those working and struggling with poverty are much more likely to report negative workplace experiences such as experiencing racial discrimination in the workplace than other AAPI Californians. While groups like Native Hawaiian and Pacific Islanders and Hmong are hit the hardest by economic inequality, a significant proportion of all groups in the AAPI population experience financial struggle. 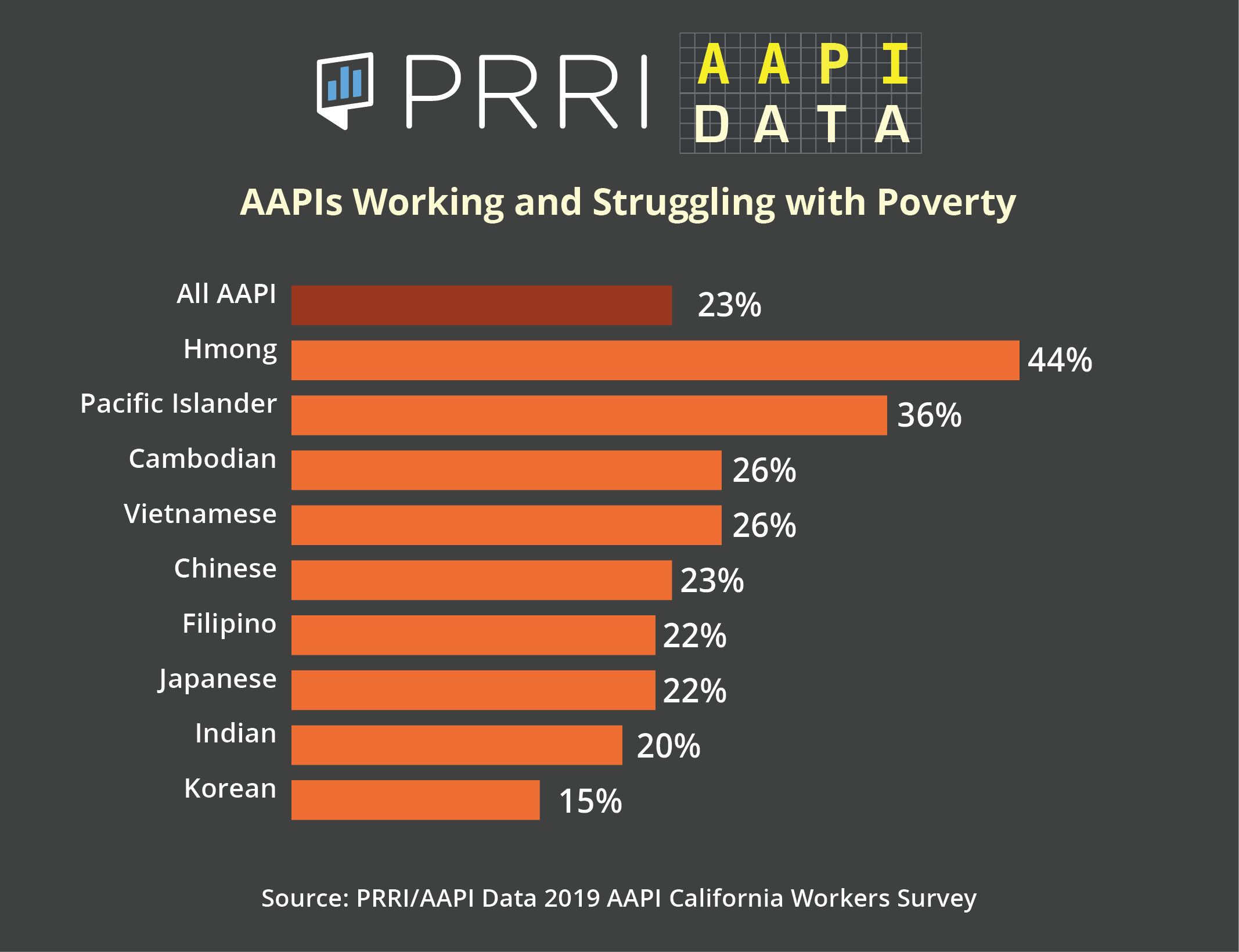 The study—conducted in partnership by AAPI Data and PRRI—includes Chinese, Indian, Filipino, Vietnamese, Korean, Japanese, Hmong, Cambodian, and Native Hawaiian and Pacific Islander samples and was conducted in six Asian languages and English.

Group variation in the degree to which workers struggle with poverty and economic hardship is tied to the very different histories of AAPI groups in terms of war, migration, and colonization. Although the early history of all AAPI groups is one of exclusion and discrimination, since the 1990s, especially, immigrants from China (including Taiwan), India, South Korea, and Japan are much more likely to migrate to the United States as part of high-skilled labor recruitment (H1B and other professional-skills visas) than immigrants from other parts of the world. By contrast, the growth of Vietnamese, Hmong, and Cambodian American communities in the U.S. is largely the product of U.S. wars in Southeast Asia and U.S. refugee policies. Colonial, territorial, and military expansion have played the most prominent role in Native Hawaiian and Pacific Islander communities, including a negative impact on economic security.

Notably, the belief that higher education is a “smart investment” in the future falls largely along these lines. Those groups that have benefited from U.S. immigration policies that target highly educated workers are, not surprisingly, the most likely to hold this view—Indians (81%), Chinese (79%), Koreans (79%). Smaller majorities of Cambodians (68%), Japanese (61%), Hmong (59%), and Native Hawaiian and Pacific Islanders (54%) also agree.

That beliefs about higher education as a good investment vary across AAPI groups in California suggests that this investment is largely a function of U.S. immigration policies, not the “cultural values” so often assumed by the “model minority” stereotype.

At the same time, the study shows that even those groups that have benefited most from selective immigrant recruitment (resulting in what sociologists Min Zhou, Jennifer Lee, and others call “hyperselectivity”), such as Chinese and Indians, still include large swaths of struggling workers. Because groups like Chinese, Filipinos, and Indians make up the vast majority of the AAPI population in California, these groups also comprise the largest proportion of California AAPIs who are working and struggling with poverty. Chinese make-up almost a third of the AAPI working and struggling with poverty population (29%), followed by Filipinos (25%), Indians (13%) and Vietnamese (12%). 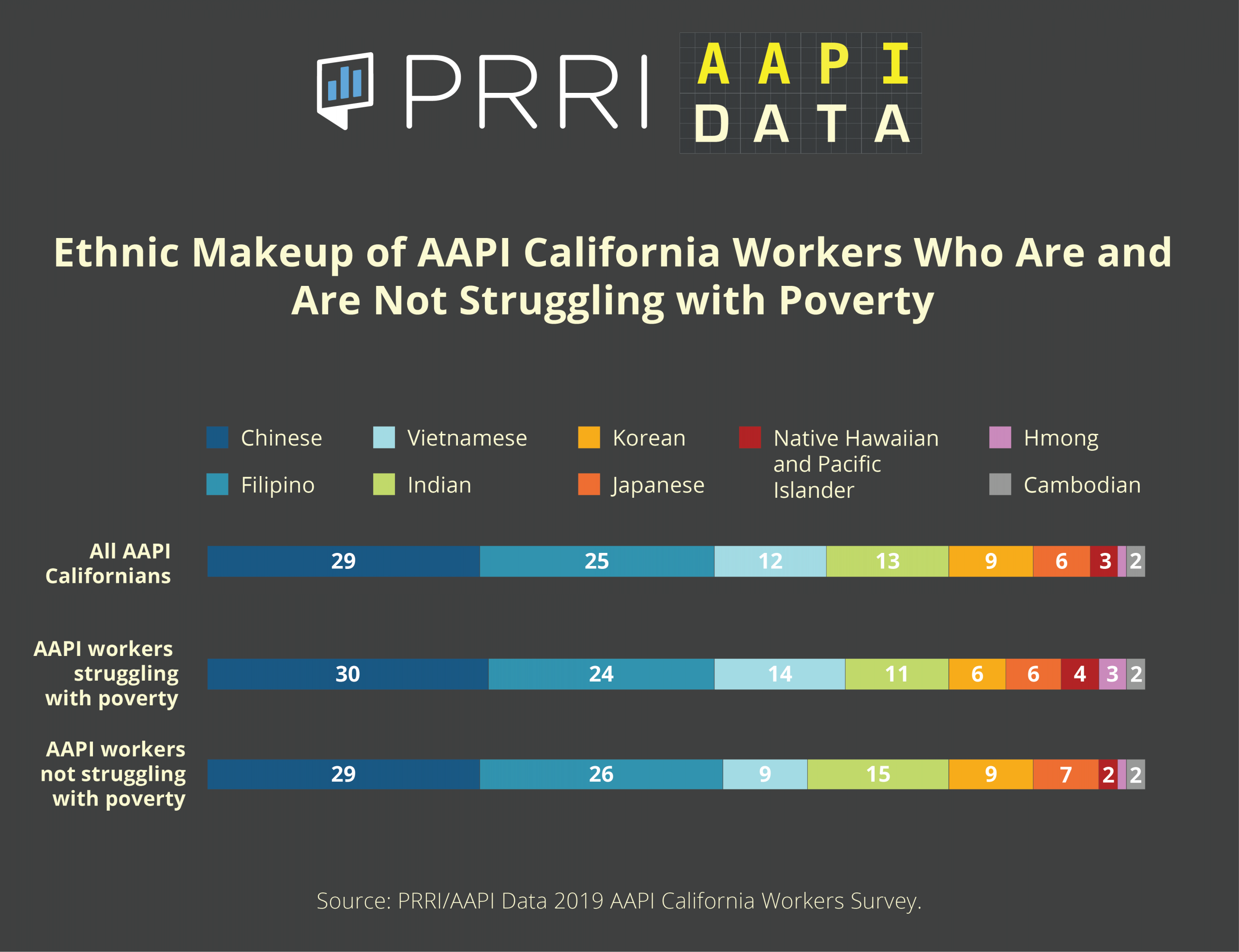 Overall, AAPIs in California are less likely to be working and struggling than Californians as a whole (23% vs. 31%). Yet, the study shows that most AAPIs reject the idea that “hard work and determination alone” guarantee success. A majority (55%) of AAPIs say that hard work and determination are no guarantee of success. Furthermore, this skepticism about individual effort and the “pull yourself up by your bootstraps” narrative is more pronounced among U.S.-born (65%) than the foreign-born (50%) AAPIs.  The bottom line is that even those who report high levels of economic security remain skeptical about individual effort and whether it guarantees economic advancement.

The Working Lives and Struggles of Asian Americans and Pacific Islanders in California report shows that economic fragility in California extends even to groups like AAPIs that possess, on average, the highest overall levels of education and income of any racial group in the state. It is more important than ever to formulate policies and make philanthropic investments that address the challenges of AAPIs who are working and struggling with poverty.