BY JENNIFER LEE and KARTHICK RAMAKRISHNAN

Note: This blog post is the second in a series based on the 2020 Asian American Voter Survey

After nearly a quarter of a century, a new generation of voters will have the opportunity to vote on restore affirmative action in California. ACA 5 Proposition 16 will be on November’s ballot, giving voters the chance to repeal Proposition 209, which banned the consideration race, sex, or ethnicity in public employment, contracting, and education nearly a quarter of a century ago.

By passing Prop 16, voters would place California—currently only one of 8 states to ban affirmative action—in line with most states across the country.

Supporters of Prop 16 underscore its critical role in addressing systematic inequality that continues to place women and racial minorities at a disadvantage in hiring, contracting, and university admissions. Opponents hold an entirely different view. Rather than seeing Prop 16 as a response to discrimination, opponents believe that it would cause more discrimination by privileging race, ethnicity, and gender over merit.

According to survey data from Public Policy Institute of California, registered voters are divided on Proposition 16, with a large share that is opposed at 47 percent, compared to 31 percent who support and 22 percent who are undecided. Whites report the strongest opposition at 51 percent, and are twice as likely to oppose Prop 16 than support it. Latinos are just as likely to oppose Prop 16 as they are to support it at 41 percent. 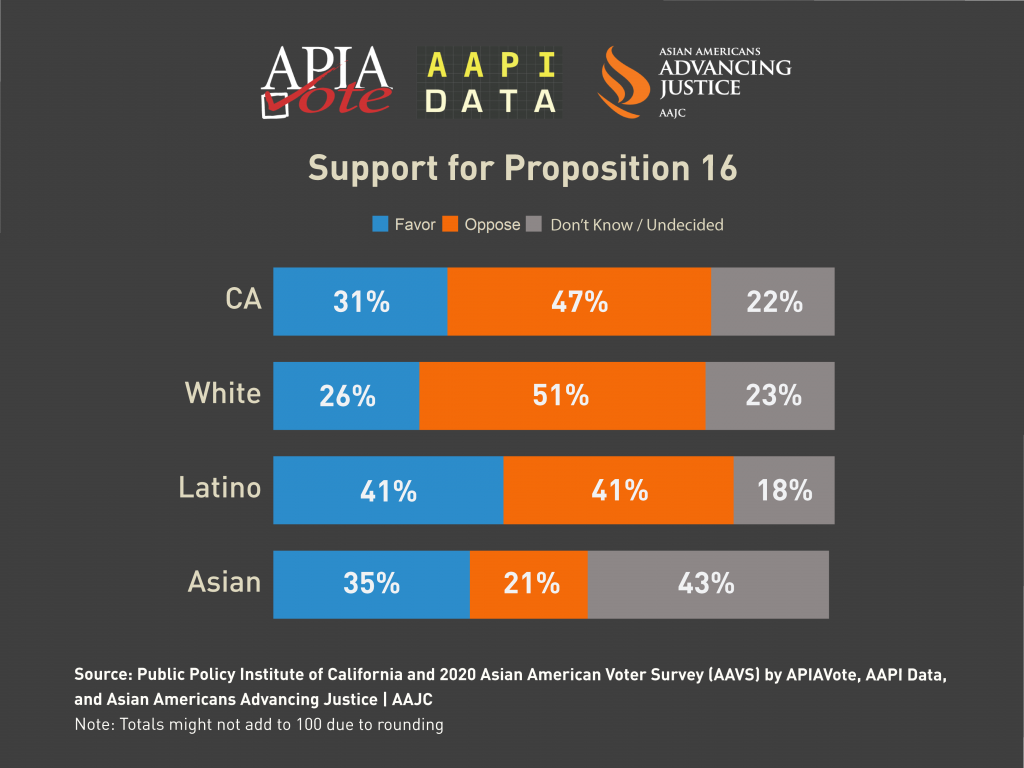 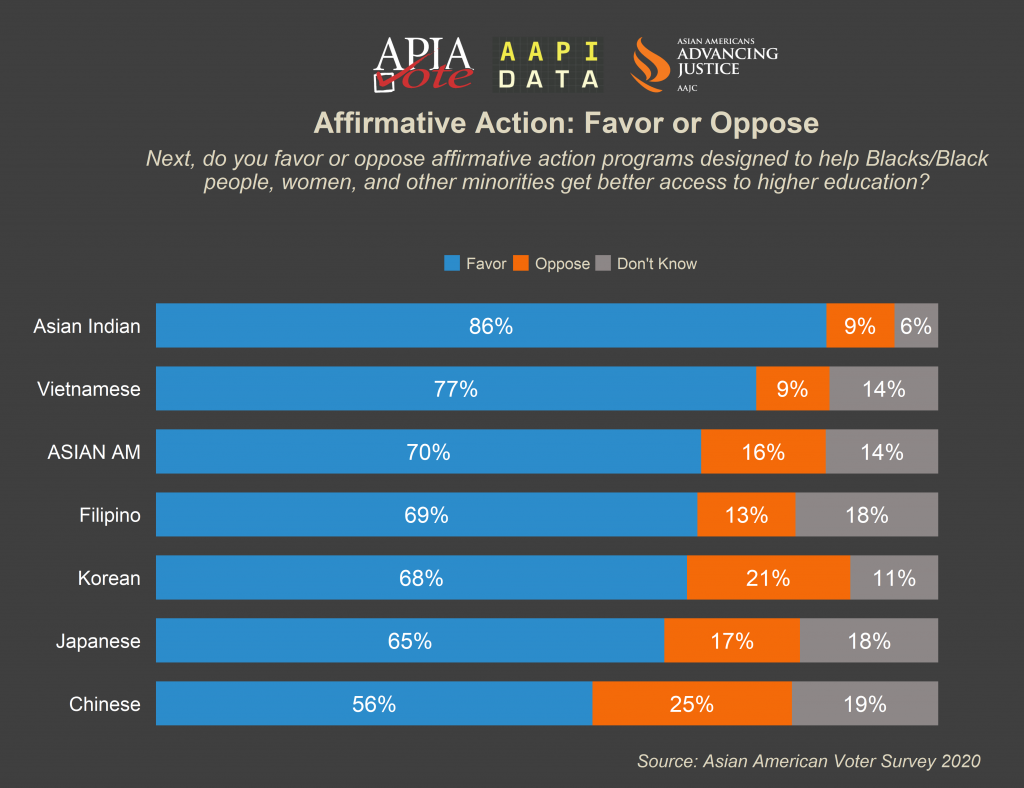 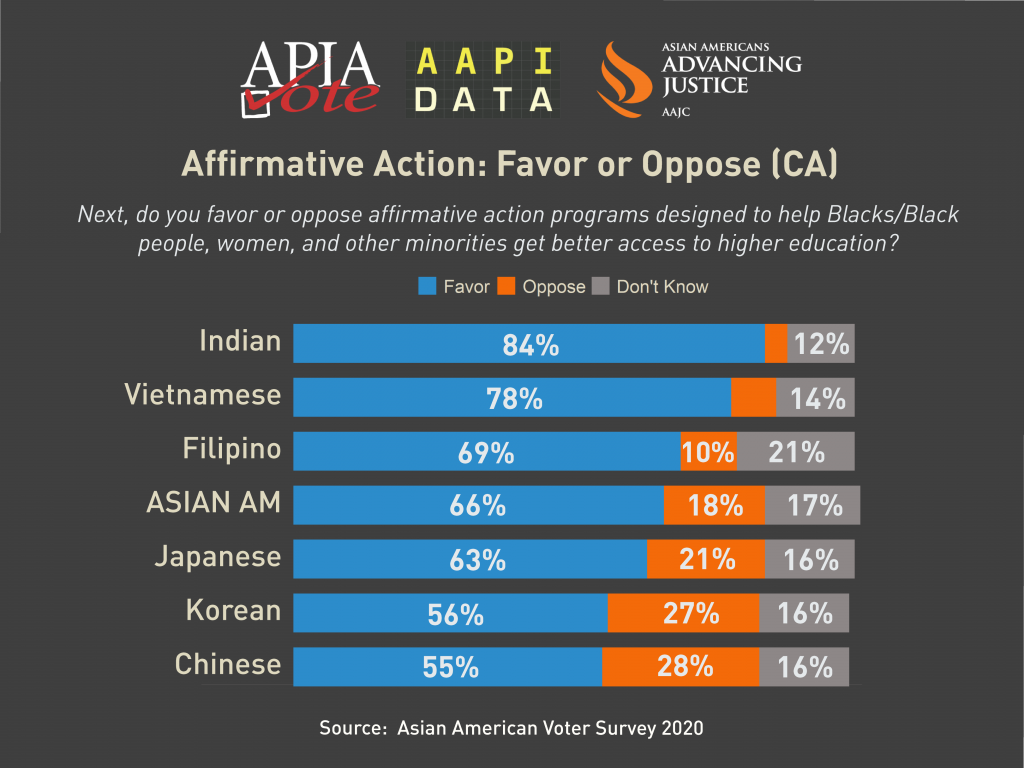 So how do we explain the disconnect between Asian Americans’ attitudes toward affirmative action and Prop 16? We provide three explanations.

First, support for certain policies in theory may not translate to support for particular policies in practice. This is especially true for ballot propositions where voters are asked, in effect, to be legislators and decide to vote up or down on ballot language that is often complex. In theory, the majority of Americans—including Asian Americans—support affirmative action programs designed to give Blacks, women, and other minorities better access to higher education. This aligns with Americans’ commitment to equality of opportunity for all Americans, and more recent calls for racial equity in multiple arenas. At the same time, voters may disagree with the particular application of racial equity when it comes to legislation on public employment, public education, and public contracting.

Second, respondents of the Asian American Voter Survey might not have fully understood the particularities of Proposition 16. The PPIC survey only referred to the title of Proposition 16 as “Allows Diversity as a Factor in Public Employment, Education, and Contracting Decisions. Legislative Constitutional Amendment.” By contrast, the Asian American Voter Survey noted that it “is a ballot measure that would restore affirmative action by repealing Proposition 209, which prohibited the state from considering race, sex, color, ethnicity, or national origin in the operation of public employment, public education, and public contracting.”

The AAVS question was derived from the summary of the measure in Ballotpedia, which is more comprehensive than the Proposition’s title, but also more complex since it discusses the repeal of another ballot proposition that instituted a prohibition.

Bottom Line: Plenty of Room for Persuasion on Prop 16

While opponents of Prop 16 are staunch in their attitudes, 43 percent of California’s Asian American registered voters have yet to reach a decision on Prop 16. With the election less than a month away, there is opportunity to not only reach this undecided population, but there is also room to persuade them. If advocacy groups want to harness the power of the Asian American vote for Prop 16, they would be wise to invest in reaching out to the Asian American population.