Note: This blog post is the first in a series based on the 2020 Asian American Voter Survey

New data from a national survey of 1,569 Asian American registered voters conducted from July 15 to September 10th, 2020 shows that enthusiasm toward the upcoming Presidential election is running high.  A majority (54%) of registered Asian Americans say that compared to previous elections, they are more enthusiastic than usual about voting. The survey included Chinese, Indian, Korean, Vietnamese, Japanese, and Filipino voters and was offered in English, Chinese, Korean and Vietnamese. 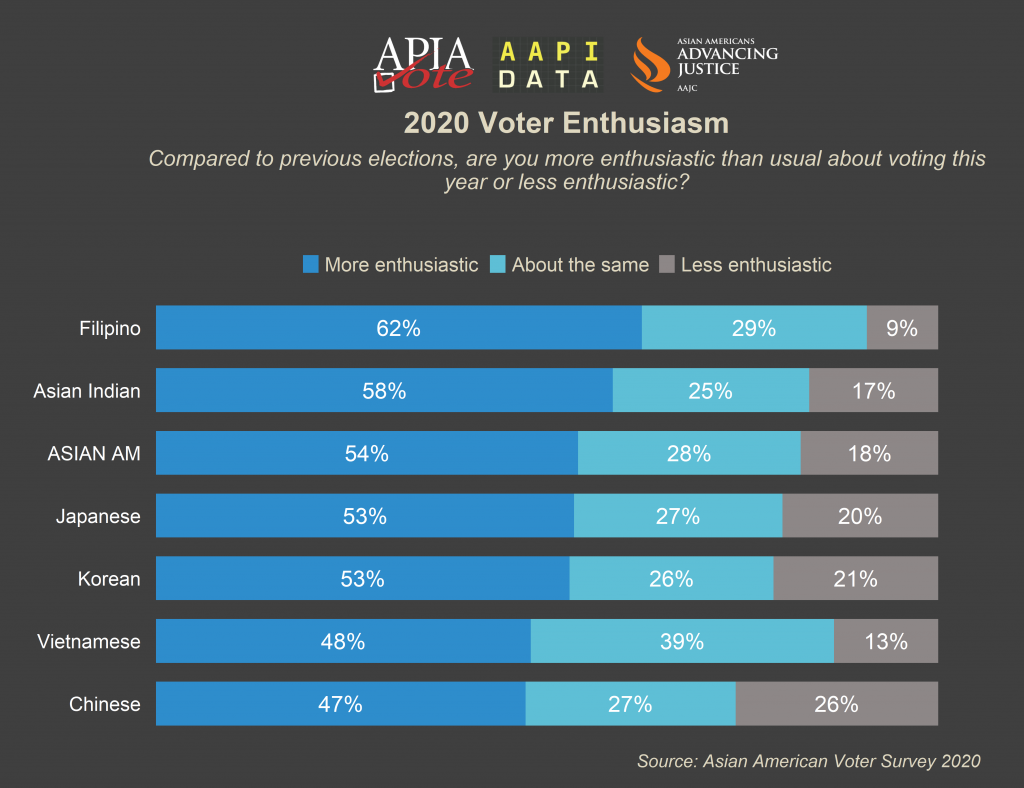 These results, when combined with results from the 2018 election showing record high levels of turnout among nearly every Asian American voting demographic, suggests that the 2020 election will break records for the Asian American vote for a presidential election.

Biden was strongly favored among all national origin groups surveyed, except Vietnamese Americans. Among Vietnamese registered voters, support is higher for Trump (48%) than Biden (36%). Indian Americans are the most inclined to vote for Biden among all Asian American groups (66%). At the same time, 14% of Asian American registered voters remained undecided about their presidential vote choice, with Chinese Americans (22%) exhibiting the highest proportion of voters who said they were “undecided.” 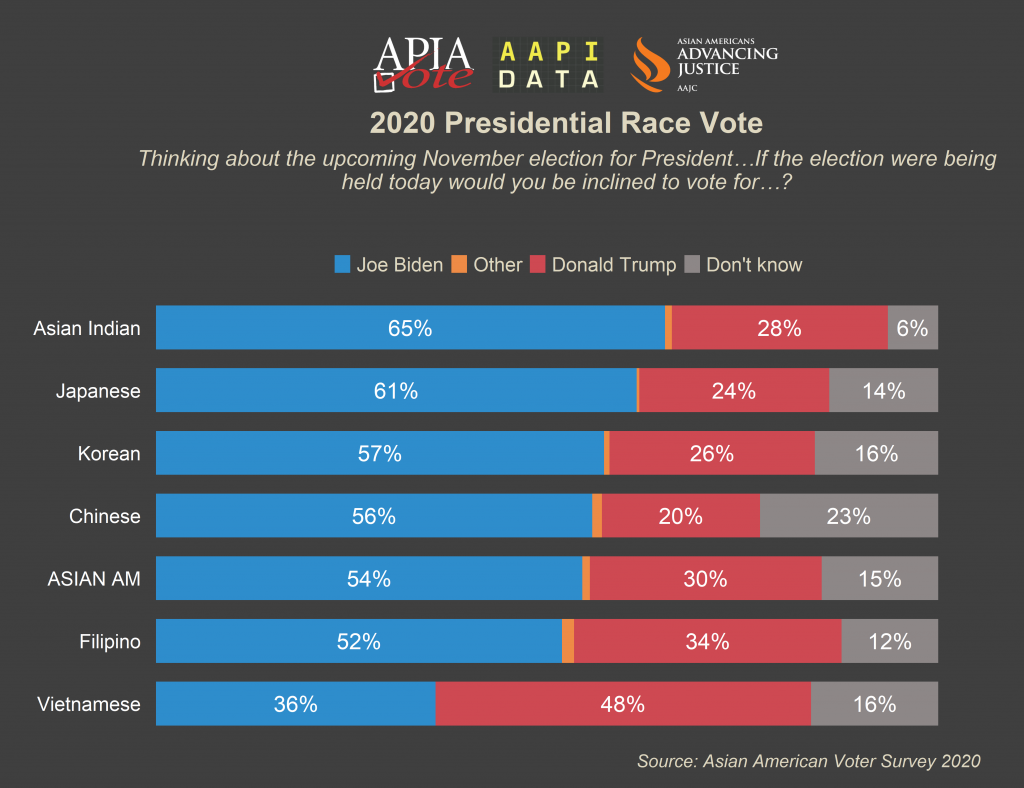 Consistent with this pattern, Biden’s favorability ratings were nearly twice as high as Trump’s among Asian Americans surveyed.

Partisanship, a potent factor in determining vote choice among the electorate as a whole, likely drives these group differences among Asian Americans. Vietnamese Americans are the only Asian American group surveyed that leans more Republican (38%) than Democrat (28%) with a large proportion of those who identify as non-partisan (34%). Although lack of partisanship has long been a feature of the Asian American electorate, Democrats now comprise a larger group of Asian American registered voters (44%) than do non-partisans (32%).

Although enthusiastic about voting, Asian American registered voters also expressed some concerns about the upcoming election.  Almost half (48%) said they often worry about the possibility of election interference in November. In addition, almost half worry about the health and safety of voting in-person at the polls due to COVID-19.  Perhaps as a consequence, most Asian American registered voters (54%) said they prefer to vote by mail or vote by absentee ballot, rather than to vote in-person (26%) on Election Day.  This was a preference of all of the groups surveyed, though Vietnamese Americans were more willing to vote in-person on Election Day than other Asian American groups. 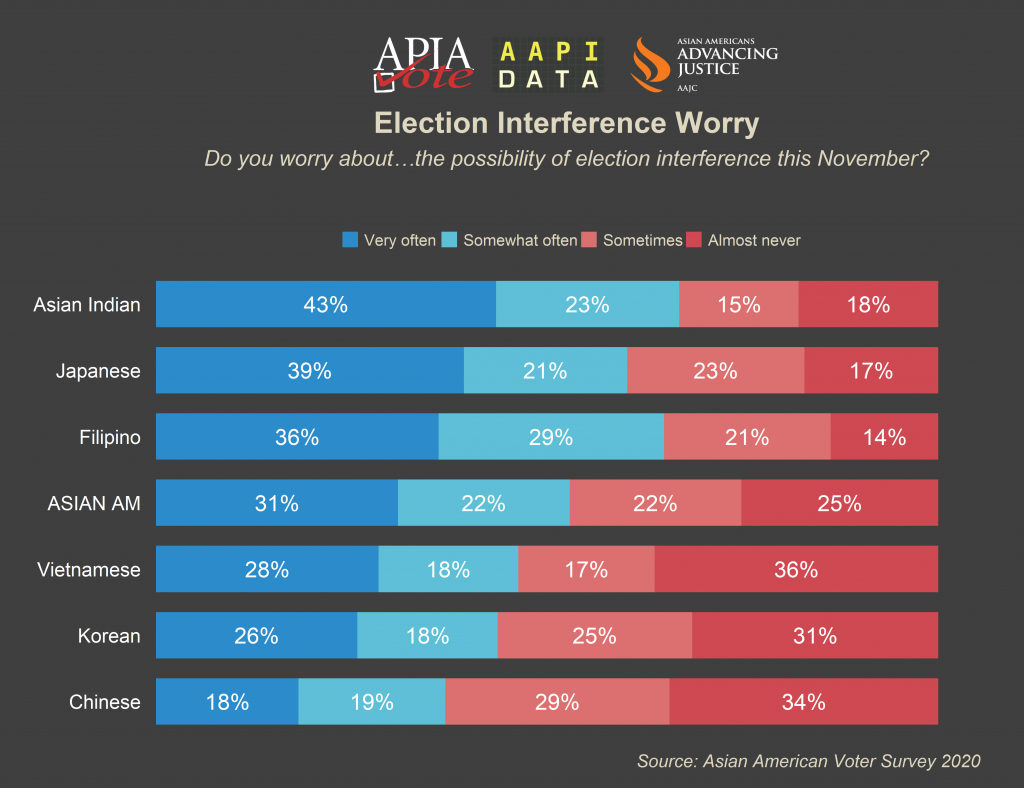 Asian Americans are the fastest growing racial group in the electorate and comprise a critical mass in Presidential battleground states like Arizona, Pennsylvania, and North Carolina.  Political parties have yet to harness the power of the Asian American vote, however. The 2020 Asian American Voter Survey shows that only about half of all respondents were contacted by either major political party.

This post presents the results of interviews conducted by telephone and online from July 15 to September 10, of 1,569 registered voters who identify as Asian American, producing an overall margin of sampling error of +/- 2%. Sampling was targeted towards the six largest national origin groups that together account for more than 75% of the Asian American adult citizen population. Interviews were conducted in English, Cantonese, Mandarin, Korean, and Vietnamese, and included landlines, mobile phones, and web surveys.

The sample sizes by ethnicity are as follows, along with an estimation of the margin of error associated with each sample size (in parentheses):

Sampling error from the size of our sample is only one type of error possible in surveys like the 2020 Asian American Voter Survey (AAVS). Findings may also be subject to variation from question wording, question order, and the time and date when the survey was conducted. The findings in this report are weighted statistically to account for any demographic differences of interest between the sample and population parameters for analyses of the national Asian American population, as well as for subgroups of the population, on the following dimensions: size of group within a state, educational attainment, gender, age, and nativity.