The new year started with a series of important developments involving the 2016 presidential election and Asian Americans and Pacific Islanders (AAPIs). First, on January 7, Hillary Clinton became the first major presidential candidate to hold an event exclusively devoted to AAPIs. The event was held in the San Gabriel Valley, a heavily Asian American suburban area of Los Angeles, and represented by Judy Chu (D-CA).

The following week, Governor Nikki Haley (R-SC) delivered the Republican response to the State of the Union address, where she referenced her Indian American heritage and called for and end to the angry rhetoric on issues like immigration. That same week, Hillary Clinton announced the formation of an AAPI Leadership Council, with support from over 150 elected officials and community leaders, and a new SuperPac, AAPI Victory Fund, held its national launch, aiming to register and mobilize AAPI voters in key states like Virginia, Nevada, Colorado, and Florida.

Asian Americans and Pacific Islanders are gaining attention earlier in 2016 than in the 2008 and 2012 elections. Here are three charts that help to understand why AAPIs are fast gaining political attention. First, the Asian American electorate is growing rapidly, nearly doubling over 12 years, and on pace to grow by more than 600,000 voters in each presidential cycle. 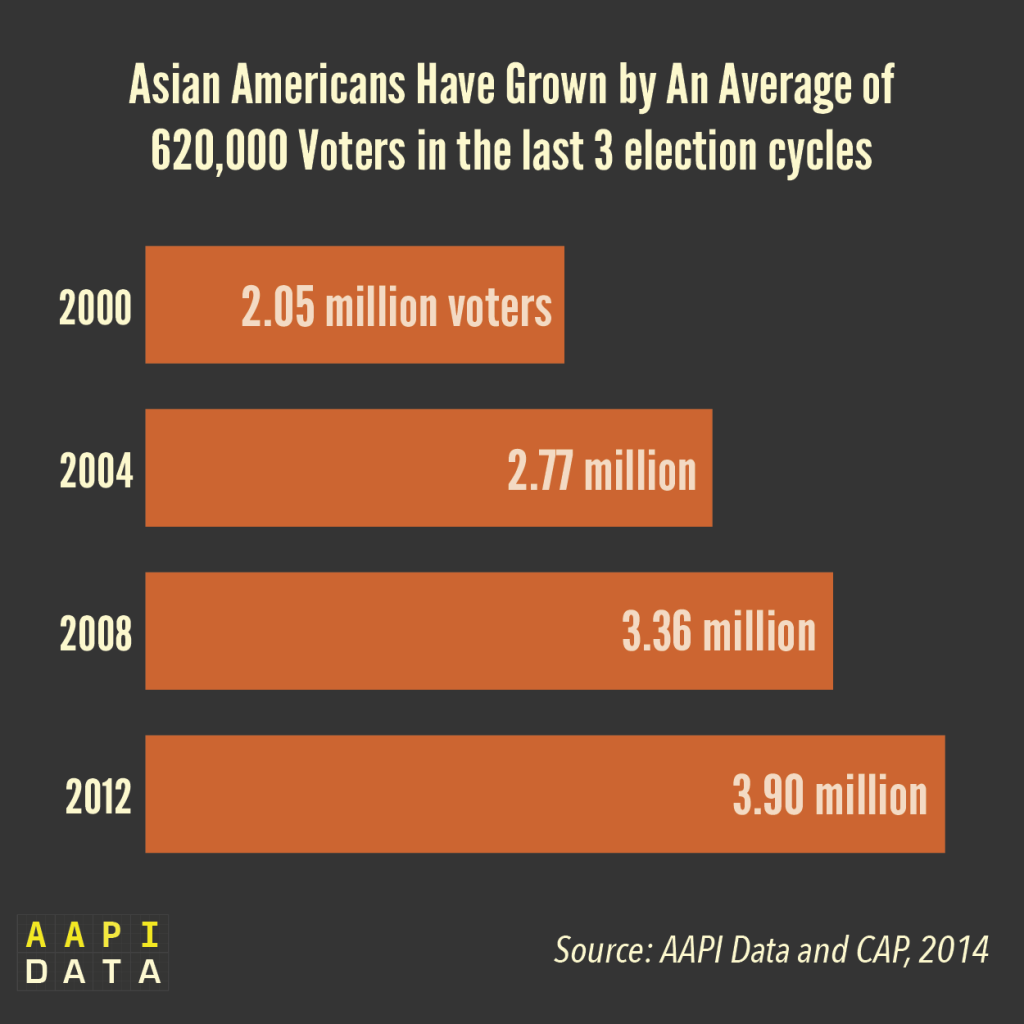 Next, while AAPIs tend to be concentrated in “blue” states like California and New York, they are also rapidly growing in battleground states like Nevada, Virginia, and Florida. We can expect these states to remain important in the presidential election and AAPI mobilization in 2016. 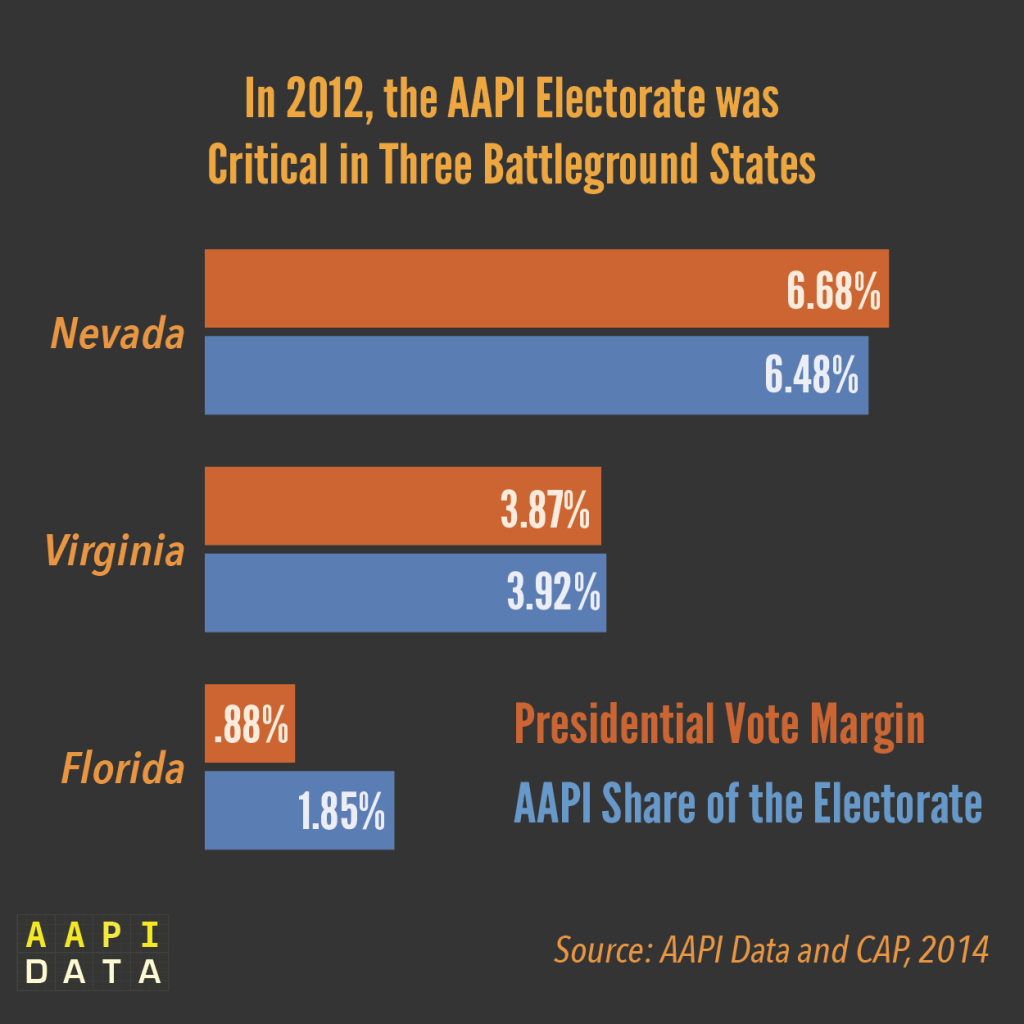 .Finally, looking beyond the presidential election, Asian Americans and Pacific Islanders are an important part of the electorate (or adult citizens) in many states and localities. The numbers are especially impressive when considering Congressional Districts, where AAPIs are 10% or more of the electorate in 93 districts, with the potential to play an important role in the primaries as well as the general election in November. 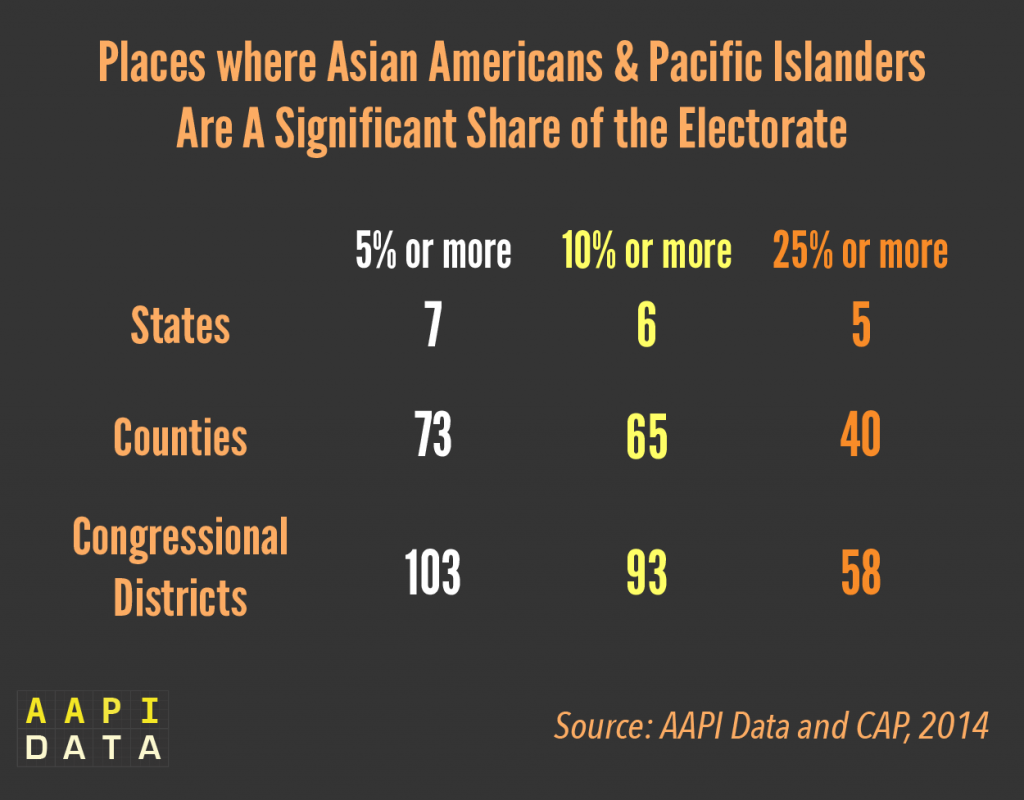