50 years ago this week, President Lyndon Johnson signed into law a major shift in the country’s immigration laws. The 1965 Immigration and Nationality Act made family unification and skills-based migration the bedrock principles of immigration to the United States, marking a significant departure from restrictive national origin quotas. These national origin quotas first affected Chinese immigrants, with the passage of the 1882 Chinese Exclusion Act and continuing through further expansions of Asian exclusion, including  the demarcation of an Asiatic Barred Zone in 1917.

When the 1965 law was implemented, many government officials thought that the elimination of national origin quotas would mostly benefit Southern and Eastern European countries, who faced their own set of restrictive quotas with the 1924 Immigration Act.

It was soon apparent, however, most Europeans were not interested in migrating to the United States, and a growing share of Asian, Latin American, and African immigrants started arriving, first under skilled visa provisions of the 1965 law and later, under its family reunification provisions. 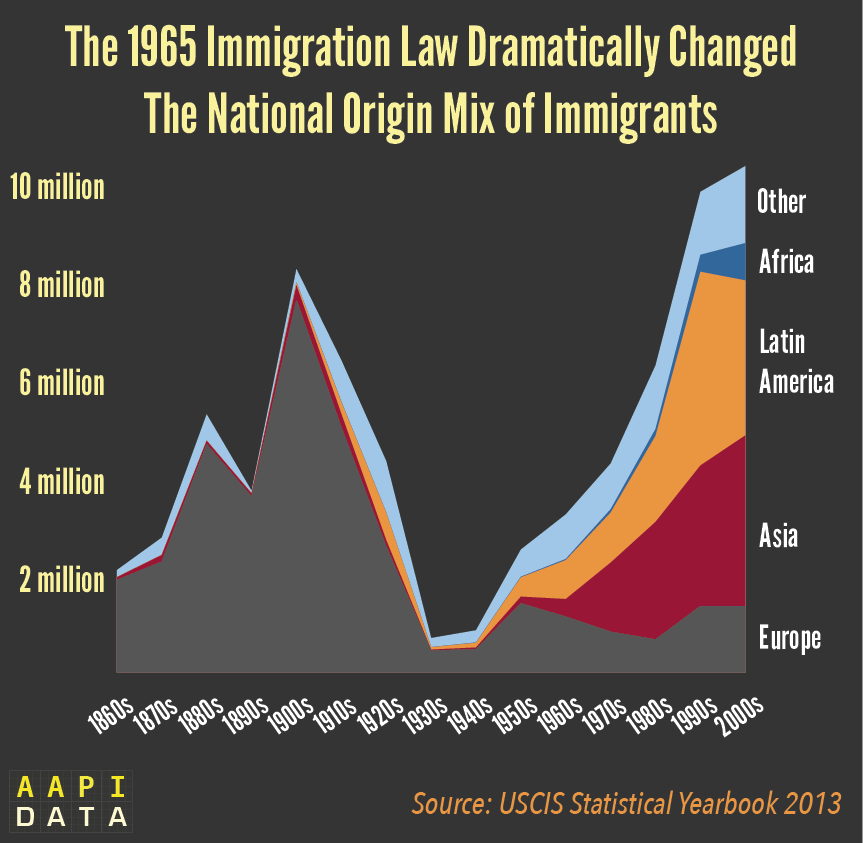 Much less appreciated, however, is how the 1965 law also changed the face of Asian America.

Even though the first major immigration law in the United States was the 1882 Chinese Exclusion Act, followed by the 1907 Gentleman’s Agreement that discouraged migration from Japan, these two groups still constituted the vast majority of Asian Americans (over 80% in 1900). The share of Asian Indians grew in the early 1900s, but Chinese and Japanese Americans still accounted for about two-thirds of the AAPI population, as shown below.

After 1965, however, we saw a dramatic shift in the Asian American and Pacific Islander (AAPI) population, with Chinese and Japanese immigrants accounting for a shrinking share of the overall AAPI population. Now, Japanese Americans account for a much smaller share of the AAPI population than they did a century ago. At the same time, the population of South Asians (such as Indians and Bangladeshis) and Southeast Asian Americans (such as Filipinos and Vietnamese) increased dramatically. Today, South Asians and Southeast Asians account for the majority of Asian Americans in the United States.

Thus, the 1965 Immigration and Nationality Act was important, not only in altering the racial landscape of the United States, it was also critical in changing the face of who represents Asian America.